A Revolution in All Its Implications 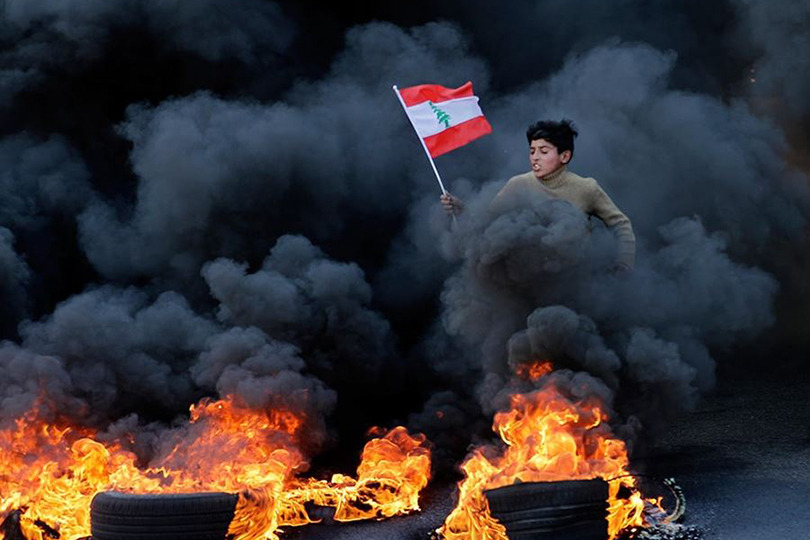 We are happy to introduce a new section in Diwan that includes authors from outside Carnegie. While the blog has been and will remain primarily an in-house platform, two of our features have involved introducing views from outside the institution—interviews, naturally, and Inquiring Minds. In order to vary our content, we have decided to alternate our new feature, Dispatches, with Inquiring Minds, which has been on hiatus in recent weeks until it resumes in the fall. As the name suggests, Dispatches will generally take the form of reports or postcards from locations or situations that are in the news. As Lebanon nears the first anniversary of the uprising against the political elite in October 2019, this dispatch is the first in a series, published in the context of our Decoding Lebanon project, examining how the different Lebanese regions responded to that event and how things have played out since then.

The protests that rocked the town of Nabatieh in south Lebanon beginning on October 17, 2019, changed the life and history of an entire community. Their impact was so profound that the term “movement” barely suffices to describe the protests. What took place was a revolution, with its political, cultural, and social implications.

The Nabatieh protests sparked a string of changes, breaking with stereotypes and modes of operation that have hung over the region for decades. First, and most importantly, it smashed the narrative, promoted by the two major Shi‘a parties, Hezbollah and Amal, that Lebanon’s Shi‘a community was a single, coordinated bloc united behind them. The protests augured the birth of a third bloc, both dynamic and cohesive, that had a loud voice, social depth, a solid popular base, a nationalist outlook, and political demands that differed from those currently dominating Lebanon.

Second, the protests sparked a discovery and recognition of the “other” by many Lebanese—both other citizens and other geographical spaces. Lebanese Shi‘a had long been reticent about such mixing, fearful of differences and suspicious of strangers. This was a trap deliberately set by the elites of Hezbollah and Amal to impose their authority over the community. The relationship between sect as representing an obligation to Hezbollah or Amal on the one hand, and the deterioration of public awareness of the concept of citizenship on the other, had given rise to the phenomenon of political and religious belonging through a single prism. This prism held that the force of arms dominated any partnership and intolerance trumped the right to disagree.

Another shift was that, for the first time, the Shi‘a community that had long been a recruiting ground for the resistance and had guaranteed Hezbollah’s geopolitical clout, dared to challenge the party’s chief, Hassan Nasrallah, rejecting his orders to leave the streets. This was unprecedented among the Shi‘a since Nasrallah took over leadership of the party in 1992.

Furthermore, the “revolutionaries” of Nabatieh adopted the slogan “All of them means all of them!” In that way they repeated what Lebanese everywhere were saying, namely that the country’s political leadership in in its entirety was corrupt. For the first time, even the most senior Hezbollah and Amal officials were not spared the criticism aimed at the political class. This challenged Hezbollah’s claim to virtue and Amal’s narrative of tackling poverty. It also provoked the two parties’ core supporters across the country, not just in Nabatieh—especially backers of Hezbollah. These supporters distinguish between Hezbollah officials and those of Amal and other ruling parties, and consider the work of the party’s ministers and parliamentarians to be an extension of the struggle waged by its fighters, which honors the blood of its martyrs. The Nabatieh protestors have paid a high social and economic price for their blanket criticism of the political class.

In another major change, the uprising in Nabatieh shone a light on graft and theft in the south. Protestors identified corrupt officials by name, including a senior politician and his wife. They also targeted Hezbollah ministers and parliamentarians, as well as party cadres who occupy official positions and dominate the town’s municipal council. This was a break with the notion of ignoring corruption to “protect the resistance,” and reflected an attitude in which Hezbollah and its allies were viewed as part of a single group that dominates the country, ignores official theft, and makes corrupt deals, while riding roughshod over people’s rights.

A further achievement of the Nabatieh “revolutionaries” was to carve out an official, fixed protest space for protests, despite playing a cat and mouse game with Hezbollah and Amal supporters. The protestors established a solid claim to the square next to the municipal headquarters as a permanent protest arena, complete with a protest tent. Though the tent was burned or destroyed on more than one occasion, this was a historic achievement in an area that does not recognize any political faction other than the two main parties—where indeed no political or opposition faction that is not allied with Hezbollah and Amal can gain a foothold.

Another key shift was the participation of women in the protest movement, breaking a stereotype that had long dominated the region’s identity. For decades, the only women able to play an active role in the political, cultural, and social life of the south had been those who wore a hijab, and specifically the “ideologically veiled”—those who walk behind men, the mothers, wives, sisters, or daughters of martyrs or fighters.

But in the demonstrations of October 17 and the weeks that followed, women far outnumbered men. They were the effective leaders of the revolution, enthusiastically demanding change, leading the protests with their faces uncovered, singing and dancing to nationalistic music, chanting loudly, despite religious traditions that regard women’s voices as shameful. With their determination and stubbornness, combined with being women and mothers, they were able to calm tensions when demonstrators were attacked by Hezbollah and Amal supporters.

The protests also saw Lebanon, the nation, returning to Nabatieh, complete with its flag and national anthem. Throughout decades of domination by the two parties, the Lebanese flag had largely disappeared from the south, replaced by the yellow Hezbollah flag and the green one of Amal. October 17 brought back the national flag, which Hezbollah and Amal loyalists even began calling the “flag of the revolution.” For years the national anthem had only been heard behind the walls of certain schools during national holidays. It had been replaced by the Hezbollah anthem “The Party of God is Victorious” and that of Amal (Arabic for hope), “Onwards to Glory, Hope!” Suddenly, the national anthem was heard again in the streets, in the squares, and during protest marches.

Finally, music was also heard in the streets of Nabatieh, the city of pious Shi‘a, the city of mourning and self-flagellation (during the commemoration of ‘Ashoura), the city of religious songs and party anthems. It was possible to see young men and women holding hands, performing the traditional Dabkeh dance in the streets, women walking alongside men throughout the city, ignoring gender segregation. This was all due to the October 17 uprising, which turned Nabatieh, long dominated by party militarism and ritual escalation, into a civil space again.

The Nabatieh uprising was a moment of profound change for Lebanese Shi‘a. It was a moment of major, open opposition to the religious and political establishment, closely resembling the Antelias uprising during the 19th century that sparked the first popular movement against the Maronite religious establishment. While the uprising of last October has since waned, it has created the nucleus of a future opposition movement. It has smashed barriers, ruptured the prestige of the leading Shi‘a parties, destroyed idols, challenged the sacred, broken the siege, and done away with the myth that Hezbollah and Amal ruled over their community with its absolute agreement and represented the Shi‘a without question. For the first time, besieged Shi‘a, who had been enlisted as part of a vast ideological map spreading from Yemen to Bosnia, chose to take part in national events within their own country.

The protests in Nabatieh made it clear that there is a public desire for change and openness, and that their allegedly “unified” identity was a delusion. Such an identity was part of a conspiracy that sectarian and local leaders in the south had become expert at weaving in order to maintain their privileges, with no concern for their people’s needs.

Lebanon’s Food Insecurity and the Path Toward Agricultural Reform