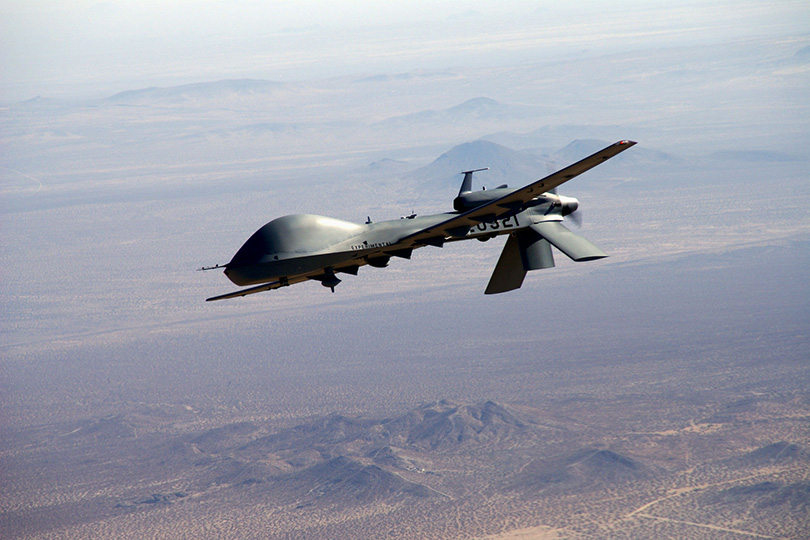 The increased use of drone warfare globally is raising the issue of the proliferation of drones. Several countries have agreed to set out international standards for the use of military drones. However, some of the major producers of drones refuse to sign on.

Although the focus is on large drones like the armed Reaper and Global Hawk drones that can carry missiles, there are many others made by many companies around the world. In fact, over 90 countries use drones in their military – usually for tactical reconnaissance. However, over a dozen possess and have employed armed military drones that can take out a target.

One drone technology that has been ignored in the reporting on drones is the micro drone. One example is the 1” x 4” Black Hornet that is used by British soldiers to look over walls and around corners in Afghanistan. They are made by the Norwegian company Prox, can fly for up to 25 minutes on one charge of its battery, and transmit images up to a mile away.

One weakness of the micro drone is that it is extremely sensitive to wind. Obviously, its size also limits the payload. Larger drone can operate in higher winds and can carry more batteries and sensing devices.

Small tactical drones like the French FULMAR can fly for 12 hours and travel up to 90 kilometers. They are launched by a soldier throwing them into the air much like a toy glider.

The “Work Horses” of the drone fleet is the medium sized reconnaissance drone. These are the high endurance drones that can operate either at high or medium altitude.

An example of this class of drone is the Heron, made by Israeli Aerospace Industries. It has a wingspan of over 16 meters and can fly for up to 52 hours at an altitude of 35,000 feet – the same altitude as commercial jetliners.

The Israeli Heron has been purchased by Germany, the US, Canada, India, Turkey, Australia, and Morocco. Some unconfirmed reports suggest Gulf states acquisitions.

Another drone that has many hours of duty in nations like Afghanistan and Kosovo, is the German LUNA. It only has a range of 100 kilometers. Germany, Saudi Arabia, and Pakistan have it in their arsenal.

The drones that are best known are the large combat and surveillance drones. These can be operated by operators thousands of miles away and use difficult to intercept satellite communications. Their payload can include air-to-surface missiles and laser guided bombs. They can travel over a thousand miles and have flight times over 14 hours. Two examples are the American Predator and Reaper.

These drones also have non-military applications like communications interception. They can scan mobile phone calls and locate targeted individuals or groups.

Several NATO nations like Spain, France, Britain, and the Netherlands own the American made Reaper.

China has a Reaper rival that looks similar. It is the CH-4 and it has been purchased by Egypt and Iraq.

As impressive as these large drones are, they are expensive. The Global Hawk costs $131 million apiece. That does not include the infrastructure costs that include building a facility that can launch, recover, and maintain such a large complex machine. It also includes a complex command control facility that can control the drone via satellite – a satellite that (obviously) belongs to the country operating the drone.

The biggest is the United States, which carried out its first drone strikes in 2001 in Afghanistan. They currently have several armed drones and are a major exporter of drones.

Israel does not publicly acknowledge that it has armed drones, but there are several reports that they have been used. They have been employing them since 2004, but first produced them in the 1990s.

The United Kingdom purchased the Reaper drone from the US in 2007 and armed them in 2008. They have armed their drone (now called the Protector) with domestically produced Brimstone 2 missiles. The UK has also worked with Israel to create the Watchkeeper tactical drone.

Iran has been producing drones since2010. Their current armed drone is the Shahed 129. Recently, as last week Iran unveiled its new Kaman-22 drone, which seems modeled on the U.S. -made MQ-1 Preditor, with other features from the more advanced MQ-9 Reaper.

The UAE has drones from several nations, including the US and China. They purchased the Predator drone from the US in 2013. They also have a domestically produced drone that was first flown in 2013.

It is difficult to name the best combat drones because different countries have differing operational needs. In addition, some drones are still secret, and many have not been in combat yet. The ones in this article have had operational experience under combat conditions and are recognized by experts as the top five drones.

Russia’s S-70 Okhnik. This drone was produced by the aircraft design firm Sukhoi in 2018. It looks much like America’s B-2 bomber and is made of stealth materials to make it invisible to radar.

Turkish Bayratar TB2. This is a tactical medium altitude drone with a long flight duration. Some of the design copied the Israeli Heron drones purchased from Israel. It can fly for over 24 hours.

Although designed for surveillance, the Bayratar can carry two anti-tank missiles and laser guided ammunition. It supposedly can drop a bomb within a 3-meter square target.

American MQ-9 Reaper (Predator). This design has been in operation since 2003. It can carry up to 14 Hellfire missiles in one configuration. It can carry two laser guided Paveway missiles.

It can remain airborne for up to 14 hours.

This drone has considerable operational time in the Middle East, especially in Afghanistan and Iraq. It has reduced the need for F-16 manned aircraft.

Israeli Heron. This surveillance drone can remain airborne for up to 45 hours and can operate for most of its mission without an operator. It was used in the Gaza Strip in 2008 – 2009.

The French have modified the Heron to create the Eagle drone.

American GASS Avenger (Predator C). This drone was produced by General Atomics Aeronautical Systems (GASS). It can carry up to 1,000 kg of weapons or electronics. It was designed to operate off aircraft carriers.

It has improved stealth protection and presents a smaller heat signature. It is designed for communications with satellites but is opaque to lower frequencies that are used by missiles and aircraft. It has many stealth technologies copied from the F-22 and F-35 aircraft.

A constant of military technology is that for every advancement made, a countermeasure is soon developed. It is the same for drones.

Anti-Drone tactics are not new. On December 4, 2011, a RQ-170 Sentinel crashed into the Iranian countryside. Iran claimed its electronic warfare unit brought the plane down. The Pentagon said the aircraft was flying over western Afghanistan and crashed near or in Iran.

However, the drone was found 140 miles inside Iran’s borders. Although the US dismissed the idea of Iran’s military having the technology to down one the most sophisticated drones in the world, it appears the Iranians Sflight. Dailytech.com later reported.

“The team then use a technique known as ‘spoofing’ — sending a false signal for the purposes of obfuscation or other gain. In this case the signal in questions was the GPS feed, which the drone commonly acquires from several satellites. By spoofing the GPS feed, Iranian officials were able to convince it that it was in Afghanistan, close to its home base. At that point, the drone’s autopilot automatically kicked in and triggered the landing. But rather than landing at a U.S. military base, the drone was captured at an Iranian military landing zone.

Obviously the Iranians had acquired the complex ability to give the drone the proper forged distance and find an appropriate altitude landing strip to make sure the drone landed as it did in Afghanistan.

Drones are not only vulnerable to spoofing, but their communications can also be jammed, which would probably end its mission by forcing the drone to return to its home base. Already, some vulnerable parts of the US like the White House and Capitol are guarded from drone attacks by sophisticated electronic countermeasures.

Lasers are also seen as a potential protection against drones. Some systems are already in operation that can damage sensitive drone systems; however, more powerful laser weapons are in the works.

The US Army appears to be developing a laser weapon that is “a million times stronger” than anything ever used before. The new weapon will deliver a short burst for a quadrillionth of a second that vaporize a drone or other projectile. It is called the Ultrashort Pulsed Laser (UPSL) and can also destroy electronics by acting as an electromagnetic pulse weapon (EMP).

High energy lasers with energy levels of over 100 kilowatts are expected to be used with the 6th generation fighter.

A prototype model of the UPSL could be ready next year. This was a major project under the Trump Administration, but there is no clear signal from the Biden Administration about its future.

Obliviously, as past military history shows, drones are the weapon of today, but may be the obsolete weapon of tomorrow.