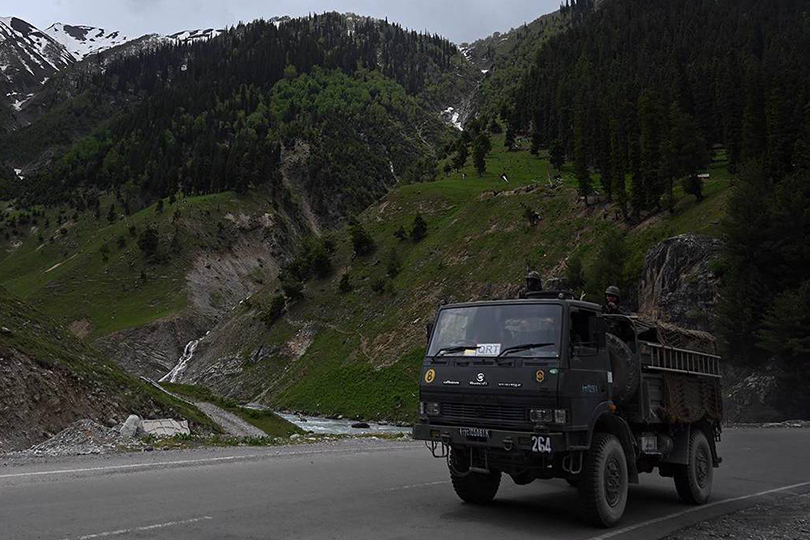 With the world's attention focused on the pandemic, Chinese troops have been establishing fixed positions in areas that even it considers to be on the Indian side of the disputed Line of Actual Control. The message is clear: China is now the region's preponderant power, and everyone else should fall in line.

COVID-19 isn’t the only threat that has crossed India’s borders this year. According to alarming reports from India’s defense ministry, China has deployed a “significant number” of troops across the disputed Line of Actual Control (LAC) along the countries’ Himalayan frontier. So far, these transgressions have occurred at four points on the world’s longest and most highly disputed border, with thousands of Chinese troops showing up in Sikkim and in parts of the Ladakh region, northeast of the Kashmir Valley.

Neither government disputes the fact that Chinese soldiers have occupied territory that India considers its own. Notwithstanding a brief but bloody war in 1962 that ended with the humiliation of India’s underprepared army, China and India have managed an uneasy but viable modus vivendi on their common border for nearly half a century. No shots have been fired in anger since 1976, and both countries tend to downplay each other’s troop movements, citing “differing perceptions” as to where the LAC – which has never been officially demarcated – actually lies.

Owing to these fraught conditions, an estimated 400 faceoffs occur each year along the LAC, all of which are quickly defused. But this time is different. Chinese troops have reportedly advanced into territories that China itself traditionally considers to be on the Indian side of the divide. And rather than merely patrolling, they have established a fixed presence (with pitched tents, concrete structures, and several miles of road) well beyond China’s own “Claim Line,” occupying the “Finger Heights” near Pangong Tso Lake.

Obviously, these encroachments have met with resistance. Last month alone, there were two physical clashes between Indian and Chinese soldiers, with brawls resulting in dozens of injuries on both sides. Though the two armies had a similar standoff on Bhutan’s Doklam Plateau in 2017, that was in a third country. This time, India has every reason to interpret China’s incursion as direct aggression.

True, the Doklam standoff ended with a Chinese climbdown, as did a similar episode in the same part of Ladakh during Chinese President Xi Jinping’s first visit to India in 2014. But the China of 2020 is stronger, more assertive, and eager to throw its weight around in a new era of Sino-American “decoupling.” It will be less inclined to withdraw unilaterally this time.

Still, the world is taking notice. Recent statements by US Secretary of State Mike Pompeo and Russia both expressed growing concern, despite Chinese officials’ statement that the situation is “overall stable and controllable.”

But the problem is not that China is planning an all-out war or a major military campaign. Rather, it is using “salami tactics”: minor military incursions that inflict small-scale military setbacks on India. Most likely, the Chinese will occupy a few square kilometers of territory for “defensive” purposes, and then declare peace. This approach is nothing new, and it poses a test of India’s resolve.

Because India’s government cannot afford to take China’s latest aggression lying down, it is reportedly already preparing for a long standoff. Indian Prime Minister Narendra Modi’s nationalist “strongman” regime, especially, cannot risk losing face before India’s easily inflamed public. But even under a different government, India would have a strong interest in proving to would-be aggressors – not least Pakistan – that it is no pushover.

To be sure, China may argue that it was provoked by India’s infrastructure construction along the LAC. But these projects are long overdue. Two summers ago, the Indian parliament’s External Affairs Committee (which I chaired at the time) visited the border areas and found the infrastructure there to be woefully inadequate. China, meanwhile, has been building all-weather roads, railway lines, and even airports on its side of the LAC. It also boasts conventional military superiority over India, both in the LAC area and overall; but India has shorter supply lines to maintain in the mountainous terrain.

The India-China relationship is nothing if not complicated. The wounds of the 1962 war never healed, yet annual bilateral trade has grown to almost $100 billion, albeit overwhelmingly in China’s favor. Moreover, China uses its alliance with Pakistan to needle, distract, and confine India within its own subregion. The China-Pakistan Economic Corridor, one of the crown jewels of Xi’s Belt and Road Initiative, runs through portions of Pakistan-occupied Kashmir that even China acknowledges as disputed territory.

China also continues to reiterate its claims to Indian territory directly, particularly the northeastern state of Arunachal Pradesh, which it describes as “South Tibet.” Against this backdrop, episodes like the current standoff should be understood as part of a larger strategy of keeping India in check.

Indian foreign-policy analysts understand this, warning that, because the latest act of Chinese belligerence clearly marks a shift in the longstanding status quo at the border, it augurs the end of China’s self-proclaimed “peaceful rise.” Under Xi, China seems much more willing to demonstrate openly that it is the region’s preponderant power. By taking a tough stand on the Indian border, China hopes to show the world, especially the United States, that it is not intimidated by Donald Trump’s bluster, and that other Asian countries should fall into line.

For now, Indian officials have announced that high-level military talks with China have produced an agreement that the two sides will “peacefully resolve the situation in the border areas in accordance with various bilateral agreements.” But, as the standoff has made clear, each side has a very different understanding of what those bilateral agreements mean. It remains to be seen whether China will actually withdraw its troops from the disputed areas. The devil, as always, is in the details.

Clearly, India and China need to finalize a permanent border agreement. China has long argued that a formal border settlement is best left to future generations, but that is because its geopolitical power – and therefore its negotiating position – grows stronger with each passing year. China is betting that the longer a settlement is deferred, the more likely it is to get the border it wants. In the meantime, it will use limited acts of aggression along the LAC to keep India off balance.

How America Can Shore up Asian Order, A Strategy for Restoring Balance and Legitimacy