Helicopter Money Is in the Air 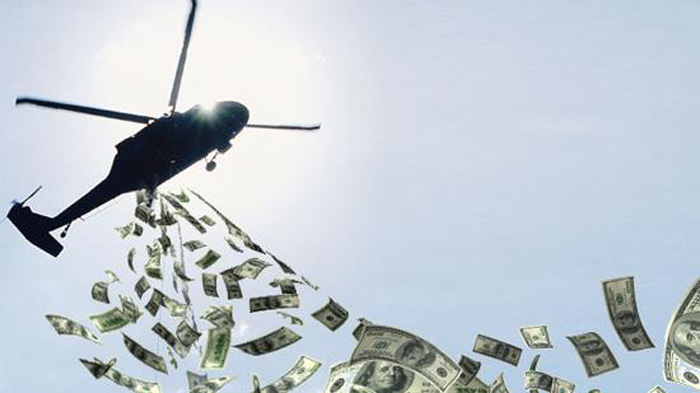 GDP has hardly grown in the last four years, and GDP per capita is still less than it was in 2007

Fiscal policy is edging back into fashion, after years, if not decades, in purdah. The reason is simple: the incomplete recovery from the global crash of 2008.

Europe is the worst off in this regard: its GDP has hardly grown in the last four years, and GDP per capita is still less than it was in 2007. Moreover, growth forecasts are gloomy. In July, the European Central Bank published a report suggesting that the negative output gap in the eurozone was 6%, four percentage points higher than previously thought. “A possible implication of this finding,” the ECB concluded, “is that policies aimed at stimulating aggregate demand (including fiscal and monetary policies) should play an even more important role in the economic policy mix.” Strong words from a central bank.

Fiscal policy has been effectively disabled since 2010, as the slump saddled governments with unprecedented postwar deficits and steeply rising debt-to-GDP ratios. Austerity became the only game in town.

This left monetary policy the only available stimulus tool. The Bank of England and the US Federal Reserve injected huge amounts of cash into their economies through “quantitative easing” (QE) – massive purchases of long-term government and corporate securities. In 2015, the ECB also started an asset-buying program, which ECB President Mario Draghi promised to continue “until we see a sustained adjustment in the path of inflation.”

QE has not been a magic bullet. While it helped stop the slide into another Great Depression, successive injections of money have yielded diminishing returns. The ECB’s announcement of its policy narrowed the gap in bond yields between Europe’s core and periphery. But a study by Thomas Fazi of the Institute for New Economic Thinking emphasizes QE’s lack of influence on bank lending, the increase in non-performing loans, and the dire output and inflation figures themselves. Moreover, QE has undesirable distributional consequences, because it gives money to those who have already have it, and whose current spending is little influenced by having more.

That leaves fiscal policy. The logic of current economic conditions implies that governments should be taking advantage of ultra-low interest rates to invest in infrastructure projects, which would both stimulate demand and improve the structure of the economy. The problem is the climate of expectations. As the Oxford economist John Muellbauer says, treasuries and central banks have been “hammering into the consciousness of the private sector the importance of reducing gross government debt relative to GDP.”

This orthodoxy arises from the idea that borrowing is simply “deferred taxation.” If the private sector believes that taxes will have to rise to pay for government borrowing, according to this view, people will increase their savings to pay the higher taxes, thus destroying any stimulative effect. The orthodoxy mistakenly assumes that government spending cannot generate any extra income; but so long as it prevails, debt-financed fiscal policy is ruled out as a means to revive economic growth.

As a result, analysts and policymakers have started mooting ideas for unconventional fiscal policy to supplement unconventional monetary policy. In particular, they are debating variations of so-called helicopter money, following a famous thought experiment by Milton Friedman in 1969, in which “one day a helicopter…drops an additional $1,000 in bills from the sky.” Former Federal Reserve Chairman Ben Bernanke, among others, has offered influential support for “helicopter drops” to revive flagging economies.

Helicopter money comes in two forms, which could (and should) be dropped together. The first is to put purchasing power directly into the hands of consumers – for example, by issuing each voter or citizen with smart cards worth $1,000 each. The Swiss economist Silvio Gesell, who originally proposed a scheme of “stamped money” at the start of the last century, added a stipulation that balances unspent after a month should be taxed, to discourage hoarding.

Alternatively, helicopter money could be used to finance infrastructure spending. The advantage of such “monetary financing” is that such spending, while adding to the deficit and leading to a permanent increase in the money supply, would not increase the national debt, because the government would “owe” the money only to its own banker. This would eliminate the offsetting negative expectation of higher taxes.

Surely, issuing debt that never has to be repaid is too good to be true, right? There is indeed the obvious danger that governments might easily become addicted to monetary finance to pay for private and public spending, which is why it is unlikely to be tried openly unless economic conditions worsen significantly. But the political risk of doing nothing if we stumble into another recession (as seems quite likely) is worse. Like it or not, unconventional fiscal policy could well be the next game in town.

* Robert Skidelsky, Professor Emeritus of Political Economy at Warwick University and a fellow of the British Academy in history and economics