Kirkuk… the thorny city where to? 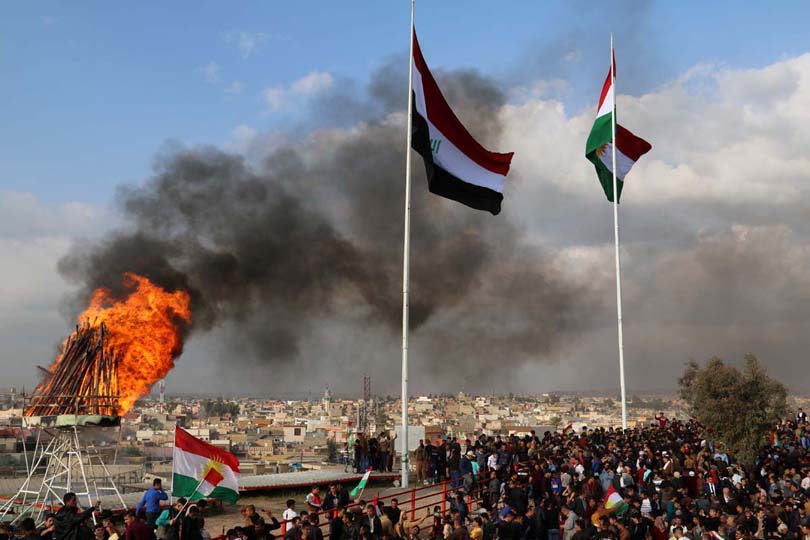 The book, (Kirkuk and its areas.. judgment of history and consciousness), by Dr. Kamal Mudh'hir Ahmed is a documentary study on the Kurdish question in Iraq.

He presented the book to "All Arab who refuses to be a tyrant as much as not to be oppressed".

The author said in a historical briefing that it is well-founded that Kirkuk city was built by the Lulus or Khors, both were people who played a basic role in the formation of the present Kurdish people.

What enhances that the Lulus were the first builders of Kirkuk city, as well as the Khors were living in Kirkuk since the second and first millennia B.C., Kirkuk, was named in two names (Arbakha and Ilyani) which meant the City of the Gods.

This historical fact became a recognized issue, even in the general methodological books, such as referred to in the (Political Geography), which was written by a group of Egyptian professors in 1961.

In this respect, the following was written:

"The Kurds are a dynasty of northern origin, where they had their ancient state with Arabkha (current Kirkuk city) as their capital….).

Iraqi Professor Dr. Fawzi Rasheed summarized the matter in his research under the name (Zagrous Mountains' Inhabitant and Ancient Kurdistan) the relation between the Kurdish ancestry with Kirkuk as follows:

This fact does not negate the strong relationship that connected the Lulus with other ancient inhabitants of Kurdistan, such as the kouts and Khors, either linguistically or civilizationally, particularly if we knew that the center of these people was in nearby areas, as settlements similar to Nouzi of the Khors, Arabkha of the Kouts and Babit of the Lulus, which were situated around current Kirkuk city.

There are other historical considerations and reasons that confirm the truth whether Kirkuk was connected with Baghdad or Kurdistan!

This reply is more than enough for the first and second topics.

As concerning the third topic and its five branches, the summery tells that the Kirkuk question is a thorny question from historical, geographical , political and economic viewpoints starting from the entry of Iraq into the League of Nations and the discovery of the enormous natural wealth of oil and gas in its six fields (Jambour, Southern Bey Hassan, Northern Bey Hassan, Avana, Nana Wa, and Kiwi Pour) till reaching the British rule, the Monarchy rule, the Republican era and the Baathist rule till 2003 and the time that followed.

The differences among the components of the oil-rich Kirkuk province are mounting on the coming local elections that reached to closed ends.

There are three points of differences, which had no solutions till now, namely; auditing the voters' register, the division of power among the components and the fate of Kirkuk city.

The Iraqi government was unable to solve the deep-rooted Kirkuk's crisis since 2003, as well as other continued political differences.

It is not acceptable to put conditions on the local elections of Kirkuk city, particularly passing a law that will guarantee its elections, taking into consideration that Arabs, Turkmen, Kurds and Chaldean-Assyrian people were deprived of the local votes since the past three years, the last one was in 2005.

This cannot be continued the same.

There is a question, why we do not put conditions for Diala, Salahal-din, Nineveh and other provinces of Iraq that have a group of components?

The meetings are continuing among the Kurdish parties to reach a complete agreement on making the referendum, or not conducting it, as well as other details of the matter.

In my opinion, I suggest that the referendum should be made in the disputed areas only to know whether their people are with the establishment of the Kurdish state or with Baghdad, or having their own region, provided that there should be complete agreement among the Kurdish parties on the referendum.

There is another opinion; namely to internationalize the case and put the province under international custody as a move better than cutting it off from Iraq and annex it to Kurdistan.

All these topics and branches will remain open without any development for the public interests, other components and the people of Kirkuk in particular.

There is another question:

When the political parties, with all their components, can cross sectarianism and build the state of the institutions and the state of citizenship?

Then, we may find a solution for all and the rights of the people will be restored.