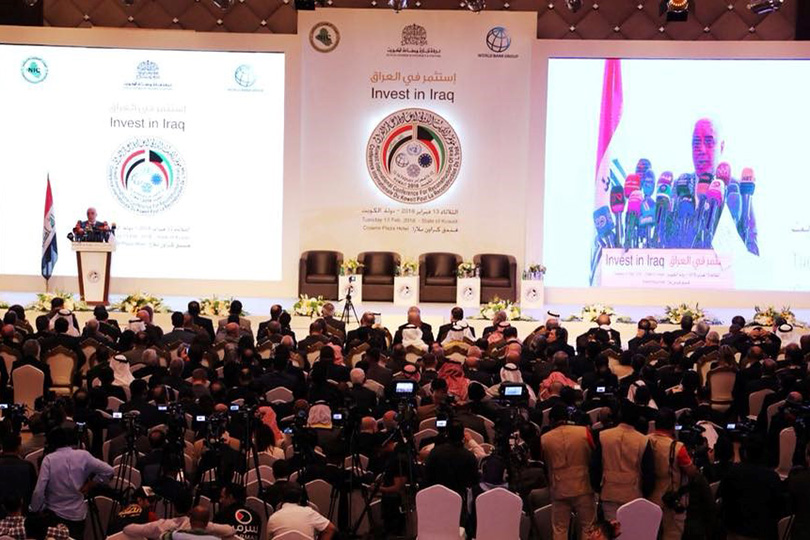 At first glance, a conference on Iraq that raised $30 billion this week may look like a success. But compared to the estimated $88 billion the Iraqi government said was needed to rebuild the country after the devastation wrought by ISIS and U.S.-led airstrikes, the amount sounds paltry. And like most things involving Iraq, its neighbors, and reconstruction, the true picture is far more complicated.

“If we compare what we got today to what we need, it is no secret, it is of course much lower than what Iraq needs,” Iraqi Foreign Minister Ibrahim al-Jaafari said in Kuwait, where the conference was organized. “But we know that we will not get everything we want.”

The days when Iraq got the kinds of sums it asked for at conferences like this one might be over. Many of the usual international donors are tapped out. Some, like the Persian Gulf countries, are focused on internal economic reform and on Yemen, which has been devastated by a civil war that is also proxy war between Iran and Saudi Arabia. Others, such as the United States, have become more inward-looking.

Fareed Yasseen, the Iraqi ambassador to the U.S., acknowledged the challenges of raising money in the current geopolitical climate. “We never thought we’d get that amount [$88 billion],” he told me. “There’s donor fatigue and countries that need international assistance more than we do.”

Still, the countries that pledged funds this week for Iraq illustrate what could be the start of a regional willingness to stabilize the country. Turkey, which has been involved in Iraq’s reconstruction since the end of the war that ousted Saddam Hussein, was the biggest contributor. It pledged $5 billion. The Saudis, who may be wary of the composition of the next Iraqi government (elections are in May and Riyadh doesn’t want pro-Iranian interests to gain power), promised $1.5 billion. Kuwait, which organized the conference, pledged $1 billion; Qatar an additional $1 billion. There were smaller contributions from the United Arab Emirates, Germany, the EU, and the Islamic Development Bank. The United States did not pledge any money, but said it would offer more than $3 billion in financing to help U.S. companies invest in Iraq.

Much of the money will flow into Iraq only if contracts or agreements actually materialize. Still Sajjad Jiyad, who runs the Bayan Center, an Iraqi think tank in Baghdad, pointed out that 76 governments showed up at the conference, along with 1,800 firms, NGOs, and international corporations. “They may not have bid today,” he said, “but … they can go back and apply for credit lines and guarantees and bid on specific projects.”

Michael Knights, an Iraq expert at the Washington Institute, told me that while the top-line numbers might have looked disappointing, there was much to be optimistic about.

“What a lot of people have been impressed with is that the Iraqis have come out in a very mature way and tried to put in a decent amount of effort trying to attract private sector investment to the country, trying to reassure investors, putting on a good show,” he said. “And, I think, this should be viewed more as an investment conference than as an aid conference. That’s the key takeaway there.”

Still, Iraq is only just recovering from the war with ISIS. The cities the terrorists occupied were destroyed—and fixing them is expected to cost $22 billion. Corruption remains a problem, as well. Transparency International ranked Iraq 166 out of 176 countries in 2016, the most recent year for which data are available.

Samya Kullab, a senior correspondent with Iraq Oil Report, a news organization that covers the country’s energy sector, told me that Iraqi officials were aware of the perception among the donor community that the country was corrupt. One way to mitigate that perception was with the establishment of the Iraq Reconstruction Fund, which is run by Mustafa al-Hiti, a highly respected official, who began to work with the World Bank. But, Kullab acknowledged, that won’t entirely solve the problem.

The World Bank’s involvement in the reconstruction is designed to assuage some of the corruption concerns (though the bank’s record in such matters is spotty). Jiyad pointed out that the bank would audit the projects being financed with the funds that are raised. And, he said, Iraqis are asking for a transfer of skills and experience rather cash “because we’ve seen where that leads.”

Jiyad said he was optimistic about the pledges made by Iraq’s neighbors. He said once Saudi, Turkish, or Emerati money flows into Iraq, “you’re going to have less issues between … the governments … because so much money is at stake.”

Or as Knights put it: “A few years ago, these were the countries that a lot of Iraqis believed were the people who backed [ISIS], and who gave them sanctuary and gave them money. Well, now these guys are giving billions of dollars to Iraq instead.”

Importantly, Iraq’s neighbors are looking not just to provide aid, but for investment opportunities in the country. They want to convert Iraqi debt to them into equities in projects or gas shipments.

“Generally speaking the country is coming out of a very dark period and has that burst of optimism that you often get in Iraq,” Knights said. “And there’s going to be a lot of private-sector driven, population-driven, service-sector driven, investment opportunities.”

Iraq’s neighbors are also looking at the country’s electoral and sectarian politics. Most of the areas that need rebuilding, including Mosul, Iraq’s second-biggest city, are dominated by Sunnis. These were the places where ISIS put down deep roots. As Iraq’s Shia-dominated government tries to rebuild, it will want to ensure that these Sunni-majority areas receive a fair share of reconstruction funds. Ultimately, that might be the only recipe for a united Iraq.

Iraq’s Arab neighbors are wary of Iran’s influence in the country’s politics. It is far from certain that Haider al-Abadi, the Iraqi prime minister, will be remain prime minister after elections in May. Saudi Arabia especially is keen to see him return. The election results could determine if all the money that was pledged this week in Kuwait comes through; they could also determine if more funds are promised for the reconstruction of Iraq.

“The Saudis ... are hesitant to pledge big sums before the election,” Jiyad said. “If Abadi stays, you might see more money come in then.”

No matter what Iraq asked for, it’s unlikely the country would be able to spend $88 billion this year—or the next year, or indeed even in 2020. But in the coming years, depending on what the Iraqis do with the amounts that have been pledged in Kuwait, there will be other opportunities to raise money. “This is not a one and done,” Knights said. “This is part of an ongoing process of attracting not just aid donors but also investors to Iraq who expect to see a return.”