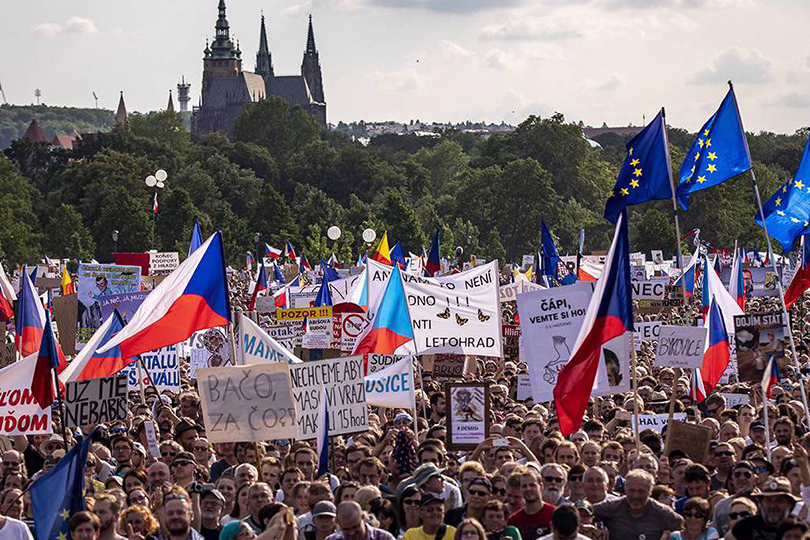 These days, liberal democracy and authoritarianism seem to be engaged in a process of competitive decay, the outcome of which remains uncertain.

These days, liberal democracy and authoritarianism seem to be engaged in a process of competitive decay, the outcome of which remains uncertain. But it is never wise to write democracy off, much less act in ways that hasten its downfall.

In the late 1970s and early 1980s, prominent international relations experts such as the late French political philosopher Pierre Hassner argued that the world was witnessing a process of competitive decay between the United States and the Soviet Union. For the latter, the conflict in Afghanistan was about to become an even costlier failure than the Vietnam war had been for America. By 1989, the verdict was clear: The Soviet Union had atrophied much faster than the US, and its empire collapsed, the victim of its own errors and contradictions.

Today, the concept of competitive decay of ideological and political models seems to be relevant once again. In a recent interview with the Financial Times, Russian President Vladimir Putin declared that the liberal democratic ideal had become “obsolete.” Yet the crowds of protesters demonstrating in the streets of Moscow and, much more spectacularly, Hong Kong, suggest that the authoritarian model has plenty of problems of its own.

True, worried democrats now fear that the world has entered a third, darker phase of its postwar history. The first phase, from 1945 until 1989, was dominated by the Cold War. The second, between 1990 and 2016, represented a fragile victory for liberal democratic regimes. But now, the argument goes, the world is in a new, dangerous populist era that began with the victory of the Brexiteers in the United Kingdom and the election of President Donald Trump in the US.

Yet this interpretation may reflect the current general mood of pessimism and resignation as much as objective reality. Populism itself is currently under attack in several Central European countries, including the Czech Republic, Slovakia, and Romania. And in France, President Emmanuel Macron is defending the classical liberal democratic model far more robustly than many of his critics had expected.

Reports of the demise of democracy and freedom, and the victory of populism and authoritarianism, are thus premature. If anything, the longing for freedom and democracy is on the rise. This suggests that reason has not yet been crushed by negative emotions.

Thus, the age-old question remains: which model – democracy or autocracy – is more vulnerable? The outcome is not predetermined, and will of course depend on political personalities, events, and cultures.

In that regard, the 2020 US presidential election could prove crucial. Moreover, uncertainty regarding the outcome is greater than it was before the past two elections. Rightly, few people thought that Barack Obama would lose in 2012. And, wrongly, few thought that Trump would win in 2016. The 2020 race, by contrast, looks wide open.

After getting it so wrong in 2016, most commentators, including me, are trying to be more cautious this time. Yet significant segments of the global financial and economic elite seem to think that unless the US falls into recession in the coming months, Trump will be re-elected. Moreover, their prognosis is not only based on a fear of being wrong again; many seem resigned to such a result, and some may even be hoping for it.

At this point, the comparison with the 1930s inevitably comes to mind. Of course, Trump and Adolf Hitler have little in common. But in their apparent acceptance of Trump’s re-election, large parts of the liberal establishment are behaving like Germany’s financial and industrial elites when Hitler rose to power in the 1930s. Back then, German bankers and bosses deluded themselves into thinking that they could control their country’s vulgar new chancellor. And they were convinced that, despite Hitler’s strange behavior and appearance, he remained the best defense against communism.

Sadly, many of today’s elites seem to have learned nothing from history, and think and act as if interests and values were totally disconnected from each other in the real world. So long as Trump is good for business, they appear unconcerned that he is the single biggest threat to America’s soul and values, and to its image and interests abroad. Sure, they say, Trump may be going a bit too far with the Chinese on trade, but at least he has been asking them the right questions. And yes, he may be overplaying the race card, but he is no racist himself, and, if flirting with the unacceptable helps to consolidate his hardcore support, then why not?

Such thinking is deeply dangerous. As the Franco-Lebanese writer Amin Maalouf has said, it is “better to err with hope, than to be right with despair.” Contrary to what many democratic Cassandras think, the worst is not inevitable. Authoritarians and populists have not yet triumphed, and in many places, democrats are fighting back.

Or, to put it less optimistically, democracy and autocracy still have similar chances of decaying. For now, it remains uncertain which model will prevail. But it is never wise to write off democracy, much less hasten its downfall.

* Dominique Moisi is a special adviser at the Institut Montaigne in Paris.

After the Liberal International Order