Is Greed Destroying Your Soul? 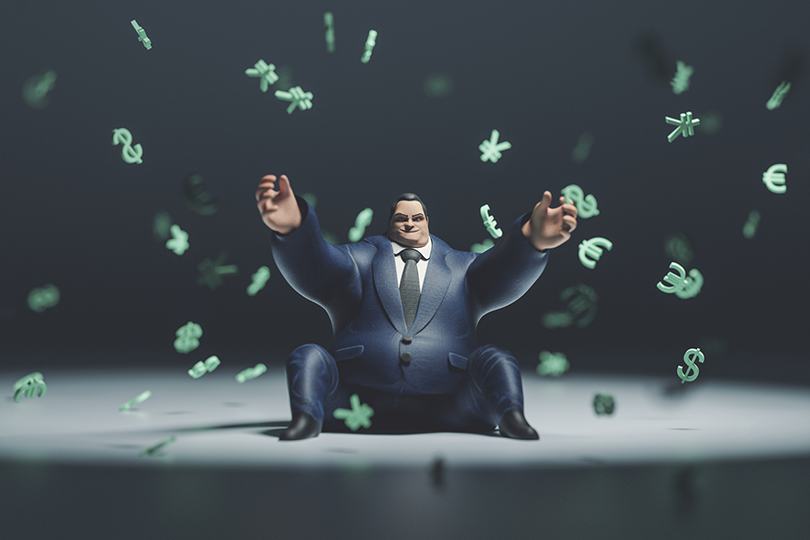 As Gordon Gekko famously said in Wall Street, “Greed, for the lack of a better word, is good. Greed is right, greed works. Greed clarifies, cuts through, and captures the essence of the evolutionary spirit.” Do you believe he had a point?

Defined as the obsessive pursuit and accumulation of wealth, greed is also known as one of the seven deadly sins. However, it may have a purpose, according to evolutionary psychologists. They believe that, by pushing us to amass status-signalling possessions, greed can help us attract a mate and thus perpetuate our genetic code.

I prefer to look at greed as a coping mechanism. In my interactions with greedy people, I have observed that many are trying to fill an inner void or solve another emotional problem. I remember one very wealthy executive, let’s call him Sid, who came to me for help. Sid was on the brink of divorce. His wife was fed-up with his self-centred pursuits. His grown-up children were not happy with him either, as he had never paid much attention to them. Sid admitted that chasing deals was the only thing that made him feel alive. He always felt the urge to earn more money.

When I asked Sid why money was so central to his life, he told me that he grew up watching his entrepreneurial father go through several bankruptcies. He remembered how embarrassed he was when his family would hide to avoid creditors. The neighbour’s children would also make fun of him and his family’s financial situation.

I told Sid that he should be pleased with his accomplishments. He was now independently wealthy and could do whatever he wanted. Sid said that he didn’t feel financially secure and gave many unconvincing reasons why he could not relax.

Wealth as a relief for emotional discomfort

Early negative experiences with parents appear to set the stage for feelings of low self-esteem. Many greedy people obsessively pursue wealth as a substitute for what they feel is lacking inside them. But they ignore the high price that comes with greediness – a stunted life.

Materialistic pursuits are often an attempt at relieving emotional discomfort. In fact, the behaviour of greedy people can be compared to that of substance abusers. But just like drugs, material possessions can never provide the comfort and reassurance we all crave. On the contrary, the greedier we become, the more we advance on the path of self-destruction. Unfortunately, amid our busyness, we rarely stop to ask ourselves: “Why am I frantically pursuing wealth?”

Ironically, greed is not so much of a financial issue. It is the symptom of a troubled mind trying to link self-worth to financial worth, usually on a subconscious level. But, like the proverbial leaking bucket that can’t be filled, the personal costs can be high. Far too often, greed comes with stress, exhaustion, anxiety, depression and despair. In addition, it can lead to maladaptive behaviour patterns such as gambling, hoarding, trickery and even theft. In the corporate world, as John Grant wrote, “fraud is the daughter of greed.”

Some believe that without a dose of greed, a given person, community or society may lack the motivation to move forward. In sum, greed spurs accomplishments. Others think that greed is simply Homo sapiens’ way of dealing with the existential anxieties of life. It could even be a means to transcend death, since our possessions persist after we pass on. In this light, isn’t greed nothing more than a fact of life? Shouldn’t we just embrace it?

True enough, many successful societies are driven by greed. It has been argued that political systems designed to eliminate greedy behaviour have invariably led to poverty, chaos and other disastrous results. I believe that, as with most things in life, managing greed is about balance. Like all potentially destructive human drives, greed must be tempered by positive social norms, such as generosity. If not, it is bound to trigger social unrest.

Thus, although greed may be important for economic progress, it is fair to say that lust for possessions may contribute to a society’s decline. Unchecked greed can destroy the soul of humanity like a great cancer, metastasising throughout society. Our tendency towards conspicuous consumption has already inflicted severe damage to the environment. The victory of greed over compassion may ultimately cause our civilisation's downfall.

Society’s ambivalence about greed makes it difficult to “treat” greedy people. After all, many view greed and its related traits – such as ambition and material success – as desirable rather than a potential mental health problem. It is not always easy to explain the harm caused by excessive greed. How can we explain that helping others is the real path to inner fulfilment? Or make greedy people understand that they can do something about their compulsion? There is still such a thing as free will. We all have a choice.

Returning to Sid’s case, I remember how hard it was to convince him that his obsessive pursuit of money was not rational. As he focused on accumulating more, he didn't even realise that he already had it all. More importantly, if money was his sole measure of success, he couldn’t be surprised if it turned out to be all that he would ever have.

If you can’t be content with what you have, you’re unlikely to be happy with more. At one point, I asked Sid to tell me the income level he believed he needed. After reflecting, he came to realise that there would never be such a thing as “enough”. It started to dawn on him just how illogical and destructive his behaviour was – for him and the people in his life.

Sid and I spent quite some time exploring his underlying issues and the associations between his anxiety and his greed-fuelled actions. Gradually, he came to understand that he was really craving self-acceptance and “rich”, satisfying relationships. He saw that he could break his psychological chains and that he did have choices.

One of the most difficult tasks for greedy people is learning to be selfish in a proper way. They need to pay attention to their inner self. As Sid’s case shows, this is not an easy process. It requires persistence, patience, humility, courage and commitment. But a long-term investment in the self can be a powerful antidote to greed and other forms of addiction. As the philosopher Vernon Howard said, “You have succeeded in life when all you really want is only what you really need.”

The COVID-19 Cash Out