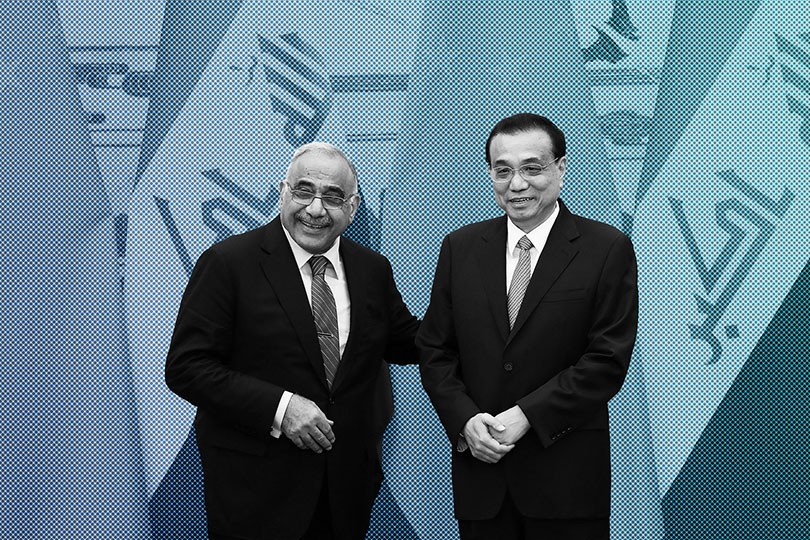 When Iraqi Prime Minister Adel Abdul Mahdi led a delegation to China in September, Baghdad and Beijing activated an "oil for reconstruction" and investment program. Under the arrangement, Chinese firms work in Iraq in exchange for 100,000 barrels per day.

Iraq has said it needs more than $88 billion to develop and mend its rickety infrastructure after three years of combating the Islamic State (IS).

Speaking to the press, Abdul Mahdi said that, including this new deal, about 20% of Iraq’s daily oil production is being exported to China.

"We agreed [with Beijing] to set up a joint investment fund, which the oil money will finance," he said, adding that Iraq requires that China not monopolize implementing projects inside Iraq but rather will work in cooperation with international firms.

Such an agreement isn't new. In 2015, when Abdul Mahdi served as oil minister under then-Prime Minister Haider al-Abadi, Iraq signed up for China's Belt and Road Initiative in a deal founded on the principle of oil in exchange for construction, investment and development. Back then, China was awarded 100 projects. Yet the agreement was halted due to the political and security tensions that resulted in a ministerial reshuffle.

Iraq has been rocked by demonstrations in recent weeks, and the prime minister has again called for Cabinet changes. The situation could affect the current deal as happened before, though nothing official had been announced.

Chinese investments in Iraq total $20 billion, mainly in the energy sector via a consortium with international firms or independently to develop power plants. Moreover, annual trade between the two countries exceeds $30 billion, with a total of $15 billion in Iraqi oil exports.

The current Iraqi government started turning its back on US companies following a $15 billion power deal with Germany’s Siemens to rehabilitate the infrastructure — leaving behind General Electric, which has operated in Iraq for years, and failing so far to sign a $53 billion deal with ExxonMobil to implement the "southern megaproject."

Iraq is in the process of approving a law regulating the work of a reconstruction council, which will be chaired by the prime minister and tasked with overseeing projects worth more than $210 million. This would imply that the ministries and provincial governments are kept away from such projects to combat corruption and make Chinese companies’ jobs easier.

Electricity Minister Louay al-Khateeb wrote Sept. 24 on his Facebook page, “China is our primary option as a strategic partner in the long run. We started with a $10 billion financial framework for a limited quantity of oil to finance some infrastructure projects.” He noted, “The Chinese funding tends to increase with the growing Iraqi oil production, to be used differently from the previous policies, through construction, investments and operationalization of the reconstruction council.”

Iraq has taken the first steps toward putting this deal into force by opening bank accounts, and a Chinese delegation will visit Iraq in the coming days to learn about strategic projects such as the suspension railway and Nasiriyah International Airport, and to reach an agreement regarding their implementation.

Speaking to Al-Monitor, Abdul Hussein al-Hanin, adviser to the prime minister, said, “The China-Iraq deal stretches over 20 years. Under the deal, Baghdad shall export to China 3 million barrels a month at the world price, currently estimated at $180 million.”

Hanin, who was part of the Iraqi delegation, went on to say, “Iraq is currently selling its oil and obtaining the money one or two months later. Under this deal, however, the money will be in the form of projects that the Chinese firm carries out inside [Iraq].” He added, "The projects were identified based on three priorities. First is building and modernizing the highways and internal roads with their sewage systems. Second is the construction of schools, hospitals, and residential and industrial cities, and third is the construction of railways, ports, airports and other projects.”

The Iraqi government signed the agreements with China unbeknownst to parliament.

Haybat al-Halbousi, head of the parliamentary Energy Committee, told Al-Monitor, "Parliament and the Energy Committee know nothing about the agreements signed with China. We will assume our monitoring role in hosting officials in the upcoming days to learn about the nature of these agreements.”

He noted, “There will be a firm parliamentary stance and parliament will pass the agreements if they serve Iraqi interests.” He denounced the government for ignoring parliament in such major deals.

The government could face a new problem, namely the oil-rich provinces rejecting the implementation of projects in non-oil-rich provinces. Subsequently, internal tensions could be ignited and hinder such projects, similarly to what happened with the petrodollar project that allows oil-producing provinces to obtain $5 per barrel produced.

Sabah Alwah, a former adviser to the Iraqi Ministry of Oil, told Al-Monitor that Iran pressured Iraq to go to China in an attempt to embarrass the United States, has issued trade sanctions against countries doing business with Iran and in a trade conflict with China. Hence, China could relinquish its projects in Iraq if Beijing and Washington improve their relations.

He underlined that it's a good move to use oil sales to develop infrastructure, rather than obtaining loans from foreign countries or granting foreign companies a share of the projects’ revenues. He said Iraq is still committed to OPEC's efforts to limit supply — yet Iraq reached record oil output in August of 4.88 million barrels per day.

Iraq has had booming oil revenues for years. Yet its budget has suffered from phantom projects and extortion, which pushed international firms away and prevented them from investing there. Now, Chinese companies could face the same fate.