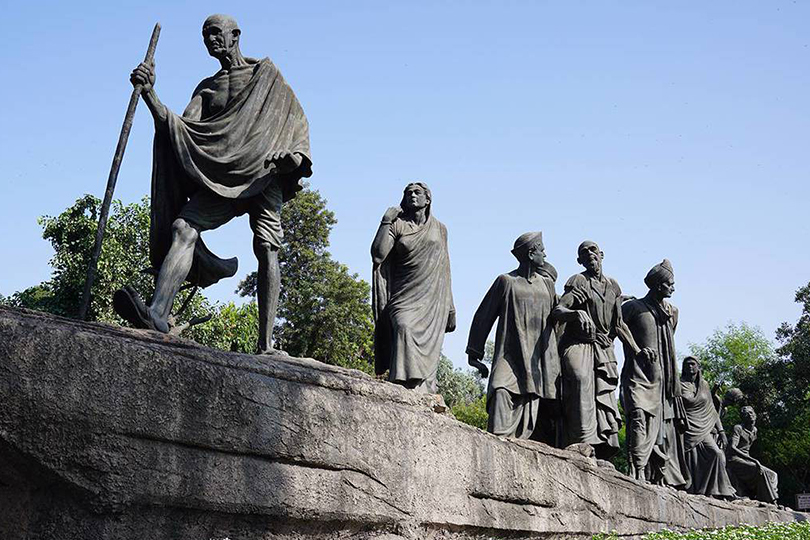 The Dandi March, which started 90 years ago, inaugurated Mahatma Gandhi’s most successful attempt at civil disobedience against the British Raj. Unfortunately, while the originality of Gandhi’s thought and the example of his life still inspire people around the world, one must wonder if we really have learned what he meant by truth.

March 12 marks the 90th anniversary of one of the most momentous events in India’s nationalist struggle: the start of the Dandi March, which inaugurated Mahatma Gandhi’s most successful attempt at civil disobedience against the British Raj. With India’s pluralism and democracy under greater threat today than at any time since independence, the lessons of the march have never been more relevant.

The Dandi March was rooted in a longstanding grievance. The British had turned salt production and distribution into a lucrative monopoly. Indians were prohibited from producing or selling salt independently, and were required to buy expensive, heavily taxed, and often imported salt. Indian protests against the salt tax had begun in the nineteenth century, but Gandhi’s decision in 1930 to demonstrate against it was a breakthrough moment.

Gandhi started marching from his ashram near Ahmedabad to the town of Dandi on the Arabian Sea, some 385 kilometers (239 miles) away. Along the way, his group stopped in villages, wherever larger crowds gathered to hear the Mahatma denounce the tax. Hundreds joined as the marchers made their way to the coast.

On April 5, they reached Dandi. The next morning, Gandhi and his followers picked up handfuls of salt along the shore, thus technically “producing” salt and breaking the law – a visually compelling and profoundly effective act of civil disobedience.

This dramatic event seized the imagination of India and the world. Gandhi continued his protest against the salt tax for the next two months, exhorting other Indians to break the salt laws. Thousands were arrested and imprisoned; the Mahatma was imprisoned in early May, after he informed Viceroy Lord Irwin of his intention to lead a march on the Dharasana saltworks.

News of Gandhi’s detention spurred tens of thousands more to join the march, which went ahead on May 21. Some 2,500 peaceful marchers were attacked and beaten by police. By the end of 1930, roughly 60,000 people had been jailed.

The Raj had seen nothing like it, and the imperial authorities realized that continued repression and detention were unsustainable. Gandhi was released from custody in January 1931 and began negotiations with Irwin. A truce was formalized in the Gandhi-Irwin Pact, signed on March 5, 1931. The calming of tensions paved the way for Gandhi, representing the Indian National Congress, to attend the second session of the Round Table Conference in London. His civil disobedience campaign had succeeded; moral victory was his.

The Indian National Congress, now in opposition, is recalling this moment by partly re-enacting the Dandi March. In doing so, the party is echoing Jawaharlal Nehru, India’s first prime minister, who, at the moment of independence, spoke of the Mahatma as “embodying the old spirit of India” whose message would be remembered by “succeeding generations.

What was that message? The Mahatma led the world’s first successful nonviolent movement for independence from colonial rule. At the same time, he was a philosopher who constantly sought to live out his ideas, whether they applied to individual self-improvement or social change: revealingly, his autobiography was titled The Story of My Experiments with Truth.

No dictionary imbues “truth” with the depth of meaning Gandhi gave it. His truth emerged from his convictions: it meant not only what was accurate, but what was just and therefore right. Truth could not be obtained by “untruthful” or unjust means, which included inflicting violence upon one’s opponent.

To describe his method, Gandhi coined the expression satyagraha – literally, “holding on to truth,” or, as he variously described it, truth force, love force, or soul force. He disliked the English term “passive resistance,” because satyagraha required activism, not passivity. If you believed in truth and cared enough to obtain it, Gandhi felt, you could not afford to be passive: you had to be prepared to suffer for truth.

So, nonviolence, like non-cooperation and non-alignment, meant much more than the denial of an opposite. It did not merely imply the absence of violence. One vindicated the truth by inflicting suffering on one’s self rather than on one’s opponent. Accepting punishment was essential to demonstrate the strength of one's convictions.

This was the approach Gandhi brought to India’s independence movement – and, unlike sporadic terrorism and moderate constitutionalism, it worked. Gandhi took the issue of freedom to the masses as one of simple right and wrong and gave them a technique to which the British had no response.

By renouncing violence, Gandhi wrested the moral advantage. By breaking the law nonviolently, he highlighted the injustice of the law. By accepting the punishments imposed on him, he forced his captors to confront their own brutal behavior. By voluntarily subjecting himself to hunger strikes, he demonstrated the lengths to which he was prepared to go in defense of what he considered to be right. In the end, he made the perpetuation of British rule impossible.

Dandi and Gandhi offer today’s India more than historical resonance. But one fact must be acknowledged: Gandhian nonviolent civil disobedience works only against opponents vulnerable to a loss of moral authority – a government responsive to domestic and international public opinion and capable of being shamed into conceding defeat. It has little effect on those who are not interested in whether they are wrong. For them, your willingness to undergo punishment to prove them wrong is the most convenient means of victory. Gandhism without moral authority is like Marxism without a proletariat.

Yet few who have tried his methods have had his personal integrity or moral stature. While the world was spiraling into fascism, violence, and war, the Mahatma taught the virtues of truth, nonviolence, and peace. He destroyed colonialism’s credibility by opposing principle to force. And he set and attained personal standards of conviction and courage that few will ever match. He was that rare leader who was not limited by the inadequacies of his followers.

The originality of Gandhi’s thought and the example of his life still inspire people around the world. Unfortunately, it is a world in which one must wonder if we really have learned what he meant by truth – and how to identify and defend it.

On the Murder of Husham al-Hashemi