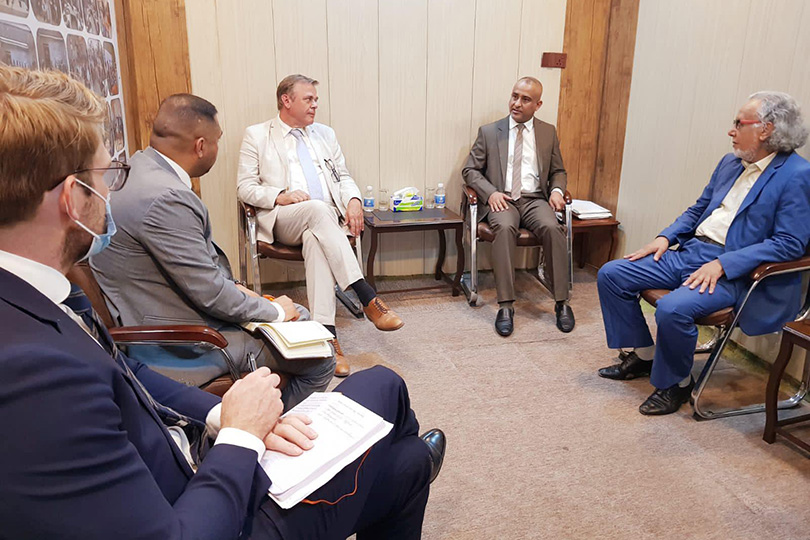 The director of Annabaa Forum for Dialogue, Ali AlTalaqani, and the dutch Ambassador, Michel Rentenaar, discussed a number of political, economic and cultural issues, along with the upcoming parliamentary elections.

The forum stated to Annabaa News Agency: AlTalaqani received the Ambassador of the Kingdom of Netherlands in Iraq, Michel Rentenaar, along with his delegation in the Forum’s center In Karbala.

The statement added: both parties, each presented by a team of writers, researchers and intellectuals, discussed the chance of a future cooperation in different scientific and cultural fields. The mutual target of this collaboration is to achieve prosperity and development for the Iraqi society, not to mention acquiring a substantial intellectual renaissance and discovering a new development vision for the country. The parties also discussed the effective factors on the electoral process and democracy.

The statement clarified: it is fundamental for each Iraqi active party to support the process of elections away from votes’ manipulation and fraud. This can only be obtained by vast electoral participation, public monitoring and supporting the youth in building their political and cultural potentials and experiences in accordance with presenting serious programs that secure a bright future with young leadership.

Both parties have agreed upon securing a space of dialogue among political and cultural elite, decision makers and the public in order to reach satisfactory results that may boost the Iraqi reality. They also stressed on the importance of building educational institutions and scientific exchange beside sending students abroad. They also asserted on finding common ground and effective partnership among cultural and scientific institutions.

Regarding the economic aspect, both parties emphasized on the collaboration in fields of agriculture and energy, and to neutralize Iraq’s economy distancing it from foreign dependency; most importantly, is to support the successful expertise in these simple communities as to concentrate on investing these experiences properly.

From his part, Mr. Rentenaar praised what the forum presents of dialogue programs as different perspectives are gently expressed to come out with convenient vision to achieve what the Iraq society aspires for. The ambassador expressed his admiration to see more of such activities.