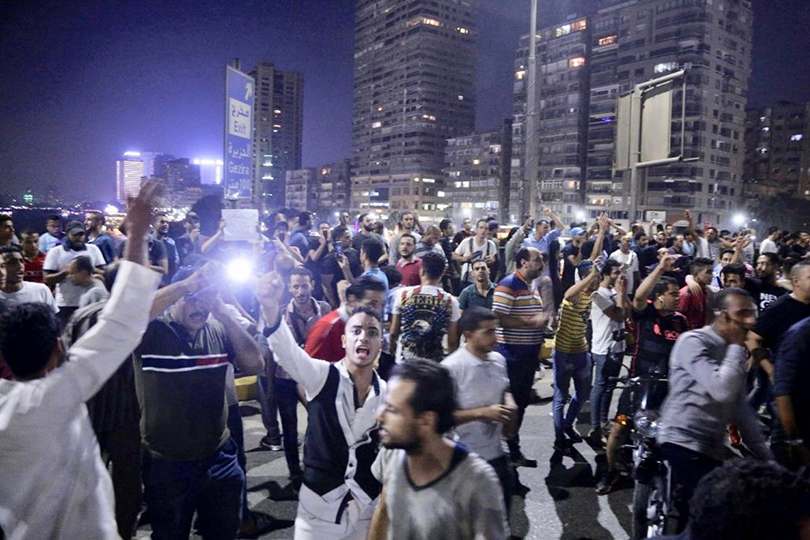 Crowds gathered in Cairo's Tahrir Square, the site of the 2011 uprising that toppled longtime autocrat Hosni Mubarak, as well as other cities around Egypt on Friday night and early on Saturday, calling for an end to Sisi's rule.

Video footage posted online showed security forces in cities across Egypt rounding up protesters and taking them into custody.

The Egyptian Centre for Economic and Social Rights, a local rights group, said on Saturday that more than 60 protesters were arrested on Friday night, with the numbers increasing.

Facebook posts from the centre listed names of individuals arrested and said that the majority of arrests took place in Cairo and around Tahrir square.

Protesters also faced a wave of violence, according to a Middle East Eye correspondent in Cairo.

"No deaths, but I saw about 20 to 25 people arrested and held in police trucks. Some were released later. Currently downtown is full of riot police and plain-clothes policemen," said the correspondent, who remained anonymous because of restrictions on journalists in the country.

Protesters had taken to side streets, gathering in small groups chanting "leave" and "down down with Sisi Mubarak".

"The authorities should recognise that the world is watching and take all necessary steps to avoid a repetition of past atrocities," said Michael Page, deputy Middle East and North Africa director at Human Rights Watch.

The protests began in the virtual space, as anti-Sisi hashtags had been trending for weeks on social media amid increasing frustration with economic conditions and lack of freedoms in the North African country.

By early Saturday in Egypt, the hashtag #ميدان_التحرير (#Tahrir Square) was among most popular trends worldwide on Twitter.

Footage showing anti-Sisi demonstrations in other cities, including Alexandria, Suez, Gharbiya and Mahala, Mansoura and Damietta, continued to surface online into the early hours of Saturday.

His latest video called on the country's defence minister, Mohamed Zaki, to arrest Sisi after hundreds took to the streets on Friday night.

"We must all stand together and forget any [disagreements] between us. He must be punished."

Ali told Zaki that the army is tasked with the protection of the Egyptian people, not an individual, no matter how important he is - referring to Sisi.

The 43-year-old Egyptian whistleblower has released more than a dozen videos from self-exile in Spain, alleging that officials misappropriated millions in public funds for their personal projects.

Ali said that, over the past 15 years, as the owner of a property company that contracted with the Egyptian military on major construction projects, he has had a front-row seat for all of it, and he's speaking out now because he hasn't been paid.

It was Ali who called for the protest on Friday after a football super cup match between Al Ahly and Zamalek.

Last Saturday, Sisi dismissed the claims and described them as "lies and slander".

Having been first elected in 2014 with 97 percent of the vote, and re-elected four years later, where the only other candidate was a Sisi supporter, Sisi has seen his popularity dwindle as the country underwent economic austerity measures. His supporters, however, claim that dissent must be squashed to ensure Egypt's stability in the wake of the 2011 uprising.