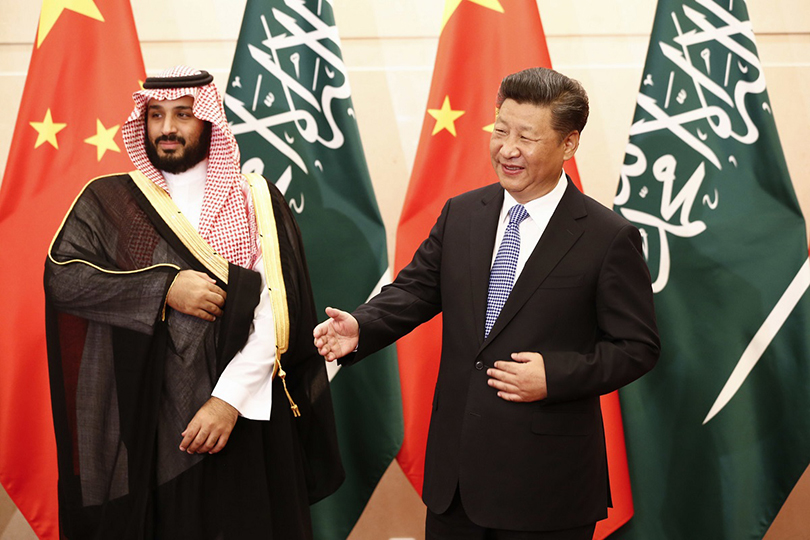 Tuesday’s horrific blast in Beirut was too small to be an atomic bomb, but the prospect of a Middle East devastated by a nuclear exchange still should go up several notches because of news in the Wall Street Journal that Saudi Arabia, with Chinese help, has built a plant to process uranium ore. Although the story made the front page, the Journal may have underplayed its significance.

The plant, near the remote town of AlUla, is in the northwest of the kingdom, about midway between the holy city of Medina and Tabuk, the side furthest from Iran. Apparently U.S. officials have known of the plant’s existence for months, perhaps years, and appear to have leaked or briefed their concerns to the Journal’s reporters. The role of the plant is to produce “yellowcake,” a semi-processed form of uranium, itself the crucial ingredient for both nuclear power reactors and atomic bombs.

The name comes from its color when it was first made decades ago. These days, yellowcake still may have the consistency of cake but is black or brown. It is an oxide of uranium — U3O8 — but its significance is that it is a necessary intermediate step to making uranium hexafluoride, the gas that can feed an enrichment plant. Depending on the layout of the centrifuges and the time spun, the resulting enriched uranium is either good for a power plant or a nuclear weapon.

Until Journal reporters asked the Saudis for comment, Riyadh had not acknowledged the existence of the plant. In terms of international protocols, that’s sort of OK — but it suggests a lack of openness inconsistent with peaceful intent. China wasn’t a comforting choice as a partner in this respect, either. Beijing can provide the necessary expertise, but its previous experience with such facilities has included Iran and Pakistan.

More to the point, processing uranium is linear. It goes from mining to processing (yellowcake), to conversion into dioxide and metal, to gasification (hexafluoride), to enrichment. Saudi Arabia has now ticked the first two boxes. Worse, from a proliferation perspective, it is not a step process in which one skill is mastered before starting on the next. The chances are that — in other remote parts of the kingdom, or hidden in plain sight — there are, in various states of completion, a conversion plant, a gasification plant, and an enrichment plant or two.

The kingdom has not been good at putting Washington at ease. In 2018, while visiting the U.S., Crown Prince Mohammad bin Salman, or MbS, told 60 Minutes: “Saudi Arabia does not want to acquire any nuclear bomb, but without a doubt, if Iran developed a nuclear bomb, we will follow suit as soon as possible.” Especially after the recent hospitalization of his father, King Salman, the 34-year-old MbS is the de facto leader of his country. American officials, particularly those wanting to back the prospective sale of U.S. civil nuclear technology for proposed Saudi power plants, previously have tried to minimize MbS’s words as not being a definitive statement of policy. Unfortunately, they do appear to be a valid statement of intent.

Justifying Saudi behavior in terms of Iran’s assumed continuing determination to have the capability to make nuclear weapons is an explanation, but it does not help U.S. policy. For example, a different path appears to have been taken by Riyadh’s close ally, the United Arab Emirates, which has forsworn enrichment and is just starting up the first of four South Korean nuclear power reactors.

An additional concern is that Saudi Arabia continues to have an arsenal of Chinese long-range missiles. They reportedly have been updated since the 1980s when, to the consternation of the U.S. and Israel, the type supplied was capable of carrying a nuclear warhead. Anxieties were further tweaked last year, when China was discovered to be building a nuclear missile factory in the Saudi desert. The layout of that plant was virtually identical to one constructed in Pakistan in the 1990s.

The ultimate historical twist is that when Pakistan was racing toward a nuclear weapon capability in the early 1980s, its uranium conversion plant wasn’t working properly. The bottleneck was temporarily overcome in May 1981 by China gifting enough highly-enriched uranium to make two atomic bombs (as well as the designs to construct the device). It was months before Western intelligence realized what had happened.

Once again, now in Saudi Arabia, it would appear that time is of the essence.