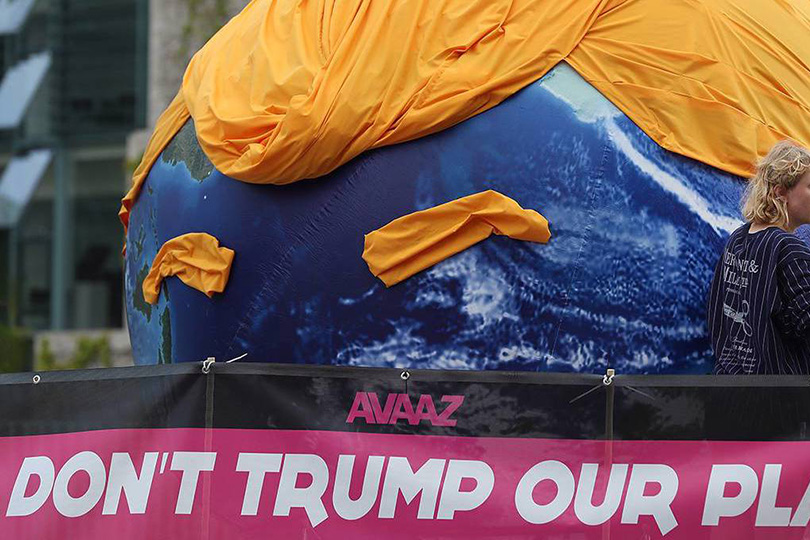 The COVID-19 crisis is rich in lessons, especially for the United States. One takeaway is that viruses do not carry passports; in fact, they don’t observe national borders – or nationalist rhetoric – at all.

For 40 years, Republicans have been insisting that “government is not the solution to our problem, government is the problem.” But now that COVID-19, climate change, and other collective threats are bearing down on the US and the rest of the world, the bankruptcy of this nostrum has been laid bare.

As an educator, I’m always looking for “teachable moments” – current events that illustrate and reinforce the principles on which I’ve been lecturing. And there is nothing like a pandemic to focus attention on what really matters.

The COVID-19 crisis is rich in lessons, especially for the United States. One takeaway is that viruses do not carry passports; in fact, they don’t observe national borders – or nationalist rhetoric – at all. In our closely integrated world, a contagious disease originating in one country can and will go global.

The spread of diseases is one negative side effect of globalization. Whenever such cross-border crises emerge, they demand a global, cooperative response, as in the case of climate change. Like viruses, greenhouse-gas emissions are wreaking havoc and imposing massive costs on countries around the world through the damage caused by global warming and the associated extreme weather events.

No US presidential administration has done more to undermine global cooperation and the role of government than that of Donald Trump. And yet, when we face a crisis like an epidemic or a hurricane, we turn to government, because we know that such events demand collective action. We cannot go it alone, nor can we rely on the private sector. All too often, profit-maximizing firms will see crises as opportunities for price gouging, as is already evident in the rising prices of face masks.

Unfortunately, since US President Ronald Reagan’s administration, the mantra in the US has been that “government is not the solution to our problem, government is the problem.” Taking that nostrum seriously is a dead-end road, but Trump has traveled further down it than any other US political leader in memory.

At the center of the US response to the COVID-19 crisis is one of the country’s most venerable scientific institutions, the Centers for Disease Control and Prevention, which has traditionally been staffed with committed, knowledgeable, highly trained professionals. To Trump, the ultimate know-nothing politician, such experts pose a serious problem, because they will contradict him whenever he tries to make up facts to serve his own interests.

Faith may help us cope with the deaths caused by an epidemic, but it is no substitute for medical and scientific knowledge. Willpower and prayers were useless in containing the Black Death in the Middle Ages. Fortunately, humanity has made remarkable scientific advances since then. When the COVID-19 strain appeared, scientists were quickly able to analyze it, test for it, trace its mutations, and begin work on a vaccine. While there is still much more to learn about the new coronavirus and its effects on humans, without science, we would be completely at its mercy, and panic would have already ensued.

Scientific research requires resources. But most of the biggest scientific advances in recent years have cost peanuts compared to the largesse bestowed on our richest corporations by Trump and congressional Republicans’ 2017 tax cuts. Indeed, our investments in science also pale in comparison to the latest epidemic’s likely costs to the economy, not to mention lost stock-market value.

Nonetheless, as Linda Bilmes of the Harvard Kennedy School points out, the Trump administration has proposed cuts to the CDC’s funding year after year (10% in 2018, 19% in 2019). At the start of this year, Trump, demonstrating the worst timing imaginable, called for a 20% cut in spending on programs to fight emerging infectious and zoonotic diseases (that is, pathogens like coronaviruses, which originate in animals and jump to humans). And in 2018, he eliminated the National Security Council’s global health security and biodefense directorate.

Not surprisingly, the administration has proved ill-equipped to deal with the outbreak. Though COVID-19 reached epidemic proportions weeks ago, the US has suffered from insufficient testing capacity (even compared to a much poorer country like South Korea) and inadequate procedures and protocols for handling potentially exposed travelers returning from abroad.

This subpar response should serve as yet another reminder that an ounce of prevention is worth a pound of cure. But Trump’s all-purpose panacea for any economic threat is simply to demand more monetary-policy easing and tax cuts (typically for the rich), as if cutting interest rates is all that is needed to generate another stock-market boom.

This quack treatment is even less likely to work now than it did in 2017, when the tax cuts created a short-term economic sugar high that had already faded as we entered 2020. With many US firms facing supply-chain disruptions, it is hard to imagine that they would suddenly decide to undertake major investments just because interest rates were cut by 50 basis points (assuming commercial banks even pass on the cuts in the first place).

Worse, the epidemic’s full costs to the US may be yet to come, particularly if the virus isn’t contained. In the absence of paid sick leave, many infected workers already struggling to make ends meet will show up to work anyway. And in the absence of adequate health insurance, they will be reluctant to seek tests and treatment, lest they be hit with massive medical bills. The number of vulnerable Americans should not be underestimated. Under Trump, morbidity and mortality rates are rising, and some 37 million people regularly confront hunger.

All these risks will grow if panic ensues. Preventing that requires trust, particularly in those tasked with informing the public and responding to the crisis. But Trump and the Republican Party have been sowing distrust toward government, science, and the media for years, while giving free rein to profit-hungry social-media giants like Facebook, which knowingly allows its platform to be used to spread disinformation. The perverse irony is that the Trump administration’s ham-handed response will undermine trust in government even further.

The US should have started preparing for the risks of pandemics and climate change years ago. Only governance based on sound science can protect us from such crises. Now that both threats are bearing down on us, one hopes that there are still enough dedicated bureaucrats and scientists left in the government to protect us from Trump and his incompetent cronies.