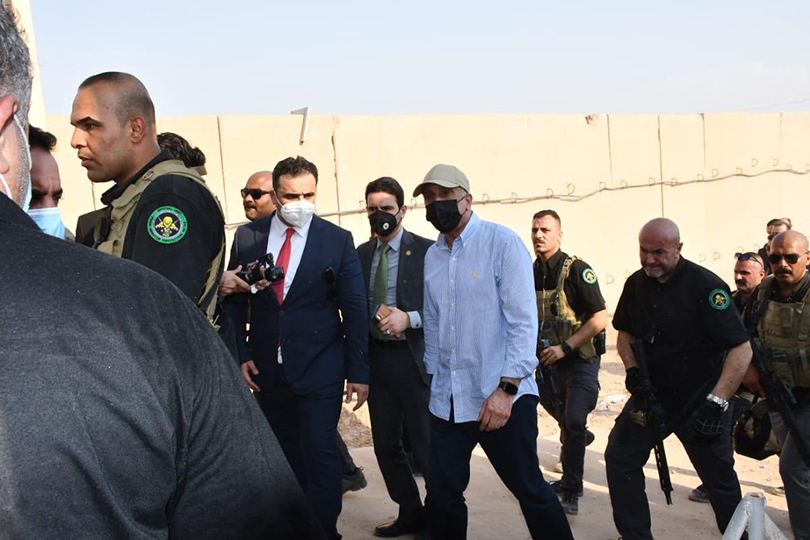 On September 14, Baghdad announced a range of strategic leadership appointments for institutions tasked with overseeing Iraq’s economy, borders, and anti-corruption efforts—a list that includes banks, customs authorities, airports, seaports, land crossings, municipal bodies, investigative committees, and more. The ambitious scope of the appointments and the centralized manner in which they were made says a great deal about Prime Minister Mustafa al-Kadhimi’s commitment to changing the corrosive status quo in Baghdad. The question now is whether his government can withstand the coming pushback from militia and political elements who benefit from that status quo. The following is a digest of the new technocratic appointments and their implications; see Part 1 of this PolicyWatch for a discussion of Kadhimi’s recent military reshuffling.

One of the main drivers behind Iraq’s long-building surge in militia influence and corruption has been the hijacking of strategic economic systems by political blocs that guide the selection and decisions of important officials. The leadership changes instituted since Kadhimi came to power in May are intended to free up many of those systems and reduce opportunities for negative actors to exploit them. The formal purpose of the September 14 appointments was to replace incumbents whose terms expired in July, but crucially, the choices were not guided by the typical quota used to split posts between parties.

• Central Bank of Iraq (CBI). Mustafa Ghaleb has been named the CBI’s new governor after long service as its head of legal affairs. A nonpartisan figure with a history of resisting political pressure, he will now take the lead on implementing bank reforms and protecting the dollar auction process against interference from Iran, militias, and other corrupt actors.

• Trade Bank of Iraq (TBI). Salem al-Chalabi, previously an advisor to the prime minister, is the new head of the TBI. This places a known international financial and legal figure at the heart of an agency that holds a virtual monopoly on Iraq’s multi-billion-dollar market for issuing letters of credit.

• Baghdad municipality. Manhal al-Haboubi is the new mayor of inner Baghdad, placing him atop the municipal organ known as the Amanat. Kadhimi previously planned to assume this role himself, but it will now be in the hands of a world-renowned architect and independent civil engineer—and therefore out of the hands of political parties who would have used it to feed patronage and corruption networks ahead of the next national elections.

• Committee on Integrity. Judge Alaa Jawad Hamid originally headed the committee until 2014 and has now been named to oversee it again. As the next section explains, however, it may not be the locus of real anti-corruption action going forward.

• Deputy ministers. New deputies were appointed at key economic ministries including oil, transport, electricity, agriculture, and labor (two deputies). The focus was on elevating technocrats from within each ministry.

• Supreme Technical Committee for Information and Communications Security (STC-ICS). Kadhimi revived this body on June 23 after it had been out of commission for five years. Militia leaders and allied politicians colluded to deactivate it in 2015, paving the way for a Lebanese Hezbollah-controlled company to take the lead in providing national network security in Iraq.

On August 27, a new Deterring Corruption Committee was established under retired general Ahmed Taha Hashim (aka Abu Ragheef), a legendary (if controversial) disciplinarian who headed internal affairs at the Interior Ministry during a brutal period of factional infighting in 2004-2005. Consisting of in-house judges and representatives from the Iraqi National Intelligence Service (which Kadhimi still formally heads), National Security Service (NSS), and Counter Terrorism Service (CTS), it has the authority to seize evidence and make arrests. The first such arrest was made in Baghdad on September 15: Ahmed al-Saidi, former director of the national pension fund.

Going forward, this cell is likely to focus on strategic cases of national importance at the prime minister’s direction. In determining its capability to undertake high-impact investigations of the kind called for by Grand Ayatollah Ali al-Sistani on September 13, Kadhimi will likely draw on support from other sources of legitimacy—including Sistani himself as well as President Barham Salih, Iraqi protestors, civil society, and international organizations.

The Kadhimi team has quietly moved to strengthen government control over important sources of revenue, thereby securing funds for the cash-strapped government while denying them to militias.

• Iraqi Civil Aviation Authority (ICAO). On June 25, well-known civilian pilot Nael Saad Abdul Hadi was appointed as the new ICAO head, allowing the former director to retire in safety after militias had warned him not to resign of his own accord. The new leadership then began the process of barring companies controlled by the Iran-backed militia Kataib Hezbollah from bidding for ground services and providing security at airports.

• Umm Qasr port. On July 16, all four directors of the port’s northern, central, southern, and Basra customs centers were sacked along with their deputies. After appointing replacements, the government posted army forces to protect the port and the new directors, with units rotating every two weeks to reduce the risk that corruption will set in again.

• Land crossings. In July, the government deployed new monitoring forces to some of the country’s most militia-dominated border crossings—Mutheriyah (on the Diyala-Iran highway), al-Qaim (on the Anbar-Syria border), and Shalamcheh (on the Basra-Iran trade route). At the latter crossing, physical fortifications were established to better channel vehicle movements through customs, a good first step toward tightening the borders.

• Digitization of border revenues. A long-delayed contract to digitize customs collection is being expedited through Iraq’s still-tortuous procurement process.

The Kadhimi government has tried something ambitious and risky with its economic reshuffle: centralizing the selection of candidates for strategic roles without significant input from the political blocs. This breaks a golden rule of Iraqi politics, namely, observance of the muhasasa, the longstanding system of party and ethnic patronage. Accordingly, the latest appointments will require Kadhimi to deal with harsh pushback from an enraged political class, especially the Iran-backed Fatah coalition.

In public, Washington should quietly acknowledge and welcome such appointments. Behind the scenes, however, U.S. officials and other international partners can confidently celebrate them as a sign that Kadhimi’s team is on the right trajectory and is willing to take (some) major risks.

In addition, Washington should urgently cultivate vocal Iraqi support for the appointments by quietly engaging key politicians and factions—most of all parliamentary speaker Mohammed al-Halbousi, who often leans toward the Iran-backed bloc at such moments and could guide the legislature toward approving the new officials. Washington should also engage the Kurdish parties, Ammar al-Hakim’s Iraqiyun coalition, and prominent figures like Ayad Allawi and Haider al-Abadi. Absent U.S. encouragement, these actors may be tempted to criticize the reshuffle for their own parochial interests, especially if they suspect that some of the technocratic appointments serve hidden party agendas. In the past four months, practically all parties have accused other factions of secretly guiding such appointments, even though many technocrats were chosen as the least politicized options available to Kadhimi.

Whatever new accusations may emerge, the United States should not be drawn into the nitty-gritty of Iraqi infighting. Instead, it should stand firmly behind Kadhimi’s technocratic appointments and welcome them as an important step forward. Fatah and other Iranian-influenced elements will no doubt accelerate their efforts to unseat the current government, so Washington should signal clearly to Halbousi, Kurdish leaders, and moderate politicians that they should not reinforce this divisive campaign.