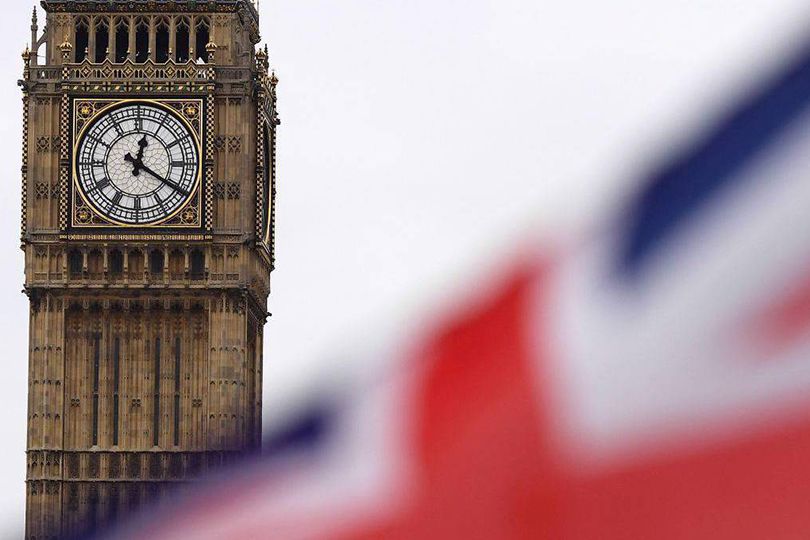 Brits, according to many outsiders, are reserved, repressed, resilient, unemotional and self-controlled. But how did the stiff upper lip become so closely associated with Britain?

The street cleaner was sitting at a small table outside Leadenhall Market in central London, his gaze fixed on a large mug of tea in front of him. I’d met the 60-something-year-old man a few weeks earlier on a previous visit to the market.

“Back again?” he asked, not looking at me as I took a seat at the next table. “Yes, just for a quick visit,” I replied. For a few moments, we sat in silence staring at the 19th-Century market.

“Did you see Boris’ speech last night?” he eventually murmured. I nodded.

“Bloody Covid,” he said, in a way one might complain about noisy children. He gave a slight shake of the head – more in mild irritation that anything else – before draining his tea and standing up. “Oh well, better crack on.” With a brief nod in my direction, he disappeared through the grand archway and into the covered Victorian-era market.

It was a very British interaction. Understated, good humoured, light on the emotions; this was British stoicism at its best.

We all lug stereotypes around, our perennial ball and chain. We British, according to many outsiders, are reserved, repressed, resilient, unemotional and self-controlled. Categorised by our “stiff upper lip” – the famous but now out-of-fashion form of extreme British stoicism – we are often pigeonholed as stunted stoics. E M Forster famously bemoaned his fellow countrymen as having “well-developed bodies, fairly developed minds and undeveloped hearts”.

But how true is all of this today?

Stoicism, which has its roots in Ancient Greece, originated as a philosophy of understanding pain and hardship and being able to deal with them without complaint. And it’s certainly true that there is a charming stoicism about the British, from the well-worn British mantra “keep calm and carry on” to the vehement belief that a cup of tea is the only appropriate response to a crisis.

Visitors to the UK will notice that our lexicon comes with a wonderfully wide variety of phrases that encourage or urge on in the face of adversity. “Muddle through”, “plug away”, “chin up”, “soldier on”, to name just a few. Facing adversity with one’s head held high is an intoxicating image for British people. We gravitate towards this kind of stoicism, but are we really a bastion of emotional self-control as many believe?

A Gallup survey from 2012, which ranked the daily emotional response of any kind, showed Britain, the reputed bastion of emotional control, in the top half of emotional response – placed directly between Sweden and Greece. Ninety-three of the 151 countries polled reported showing fewer emotions daily than the British. On a statistical basis, at least, it would appear that we are far more emotional than many assume. But to better understand who we are now, we need to begin much further back.

Four hundred years ago, the British persona was very different from the generally accepted stereotype we see today. In his book, Weeping Britannia: Portrait of a Nation in Tears, Thomas Dixon described the British around the time of Shakespeare as being known for “sweatiness, drunkenness, meat-eating, anger, violence, simple-mindedness and melancholia”.

During this era, Thomas Wright, in his 1604 book Passions of the Minde in Generall, described how those in hotter climates, like the Spaniards and Italians, had learned to conceal their emotions, whereas the simpler Brits wore their hearts on their sleeves – a statement that seems entirely reversed to the 21st-Century mind.

The French Revolution of 1789 was one of the early catalysts for change in British emotional self-control. While many in Britain admired the virtues of liberty and human rights that emerged from the uprising, there was a sense that the French had lost control – they had let their emotions get the better of them.

“It was a moment that views coalesced around. The revolution had looked like a great triumph of humanist Republican politics, but quickly turned very nasty and very violent,” Dixon told me. “It reinforced this idea that passions were dangerous, mad and should be resisted.”

Within four years, the two nations were at war as France took on the remaining powerful European monarchies during the Revolutionary Wars. While the stiff-upper-lip concept in its most extreme form was still some way off, it was here that British sensibilities began to tighten. The radical social revolution that had overtaken France threatened the status quo, and this “madness” had to be matched with restraint.

A quarter-century of conflict ensued between England and France, culminating in Napoleon’s banishment to St Helena in 1815. With their main rival out of the way, the stage was set for the rapid expansion of the British Empire, coupled with an increasingly stringent doctrine of superiority and emotional resolve. This famed British self-discipline brought vast conquest and riches that transformed the nation, but with it came exploitation and barbaric acts.

Between 1815 and 1914, approximately 400 million people and roughly 10 million sq miles of territory joined the British Empire, and with it, a carefully manufactured cultural identity began to emerge. “The stiff upper lip was historically an upper class, public school, university and then military concept,” said Dixon, “a brutal, spartan way of not showing your feelings and ruling the world on the basis of your superior self-control – which veered over into oppression and cruelty.”

Charles Darwin wrote in his 1872 book, The Expression of the Emotions in Man and Animals, “savages weep copiously from very slight causes” while “Englishmen rarely cry, except under the pressure of the acutest grief.”

Books, poems and plays during this period amplified this exaggerated stoicism, and some of Britain’s best-loved work from the 19th Century positively drips with it. Rudyard Kipling’s If, Alfred Tennyson’s The Charge of the Light Brigade, and William Ernest Henley’s Invictus all speak of resilience and determination in the face of great hardship.

While such stoic attitudes were commonly associated with upper-class males, it became much more widespread.

“There are working-class versions of the stiff upper lip, but they are culturally different. The figure of the uncomplaining working-class mother has always been there, a ferocious stiff-upper-lipped individual,” said Dixon. A statement by the National Union of Women’s Suffrage Societies in 1914 declared “the modern woman must drive back the tears; she has work to do.”

British stoicism reached its zenith during the first half of the 20th Century. The country emerged victorious from both World Wars but was appallingly scarred – both socially and economically.

“After World War Two, the country had to come to terms with the fact it had won, and yet had lost so much,” said Dr Catherine Ellis, history professor at Ryerson University in Ontario, Canada. “Allied to that was the loss of empire and thus holding on to whatever was left – and what was left had to be the things that were superior about the British people.”

The Blitz, in which cities across the nation were bombed between 1940 and 1941, is a revered time for the British people and an excellent example of this idea of stoic superiority. As hellish as the destruction was, the prevailing image was that Britain stood strong, and valiantly beat away the enemy. But it was far less rosy than our history lessons led us to believe. During World War Two, crime rose by 57%, as looting, ration card theft and black-market profiteering all increased substantially. Even cases of murder increased by 22%. We easily recall the acts of bravado and heroism; much less the darker side.

“Fear and grief were certainly present, but those emotions didn’t fit the national narrative of strength and bravery, and of plucky Britons ‘standing alone’ against fascism,” said Ellis. It was a narrative that the government, and indeed most of the population, was eager to fulfil, but this carefully manufactured national identity stood on shaky ground.

The immediate decades after the war saw considerable changes that began to reshape Britain. By 1965, the number of those under colonial rule outside of Britain had dropped to just five million, and the country’s mantle as a global superpower vanished. To replenish its lost labour, the British Nationality Act of 1948 granted Commonwealth citizens the right to live and work in the UK, and hundreds of thousands of people arrived from across the world. A new, multicultural Britain was beginning to take shape, and with it began the slow steady disentanglement of British emotions.

“There was a definite cultural shift around the 1960s,” said Dixon. Slowly the stiff upper lip attitude fell out of favour and Britain became an increasingly emotional place, from the hedonistic joy of the swinging ’60s to the rage seen on the picket lines during the 1980s, to the despair after the Hillsborough disaster in 1989 – and perhaps best exemplified in the national upheaval and displays of public emotion after the death of Princess Diana in 1997.

In fact, a year on from Diana’s death, British journalist Andrew Marr said that, “Britain suddenly stared at itself in the mirror and didn’t quite recognise the face looking back. No longer was the expression tight-lipped, white and drawn with reticence. Diana was the Queen of another country: a multicultural, liberal and emotionally open Britain”.

It might seem, then, that we’ve come full circle, throwing off our emotional shackles with glee. But to say Britain is no longer repressed is way off the mark. We are unquestionably moving towards better-expressed emotions, but the shadow and burden of 150 years, when we conquered the world and then lost it all, still looms.

On 5 April this year, the Queen addressed the nation and reminded us “that the attributes of self-discipline, of quiet good-humoured resolve and of fellow-feeling still characterise this country.” We were once again asked to hail our “blitz” spirit for the good of the nation. But, I wondered, how far can stoicism really go in modern Britain with our modern dilemmas?

As I left Leadenhall Market, I noticed two men and a woman outside a small flower shop, one of the few businesses open. I asked them how they feel about the stiff upper lip. “Old fashioned” and “outdated”, they said. The conversation quickly turned to Covid-19. The shuttered shops lining the quiet streets told of an uncertain present and a fear for the future.

Silence descended as we gazed through the empty market with its smooth cobblestones worn down by thousands of feet and hundreds of years of history. Above, silver dragons adorned with the St George’s Cross sat perched at the market crossroads, surveying the empire. Floral garlands hung low between the streets, the kind that makes you think of V-E Day celebrations. It was an image that perfectly fused old Britain with our current crisis.

“I suppose we’ve just got to soldier on, haven’t we,” one of the men finally said.

Epidemics Reveal the Truth About the Societies They Hit