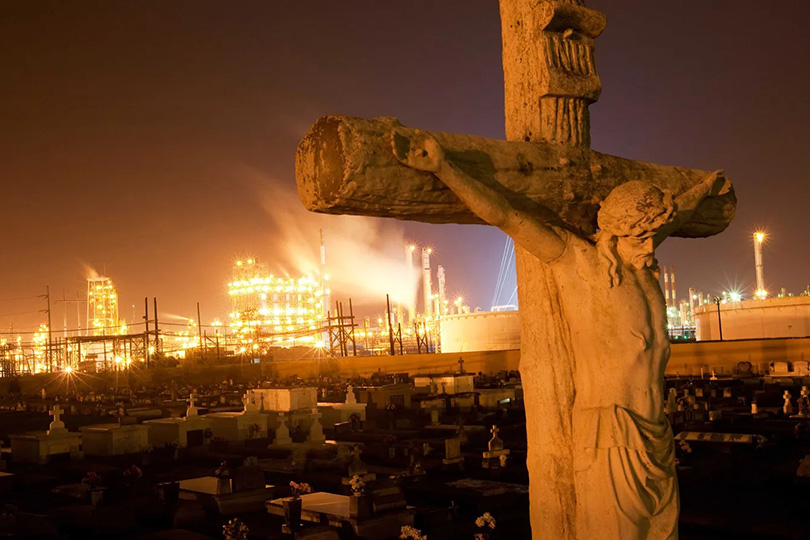 What is violence? At its most obvious, it is a bullet fired at flesh, a knee pushed into a neck, or a mob storming the Capitol. In law, it is criminal, domestic, sexual, alcohol-fuelled. On the battlefield, it is state-sanctioned. Often violence is understood by the adjectives appended to it: for some, it can be necessary or proportional, while for others, it is occasionally senseless, mostly brutal, never justified.

Yet there is another kind of violence that is nowhere near as visceral as the type described in news headlines and courtrooms. Called "slow violence", this is harm and damage that plays out over years or decades. The perpetrators may not be obvious, but the victims are. How, where and to whom does slow violence happen?

The idea of slow violence can be traced back to the 1960s, though it wasn't called that back then. In 1969, the Norwegian sociologist Johan Galtung – known as the "father of peace studies" – argued that violence could be enacted by more than fists or weapons. Violence, he argued, could also be "structural".

For Galtung, this kind of violence happens when a society causes harm to its citizens and their property, often invisibly, through social or health inequalities, racism, sexism or another systemic means. The victims have foreshortened lives, and have suffered both bodily and psychologically. But while the impact is tangible, the blame is harder to pin down.

How does this violence remain unnoticed? One of the primary reasons is its pace.

This year marks a decade since the environmentalist and literary scholar Rob Nixon of Princeton University coined the term "slow violence". Like Galtung, he described a kind of violence that was structural, but he was the first to point out that it could also be experienced over many years, possibly even generations. It occurs "gradually and out of sight, a violence of delayed destruction that is dispersed across time and space, an attritional violence that is typically not viewed as violence at all," he wrote.

According to Nixon, slow violence can be found embedded within the "slowly unfolding environmental catastrophes" of long-term pollution, climate change or nuclear fallout. But it can also describe many kinds of harm that affect individuals and communities at a pace too slow to assign blame.

Like fast violence, people still suffer or even die, but the protagonists of the act are diffuse and often outside the reach of prosecution. Some of the blame might lie with an entire industry subtly polluting an ecosystem legally and collectively, while some blame may lie with a government policy written in a distant capital years before. The point is that slow violence does not always have a clear perpetrator.

"Slow violence provokes us to expand our imaginations of what constitutes harm. It insists we take seriously forms of violence that have, over time, become unmoored from their original causes," says geographer Thom Davies of the University of Nottingham, UK.

Davies studies what he describes as "toxic geographies" where such harm is clear to see. These places might be a refugee camp, a village embedded on a landfill, or the zone around Chernobyl. In 2019, he looked specifically at the case of "cancer alley" alongside the Mississippi River in Louisiana. This is one of the US's most polluted regions, and he found that the concept of slow violence provided a new lens to describe what he observed there.

"As you drive along the concrete interstates that rise above the swamps and bayous of south Louisiana, a metallic assemblage of catalytic crackers, reformers, visbreakers, and fractionating columns dot the horizon," Davies wrote in a journal article describing his ethnographic studies in the region. "The lower course of the Mississippi River hosts the densest cluster of chemical facilities in the Western Hemisphere."

In the nearby rural settlement of Freetown, Davies interviewed people about their experiences living so close to this industrial landscape. He describes how one resident, called Daisy (not her real name), has observed changes to her community playing out over years. "For seven decades she has witnessed the slow accumulation of pollution gradually impact the local area: the invasive chemical smells, the gossiped-accounts of elevated cancer rates, and the vegetation in her garden wilting where once it thrived. At times, she explained, ‘the air is so full with gas you can hardly breathe'."

In cancer alley, the residents are often low-income black Americans. Freetown was once part of the Pedescleaux-Landry sugar plantation and was founded by former slaves. Daisy's family bought their land in the late 1800s. "It was beautiful to live here before they started putting those tanks and things," she told Davies. "It really was. It really was a nice place to live. Everything was all healthy."

In another Louisiana community, slow violence plays out in a different way, says Davies. On a narrow ridge of land called Isle de Jean Charles, the residents there are seeing the creeping impacts of climate change getting closer every year. "The levees of the Mississippi are being built up and up, and they're noticing that more and more water keeps getting into their homes and it's flooding," says Davies. "No one is going to drown, but it's slow, and psychologically that's extremely damaging." Slow violence, he argues, can be mental as well as physical.

A key point about this category of harm is that it is rooted in inequality. When Galtung was writing in the 1960s, he pointed out that such violence represented a curtailing of potential, where somebody is prevented from living a better life. The point is that it affects some, but not all, communities. Those with more privilege can escape it.

The nature of slow violence also means it tends to compound, with one type begetting another. One example might be the "John Henryism" effect, which BBC Future has written about earlier in this series. This is a theory proposing that the stresses that some communities go through to thrive in the face of inequality and racism can lead to worse-than-average cardiovascular health problems. Many low-income residents of the Baton Rouge area of Louisiana have also been disproportionately affected by the Covid-19 pandemic, says Davies.

Slow violence might be too incremental to make headlines or provoke outrage, but Davies cautions that it is not hidden to everyone. Nixon described it as "spectacle deficient" and "uncinematic", which is true. But totally unseen? It depends on who is looking.

"If you look at the lived experience of people who are exposed to slow violence, they can notice the incremental changes that are happening to their ecosystems and environment," he says. While it happens over the spans of decades or generations, those who have lived it can describe it well enough. So, while slow violence may not have an obvious perpetrator, and its pace may make it difficult to record, punish or litigate – what matters is that it is always felt.