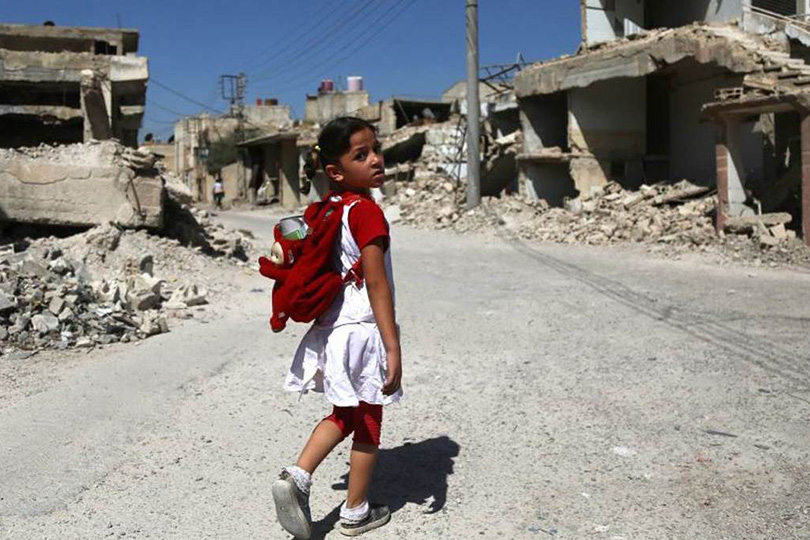 Though Human Rights Day this year marks the 70th anniversary of the adoption of the Universal Declaration of Human Rights, it is hardly a happy occasion. Around the world, children in conflict zones are increasingly coming under fire because those charged with upholding international law have turned their backs on it.

This Human Rights Day (December 10) marks the 70th anniversary of the United Nations General Assembly’s adoption of the Universal Declaration of Human Rights. Sadly, events over the past few years show that the world is failing to uphold the commitments enshrined in that document, particularly when it comes to protecting children.

For example, in separatist-controlled parts of Eastern Ukraine, where more than 200,000 children are receiving their education in militarized areas, bullets have struck kindergarten windows. In April, the Afghan air force, backed by US-led NATO coalition advisers, reportedly killed 36 students, teachers, and parents, and wounded 71 others, at a graduation ceremony. And in August, the Saudi-led coalition that has been waging war against Houthi rebels in Yemen dropped a bomb on a school bus, killing 40 boys between the ages of six and 11.

It is not hard to find many more horrifying examples of how children have come under threat in educational settings where they should be safest. When the international community adopted the Universal Declaration, it had just experienced a terrifying world war in which such atrocities were numerous. At the time, world leaders were determined to build a fairer, more harmonious global order that would ensure basic protections for all.

But, clearly, the Universal Declaration is as necessary and relevant today as it was then. According to UNICEF, the number of children living in conflict zones has risen by 74% over the last decade. Moreover, a new report from the Global Coalition to Protect Education from Attack (GCPEA) finds that between 2013 and 2017, there were more than 12,700 attacks on educational settings, harming more than 21,000 students and teachers in at least 70 countries.

Education is a fundamental human right and one of the most important things the world can give a child. The organization I represent, the Education Above All Foundation, regards education as the ultimate “enabling” right, because it is the single most effective means of reducing poverty, generating economic growth, and creating peaceful and just societies.

Despite the importance of education for advancing most other human rights, those in positions of power have failed to protect it. In fact, schools are even being used as recruitment centers for child soldiers. According to the GCPEA report, anti-government groups in South Sudan press-ganged more than 500 children from schools between December 2014 and May 2015. In July 2013, a female teacher in the Democratic Republic of Congo reported that local militants visited her school multiple times each month to abduct schoolgirls who were then raped and held captive, sometimes for months.

For these and countless other children, there is no such thing as a “safe place” to learn and plan for the future. The threat of death or injury is constant. In too many parts of the world, children are being singled out precisely because they symbolize the future. This is not just a limited case of rebels looting classrooms. Rather, warring parties in many conflict zones are systematically targeting children as a tactic to destabilize and demoralize communities so that they can never recover.

Seven decades after World War II, world and regional powers are yet again waging proxy wars that are depriving children in conflict zones of a future, and sometimes of their lives. In many cases, the very countries that should be standing for peace and security are themselves breaching the rule of law and international commitments to uphold human rights.

Nowhere is this problem more visible than in the UN Security Council. The routine misuse of the veto by one of the five permanent members of the Security Council ensures that there will be no accountability for attacks on children and civilians in conflict zones. Those who flagrantly violate human rights need no longer fear the consequences.

This is a moral outrage. All perpetrators of violence – regardless of whether they are a permanent member of the Security Council, a powerful G7 member state, or one of countless armed groups – must be subject to the full force of international law.1

On this Human Rights Day, it is time to shine a spotlight on the impact that war and conflict are having on children’s right to education. In an increasingly interdependent world with intensifying challenges, it has become all the more necessary to champion education as the key ingredient in economic development, peace, and prosperity. We cannot wait another 70 years to secure this fundamental human right. All those who perpetrate or enable violence against children must be held accountable – with no exceptions.

* Maleiha Malik is Executive Director of Protect Education in Insecurity and Conflict (PEIC), a program of the Education Above All Foundation.