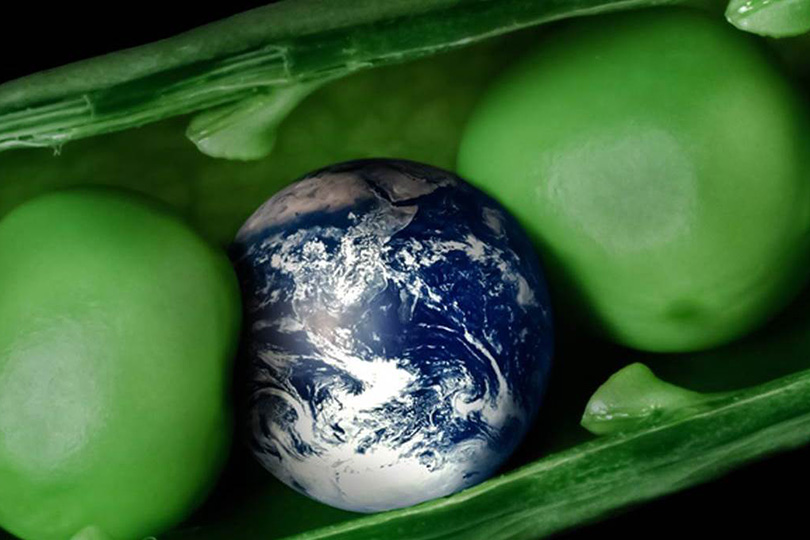 Our diets are becoming less healthy, and global food production is increasingly unsustainable. A new report suggests that the planet can sustainably provide a healthy diet for ten billion people in the future...

Our diets are becoming less healthy, and global food production is increasingly unsustainable. A new report suggests that the planet can sustainably provide a healthy diet for ten billion people in the future, but only if we make big changes in what we eat and how we produce it.

Our current diets are bad for our health and are harming the planet. Two billion people are now overweight or obese. Poor diet is the biggest cause of noncommunicable disease in the world, posing a greater risk of morbidity and mortality than unsafe sex, alcohol, tobacco, and drug abuse combined.

The way we produce and consume this food, meanwhile, damages Earth’s life-support system. It accounts for about one-quarter of greenhouse-gas emissions and is the biggest cause of land-use change, biodiversity loss, and water extraction, leaving rivers dried out.

The sheer volume of books on healthy eating and weight loss suggests that people want to move to healthier diets. But few countries are taking action to improve diets and preserve the environment. The big question is whether we can sustainably provide a healthy diet to a global population that is projected to reach ten billion by 2050.

Two years ago, the EAT-Lancet Commission, comprising 37 scientists from 16 countries – me included – set out to provide an answer. We began by determining what a good diet for a healthy life should contain. We then explored the implications of such a diet for global sustainability of food production in the future.

The Commission published its findings in January in the medical journal The Lancet. Our report identifies, for the first time, scientific targets for diets and the global food-production system. With more than 5,000 stories about the report already in the international media, its release clearly has hit a nerve. That is not surprising, given that its findings have implications for food companies, farmers, and consumers everywhere.

Our main conclusion, supported by reams of peer-reviewed evidence, is that feeding ten billion people on a sustainable planet is possible. But doing so will require a transformation of the food system to address obesity, improve health, end forest loss, curb greenhouse-gas emissions, and protect the oceans.

The world must do three big things in particular. It needs to halve the amount of food waste by 2050. It must move to more efficient and sustainable production systems and invest more in healthier crops. And people need to eat more fruit, vegetables, nuts, and legumes and reduce their dairy and red-meat consumption. Our analysis indicates that moving to such a balanced diet could prevent 11 million premature deaths per year.

To achieve this, the Commission proposes a “planetary health diet” of 2,500 calories per day for an average global citizen leading an active life. The diet provides daily consumption ranges for different food groups (such as 200-600 grams of vegetables per day). We recommend that people eat significantly less red meat than they currently do in most parts of the world.

A typical weekly meal plan under our proposal might include a hamburger, a couple of chicken dishes, and one or two fish meals, with the others being plant-based. Vegetarian or vegan diets also fall entirely within our food group ranges. Alternatively, people might use animal-based foods as flavorings rather than as the main part of a meal.

We went to great lengths to stress that this diet is flexible and can be adapted to different cultures and different produce, whether Asian, European, African, or those of the Americas. The common Mediterranean diet of a generation ago, with plenty of fresh vegetables and fruit, has much in common with our planetary health diet. Similarly, those of us in Nordic countries used to consume less meat and fewer dairy products, in line with the Commission’s recommendation.

It is important to recognize that shifting to the planetary health diet will not in itself lead to sustainable production. We also need to improve how we produce what we eat. There is no single path to sustainable production. Whether food producers operate large businesses, intensive farms, smallholdings, or organic farms, all can support the dietary and sustainability transition.

Since the report was launched, the Commission has been overwhelmed by the support shown for its conclusions. At the same time, several industry groups and other commentators have argued that meat and dairy are an important part of a nutritious diet. While I agree that they can be part of a healthy diet, that part should be much smaller than it is today.

Some argue that it simply is not feasible for large populations to adopt healthy, sustainable diets. Globally, however, we can trace how diets have changed dramatically in recent decades. Now, we want the report to start a discussion among all stakeholders – from farmers to consumers – about what we will be eating, and how we produce it, ten, 20, and 30 years from now. If we can do that, our food system can benefit, rather than harm, our own health and that of the planet.

* Line Gordon is Director of the Stockholm Resilience Centre at Stockholm University.