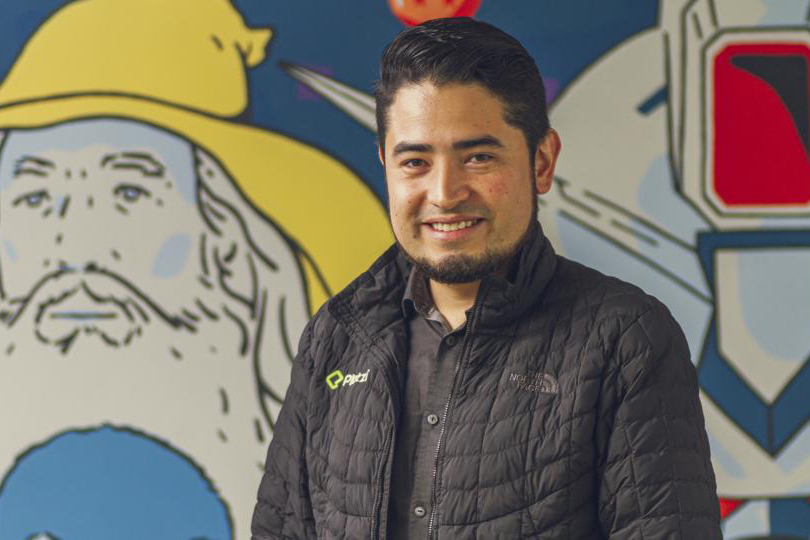 Freddy Vega didn’t hate college. He was a proud computer science student at one of the best colleges in Colombia, the National University in Bogota. But he had a problem.

As a teenager, he taught himself how to create interactive products in Flash, a technology very popular at the time. He was good enough to land his first gig at the age of 14. In 2004, several jobs later and at the age of 17, he created Cristalab, a website for sharing programming knowledge.

It was a side gig between work and then college. But la Nacho, as Colombians call the university, is a tough place. “The only way to survive was to study full time,” Vega remembers.

Meanwhile, Cristalab was attracting people from all over the Spanish-speaking world: at its peak, it had three million monthly visitors. It brought in enough advertising revenue to cover salaries for Vega and two other employees. For a man raised in a working-class family by a single mother and his grandparents, who once wrote a glum post complaining he could not afford a scanner to digitise his comics, it represented a triumph.

“One day I just stopped going to college,” Vega remembers. By 2006, Cristalab was a better use of his time. “The more work I put in on it, the more it grew.”

Six years later he co-founded Mejorando.la, an e-learning platform, with Christian van der Henst, a former competitor. It was renamed Platzi in 2014, a more English-friendly name. Through this platform, which offers short online courses in key skills, Vega is helping young Latin American developers make the same kind of strides that launched his success – and providing a new non-traditional route up the career ladder.

‘It makes no sense!’

In Platzi offices in Bogota, Mexico City, San Francisco or Madrid, employees often call Vega – the CEO of the company – by his first name. Many reference his comments when they want to reinforce a point. Now 33, he combines brutal logic with keen sense of urgency and sharp pragmaticism. And those traits shine through in Platzi’s pitch: it can help people learn skills that they can monetise, fast.

Platzi has grown rapidly, serving more than one million students since its inception. It currently has 110 employees and offers some 300 different courses. A big part of its success is down to a focus on technology-linked skills like programming, design techniques or online marketing.

These abilities are in high demand in Latin America, the region with the biggest skills gap in the formal economy. Wages keep rising as a result, but the supply of talent is not keeping up, so companies are struggling to find the people they need.

Universities and education experts are aware of this issue. “It is very clear that the university model must change and adapt to an everchanging world,” says Francisco Cajiao, a Colombian education consultant and former university president.

These abilities are in high demand in Latin America, the region with the biggest skills gap in the formal economy

Most experts say there is a bottleneck in the education pipeline. According to World Bank figures, 50.7% of young people in Latin America are enrolled in some kind of tertiary education. But this figure includes trade schools and technical training, meaning the number of students attending university is smaller.

In general, having a university degree improves your income. But access is unequal – the poorest half of the population accounts for just a quarter of all higher education students.

Getting places at top universities is highly competitive: the coveted National University – the one Freddy quit – admits one undergraduate for every 16 applicants, for example. Costs vary – some public universities are free while private universities (which tend to be less competitive) can cost up to $15,000 per year. While some loans and subsidies are available, most of the better programmes expect students to be enrolled full-time, making it hard to hold down a job.

For Cajiao and other experts, the solution is to widen the pipeline and create more places: “Tuition must go down and governments should invest in education,” he says.

But Vega does not believe that universities can expand to cover the demand. Even if they did, he thinks the problem is the pipeline itself – he believes the university model is outdated. “Is it normal to have a social contract where people spend four years in college, get a huge debt, then get a job and spend their first year there learning everything they need to do? It makes no sense.”

Platzi offers a different approach for those looking to the tech sector: a menu where you choose courses that teach you what you want to do. If you want to build a website, you start by learning coding basics, then a couple of basic programming languages, web design and even some animation. You can even take a course in freelancing when you want to monetise your new skill. An annual subscription costs $299, which opens it up to a wider demographic: an internal survey of Platzi’s students found half of respondents were earning less than minimum wage.

Amid growing debate globally about how universities should deliver education in a world being changed by technological innovation, Platzi’s rapid rise has sparked conversations in some quarters about whether it, and platforms of its ilk, could represent a better path to employment.

The main concern about universities among prospective students is a perceived delay in updating course content. “Some colleges do not change their programmes in years, and in software development you cannot let even the slightest new development go,” says Manuel Ojeda, a developer and Platzi student.

Vega believes “there is nothing university offers that Platzi cannot offer”. But the company’s official position, on its website, is more circumspect: Platzi does not replace university, just “complement” it. Nicole Chapaval, Platzi’s head of staff and one of its longest-serving employees, says the company offers “a solution for people who will not invest the time or the money college education demands”.

Obdulio Velazquez, president of the University of the Savannah, one of Colombia’s biggest colleges, says informal education “complements university education, as it aims at offering content or updating knowledge”.

But he says university plays a broader role in educating students for life: “It teaches you how to learn and to think by yourself.” Andrea Escobar, executive director of a charity called Businesspeople for Education, agrees with him: “Colleges teaches you what can you expect in life, it shows you what you can aspire to.”

“Platzi and college are not comparable,” says Sebastian Reyes, a naval engineer and Platzi alumni who works as operations director for a software company. “University offers depth and structure, but Platzi is a source of complementary and up-to-date knowledge”.

On a practical level, Velasquez and Escobar see limitations in Platzi’s model. “It does not work for all knowledge fields,” says Escobar. Velasquez agrees: “You can’t educate a lawyer, a medical doctor or a psychologist online.”

Vega acknowledges legal training is difficult because it’s different in each country, hence not well-suited to Platzi’s model, but says “it does not mean we cannot do it”. While Platzi may not be able to tackle practical medical training, it could perhaps offer training updates or recertification courses if it made business sense. Platzi already teaches some humanities courses, but business realities make expansion unlikely. “The first incentive for someone to engage in online education is increasing their income, and most students do not see a direct path between studying humanities and earning more money,” he says.

One thing universities do offer is connections; many people find jobs through classmates or professors as part of alumni networks. Some prestigious employers explicitly favour elite universities.

But Vega believes this is changing. “More and more companies are hiring without looking at a candidate’s college,” he says. Many start-ups simply post listings in professional groups on Facebook or LinkedIn and hire based on experience and technical tests.

Still, Chapaval says Platzi is creating a job posting service for students and devising ways to strengthen bonds between them. It also expects to get a boost from former students who have created successful start-ups; one such is Tranqui, an AI-powered financial chatbot that has recently been selected by Y Combinator, one of Silicon Valley’s top start-up accelerators.

One thing the online platform can offer over the formal education sector is the idea that people should “never stop learning”, as Platzi’s motto states. It creates loyal subscribers but more than that, it’s increasingly obvious that as technology develops how workers update their skills will be a factor in how well they thrive. It’s also how Vega built his business.

“He has always been hungry,” says Diana Reyes, his wife and part of the Platzi team. She has been with him since the early days, when Platzi’s early versions operated out of her flat. “Whenever he needed to do something,

he learned how to do it.”

And that is also part of what draws students to Platzi. Many see themselves in Freddy Vega, in his humble origins and his big ambitions. “Why must success depend on going to the right college or being born in the right family?” he asks.

And he found the answer for himself: it does not.