Russia Will Not Allow Turkey to Attack Syria, Sends in Troops to Front Lines 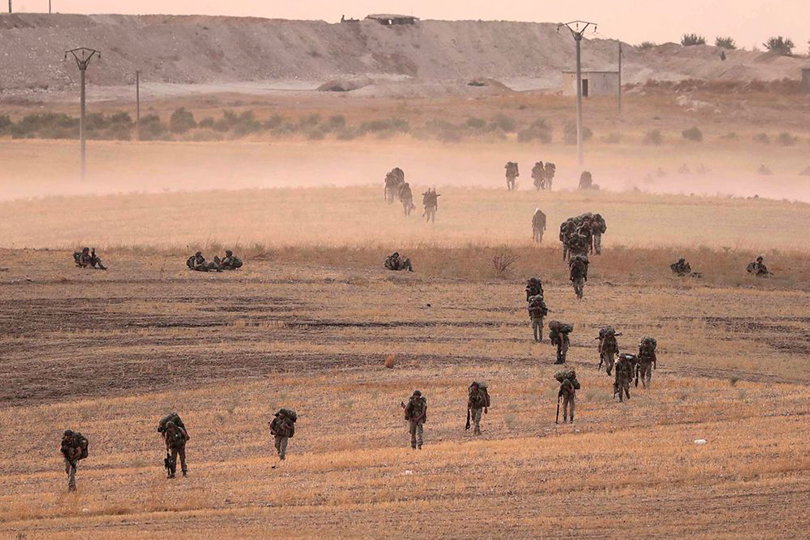 Russia has warned it would prevent Turkey from attacking Syrian troops after the U.S. withdrew from a looming clash between rival factions in the war-torn country.

Alexander Lavrentiev, the Kremlin's special envoy to Syria, downplayed the danger of a clash between the Turkish and Syrian militaries, telling RIA Novosti Tuesday that "the collision, first of all, it is not just that no one is interested, it is simply unacceptable."

"We will not allow this," he said.

The same outlet cited the Russian Defense Ministry as saying that its troops had been deployed to the front lines between the two opposing armed forces engaged in Syria's eight-year civil war. Russia, alongside Iran, has backed Syrian President Bashar al-Assad against a rebel and jihadi uprising supported by Turkey.

A third faction, the mostly Kurdish Syrian Democratic Forces were supported by the U.S., but have been left behind by an ongoing withdrawal as Turkey, a member of the NATO Western military alliance, mobilized Syrian opposition fighters in an operation to take on Kurdish separatists. As a result, the Syrian Democratic Forces and the Syrian government have struck a deal under Russia to join forces in the face of their common foe.

The U.S., along with regional allies Israel, Qatar and Saudi Arabia, also initially supported Syria's 2011 uprising, but earlier anti-government gains were reversed as Russia, Iran and allied militias helped to bolster beleaguered Syrian troops across the country. The rise of the Islamic State militant group (ISIS) also saw the U.S. shift from an increasingly Islamist opposition to the Syrian Democratic Forces to defeat the jihadis, whom the Syrian government also battled in a rival campaign.

Kurdish-led victories throughout Syria's north and east led to the establishment of an autonomous administration that received de facto backing from the U.S., but was left unrecognized by other local and regional actors. Turkish President Recep Tayyip Erdoğan ordered two cross-border operations designed to dismantle Kurdish groups his government considered terrorist organizations because of an insurgency at home. Last week he launched a third, deeper incursion following a phone call with President Donald Trump.

Trump has long demonstrated a desire to withdraw from Syria, especially as ISIS was decimated across the country. He initially signaled support for the Turkish-led attack, but has since joined Pentagon officials in condemning it while still withdrawing troops from the country.

As Newsweek reported exclusively Monday, the U.S. military has handed over positions in the northern Syrian city of Manbij to incoming Russian forces. Moscow, as a result of its support for Syrian troops and the recent Kurdish deal with Damascus, has effectively become a guarantor for the strategic city and potentially others located along the explosive Turkish-Syrian border.

While Russia has asserted its presence on the ground in the wake of the U.S. departure, it has remained in contact with Turkey. The two countries, along with Iran, have formed a trilateral process designed to end Syria's civil war and met as recently as last month in hopes of pushing for peace.

With Moscow and Ankara behind opposing advances and Tehran outright condemning the Turkish operation, however, the three again found themselves at odds over the situation in Syria. Elsewhere in the Arab World, only Qatar has voiced support for Turkey's actions.

Abu Dhabi has already reopened its Damascus embassy, with Riyadh potentially following suit as Moscow campaigns for Syria's return to the Arab League after an eight-year suspension due to alleged war crimes.