Putin in the Gulf: Working with the Saudis on arms, oil and Syria 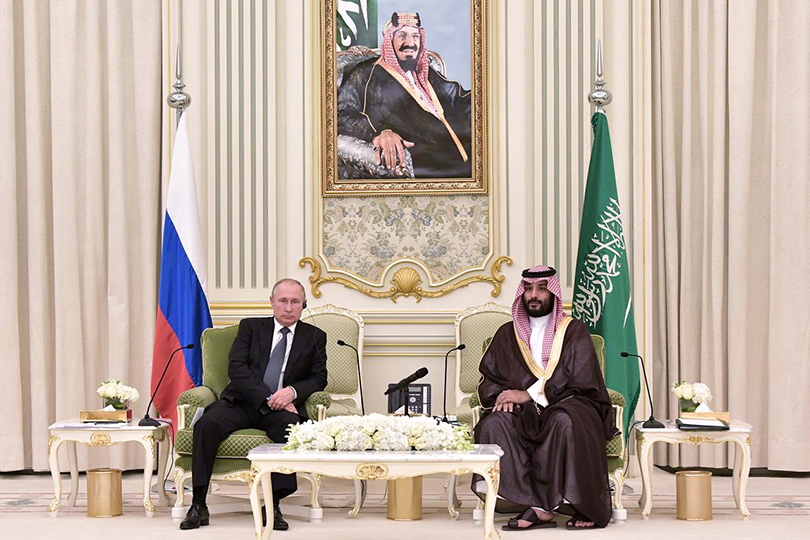 n Monday, Russian President Vladimir Putin arrived in Saudi Arabia at the start of his Gulf tour which includes the United Arab Emirates.

It took Russia and Saudi Arabia two years, since King Salman's historic visit to Moscow in 2017, to prepare for the reciprocal visit that has resulted in some significant political agreements and economic deals.

In many ways, the volatile situation in the region helped a great deal to make Putin’s visit look very timely, needed and important.

The recent attacks on Saudi oil facilities, which caused fluctuation in the oil market, coupled with the ever-growing tensions between Riyadh and Tehran, and the new Turkish military incursion in Syria, are events of high importance, not only for Russia and Saudi Arabia, but also for the broader region.

Decisions and agreements by both Russia and Saudi Arabia could have a powerful impact on regional stability. It also provides Russia with a good opportunity to market itself as a major power broker.

Putin is accompanied by a big delegation of businessmen which underlines the improving economic ties between Moscow and Riyadh.

Putin's visit resulted in the signing of more than 30 economic agreements worth about $2bn and covering many areas, including the railway industry, energy, petrochemistry, agriculture, joint investments, medical production, and more.

Although trade turnover between the two countries exceeded $1bn only recently, it has a big potential to grow.

Kirill Dmitriev, chief executive of Russia’s sovereign wealth fund (RDIF), told CNBC that Russia’s growing investments in and trade with Saudi Arabia should be seen as “building bridges” rather than engaging in strategic competition that many in the West regularly warn about.

Sovereign funds of Moscow and Riyadh - Russian Direct Investments Fund and Saudi Private Investments Fund - are the main drivers of economic cooperation between the two countries. Since 2017 Saudi Arabia already invested about $2.5bn - out of the promised $10bn - in the Russian economy and the two funds eye increasing joint investments in the coming years.

The work which the two countries have done since the Saudi king's visit to Russia indicates that both parties have increased their economic cooperation in the intervening period. However, there is still a lot of work to be done as the potential of the bilateral relationship is much bigger than its current state.

That said, Russia and Saudi Arabia are still far apart on quite a number of important regional issues, such as Iran, Syria and Yemen. However, while holding different views, Moscow and Riyadh agreed to disagree, while increasing their cooperation in areas of mutual interest.

The OPEC+ oil deal, which saw Russia agreeing with Saudi Arabia to extend by six to nine months a deal with OPEC on reducing oil output, is the brightest example of such an approach. Promoted by Saudi Arabia and Russia, this agreement united the two states and demonstrated that, despite having differences, they can work together respecting mutual interests.

Following the attack on Saudi oil facilities, Riyadh asked Moscow to help with the investigation to identify the culprits. “I said yes, we are ready to share anything that might be necessary, everything we have for a thorough investigation,” Putin told the media.

Although Saudi Arabia stated it did not need facilitators to help improve its ties with Iran, it is open to a dialogue with everyone who wants security in the Gulf. Moscow, having good relations with Tehran, will certainly try to avoid taking sides.

However, this doesn’t exclude the possibility of a purchase, as Moscow has developed and successfully tested electronic anti-drone warfare systems in Syria which increases its chances to sell it to the Saudis.

Moreover, Rosoboronexport, the Russian agency for military exports, announced that it would present the latest Russian systems for combating unmanned aerial vehicles and other air defence systems at the Dubai Airshow in November.

This will be a good opportunity to market its arms.

The Turkish military operation in north-eastern Syria has - ironically - pushed Syrians to unite. Syrian Kurds struck a Russia-brokered deal with the Syrian government at Khmeimim base. The deal envisaged the deployment of the Syrian Arab Army units along the Syrian-Turkish border.

The agreement touches only the military part of the conflict, leaving the political settlement between the Kurds and Damascus for later.

By conducting a military operation in north-east Syria, Turkey is attempting to improve its position at the negotiation table that was weakened due to the unresolved situation in Idlib.

This development is also quite important for the Saudis since not only does Iran have a strong presence in Syria but so does Turkey. This dynamic might change Riyadh’s position on Syria and make it more open to a gradual recognition of the Syrian government.

The UAE and Bahrain have already made steps to restore their ties with Damascus, even participating in the annual Damascus international fair despite being told by the US not to. They justified their decisions by the need to counter-balance growing Iranian and Turkish influence in Syria.

It seems that - with Russia's help - sooner rather than later Saudi Arabia might pursue a policy of re-engagment with Damascus and Russia will play an important role as broker.