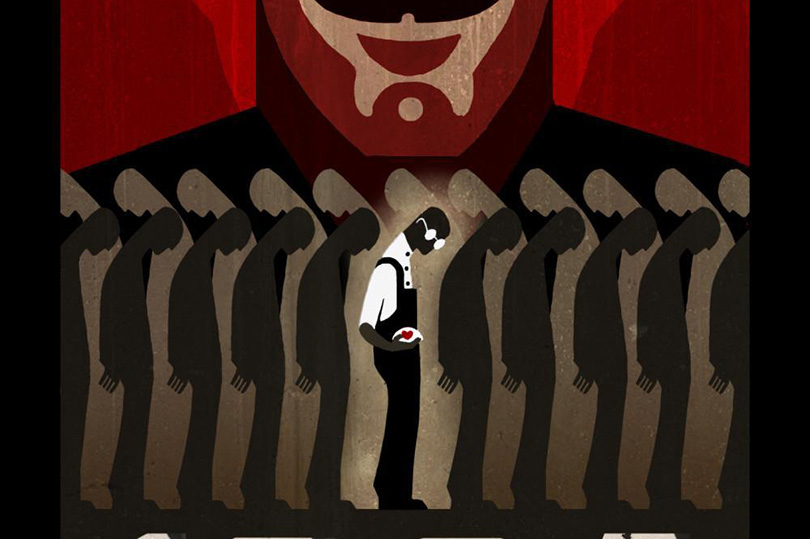 Reading 1984, George Orwell’s claustrophobic fable of totalitarianism, is still a shock. First comes the start of recognition: we recognise what he describes. Doublethink (holding two contradictory thoughts at the same time), Newspeak, the Thought Police, the Ministry of Love that deals in pain, despair and annihilates any dissident, the Ministry of Peace that wages war, the novel-writing machines that pump out pornography to buy off the masses: Orwell opened our eyes to how regimes worked.

But now we can read 1984 differently: with anxious apprehension, using it to measure where we, our nations and the world have got to on the road map to a hell Orwell described. Prophetic? Possibly. But stirring, moving, creative, undeniable and helpful? Yes. A book published on 8 June 1949, written out of the battered landscape of total war, in a nation hungry, tired and grey, feels more relevant than ever before, because Orwell’s 1984 also arms us.

The book, with its disorientating first sentence, “It was a bright cold day in April, and the clocks were striking thirteen”, defines the peculiar characteristics of modern tyranny. Winston Smith, the protagonist, works as a censor in the Ministry of Truth in a constant updating of history to suit present circumstances and shifting alliances. He and his fellow workers are controlled as a mass collective by the all-seeing and all-knowing presence of Big Brother. In 1984 television screens watch you, and everyone spies on everyone else. Today it is social media that collects every gesture, purchase, comment we make online, and feeds an omniscient presence in our lives that can predict our every preference. Modelled on consumer choices, where the user is the commodity that is being marketed, the harvesting of those preferences for political campaigns is now distorting democracy.

Orwell understood that oppressive regimes always need enemies. In 1984 he showed how these can be created arbitrarily by whipping up popular feeling through propaganda. But in his description of the ‘Two Minutes Hate’ he also foresaw the way in which online mobs work. Obliged to watch the violent film, (as everyone is), Winston Smith observes “The horrible thing about the Two Minutes Hate was not that one was obliged to act a part, but that it was impossible to avoid joining in…A hideous ecstasy of fear and vindictiveness, a desire to kill, to torture, to smash faces in with a sledgehammer, seemed to flow through the whole group of people like an electric current”. Now political, religious and commercial organisations all trade in whipping up feelings. Orwell uncannily identified the willing collusion in hate that such movements can elicit: and of course Winston observes it in himself. So, by implication might we, in ourselves.

Then there is Orwell’s iconic dictator Big Brother: absurd and horrifying in equal measure. Orwell’s writing is rooted in the struggles between the giant ‘-isms’ that disfigured the 20th Century. He fought against Fascism as a volunteer in the Spanish Civil War (believing pacifism was a luxury paid for by other people) but realised the hollow promise of Communism, when the anti-Stalinist group he was fighting for was hunted down by the pro-Stalin faction. He witnessed first-hand the self-deception of true believers. Today there is another set of ‘-isms’, such as nationalism and populism who operate through the mobilisation of that most dangerous of feelings, resentment. And everywhere you look in the contemporary world, ‘strong’ men are in positions of power. They share the need to crush opposition, a fanatical terror of dissent and self-promotion. Big Brothers are no longer a joke but strut the world.

But the greatest horror in Orwell’s dystopia is the systematic stripping of meaning out of language. The regime aims to eradicate words and the ideas and feelings they embody. Its real enemy is reality. Tyrannies attempt to make understanding the real world impossible: seeking to replace it with phantoms and lies. Winston Smith’s first audacious act of dissent had been to hide from the all-seeing camera and write a diary – to compose his own account of himself and his inner world. He knows that the acts of writing and describing mark him out for the death penalty if he is discovered. When he is finally broken by torture he agrees that “two plus two equals five.” He had discovered that they could indeed “get inside you”, and “Something was killed in your breast; burnt out, cauterised out”.

The terror in 1984 is the annihilation of the self and the destruction of the capacity to recognise the real world. There is no fashionable or casual relativism in Orwell’s work: he understands how hard it is to get things right. However, this story pins down the terror of a world where people have fewer and fewer words to use and whose thinking is distorted by ideologies.

All over the world where tyrannies rule 1984 is banned, but of course it is pirated. And sales have surged too in countries known as stable democracies. In India and the UK, in China and Poland people are turning to 1984. In the US, sales surged as people searched for a way of getting to grips with the reality of the Trump administration.

You cannot separate Orwell’s work from the man. He is increasingly viewed as a kind of a saint ,but how he would laugh at the statues of him that are sprouting up. His views towards feminists (though not women), vegetarians and other groups would hardly pass the test now. But he was a man who lived by his beliefs. He made himself genuinely poor; he fought for what he thought was right; he was unfailingly generous and kind to other writers, and yet he taught himself to try and see the world as it was not how he would like it to be. He was never compliant, and forensically unearthed for our gaze the worst of himself. His aloof integrity is unique.

It is not only that we live in a world transformed by Orwell’s insights in that it shapes how we see oppression. But 1984 is also handbook for difficult times. Knowledge is a kind of strength and we are all being tested.