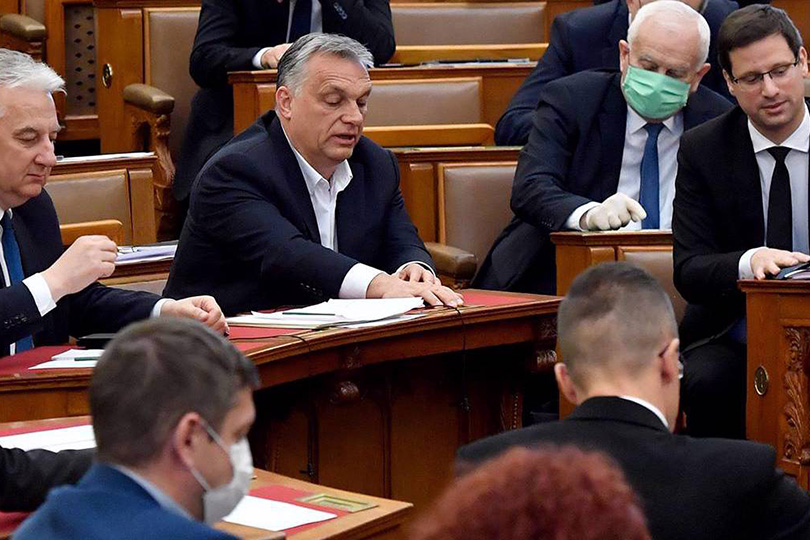 It is crucial that opposition parties are broadly on board with measures taken to address what seems like a once-in-a-century public-health crisis. But the line between government and opposition must not be blurred in the name of “national unity,” and the mechanisms of political accountability must be strengthened, not weakened.

There is no doubt that the coronavirus is a global emergency. There is also no doubt that governments will use this emergency to add to their powers. And some of them probably won’t relinquish their new powers once the threat is over.

It is crucial that opposition parties are broadly on board with measures taken to address what seems like a once-in-a-century public-health crisis. But the line between government and opposition must not be blurred in the name of “national unity.” Criticism by opposition leaders should not be branded as illegitimate “infighting.” And the mechanisms that allow oppositions to hold governments accountable must be strengthened, not weakened.

Emergencies have two effects: in democratic states, they concentrate power in the executive. Leaders claiming new powers can usually count on citizens’ support. Even US President Donald Trump, whose performance has been disastrous from the start, is benefiting from a rally-around-the-flag dynamic.

The other effect is more obviously pernicious: in countries already threatened with what some social scientists are now calling “autocratization” (the reverse of democratization), leaders are using the COVID-19 crisis to do away with the remaining obstacles to their permanent rule.

Russian President Vladimir Putin is in the process of making himself president for life. Israeli Prime Minister Binyamin Netanyahu is weakening the Knesset and the courts. Hungarian Prime Minister Viktor Orbán, the pioneer of “autocratization” in the European Union, can now rule by decree, and wants to suspend elections and referenda and give the government the authority to jail journalists.

Plenty of authoritarians conjure up pseudo-crises; in a real one, they can take what look like perfectly justifiable measures to crack down on opponents. Anti-terrorism legislation enacted in the wake of the September 11, 2001, attacks on the US was routinely used to repress legitimate forms of political dissent.

What is particular to the coronavirus pandemic is that one of the most obvious ways to protest against governments is disabled. When Putin announced changes to the constitution, demonstrations could be prohibited, because they would allow the virus to spread. When Orbán does away with elections, he can say that social distancing is incompatible with a procedure that calls on everyone to come to the same place on the same day. An entirely reasonable precaution allows autocrats to proceed unchallenged.

What can be done? In functioning democracies, parliaments and courts have to keep working. But if business and academia can shift online, there is no reason why these institutions cannot conduct “distance democracy.”

Parliaments – which have been losing power to executives anyway in recent decades – should accept selective rule by decree only for a strictly limited time, and only under circumstances in which rule by conventional law has significant drawbacks in dealing with the crisis. While rule by law, as opposed to decree, might be difficult when a vaccine must be found quickly, and resources must be deployed swiftly, there is absolutely no reason to suspend the rule of law itself (contrary to what prominent theorists of states of emergency, like the German jurist Carl Schmitt, long argued).

Most important, an opposition should support a government, but also offer alternatives, and, above all, hold a government strictly to account. It is often forgotten just how crucial it is for democracies properly to institutionalize the role of an opposition.

Mechanisms for doing this vary. They include a procedure enabling opposition leaders to reply immediately to ministers’ speeches, dramatize differences, and demonstrate an alternative; low thresholds for establishing committees of inquiry; opposition days, when an election’s losers set the parliament’s agenda; even installing opposition figures as the chairs of important committees (where much of the real work of parliaments gets done). A government is authorized to have its way, but, at all stages, an opposition must have its say.

New Zealand’s Prime Minister Jacinda Ardern has proposed a plausible solution in the face of the country’s lockdown and the temporary suspension of parliament. Rather than having a grand coalition or papering over all legitimate disagreement with the rhetoric of unconditional “national unity,” she has suggested a select committee chaired by the opposition leader, which can hold the government to account.

To prevent emergency measures from becoming permanent – especially once public attention has shifted elsewhere – the American law scholar Bruce Ackerman has advocated the ingenious mechanism of a “super-majoritarian escalator”: laws and decrees can be renewed periodically, but only if ever larger majorities agree to do so. This would focus political debate on the question of whether a return from the new to the old normal is possible. In particular, it would put the spotlight on protection of basic rights (think of the attempt by the Trump administration and UK Prime Minister Boris Johnson’s government to claim powers to hold citizens in detention during the pandemic).

And the autocrats? Opposition leaders and civil society should use all the space they still have to resist. Whatever they do, they will be maligned by governments that, even before the current crisis, tended to accuse whoever disagreed with them of betraying the nation.

More important still, while international attention on anything other than COVID-19 is in short supply right now, it remains crucial to speak out against the Putins, Kaczyńskis,and Orbáns of the world. Their citizens, alas, will learn soon enough how their kleptocracies have shortchanged health care. Under the circumstances, it’s all the more important that an institution like the European Commission closely monitor emergency measures in EU states.