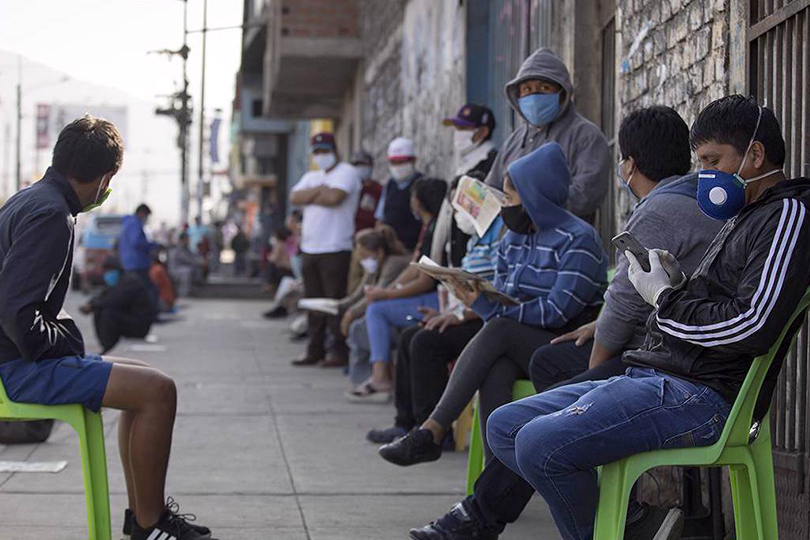 In most emerging and developing countries, COVID-19 is causing an economic hurricane. It looks increasingly like a Category 5, but the international community and many national governments prepared for a tropical storm.

Suppose you knew that a hurricane was coming, but meteorologists were uncertain if it would make landfall as a Category 2 or a Category 5 storm. Which scenario should you prepare for?

The problem you face reflects the costs of assuming that it is a Category 5 when it is only a Category 2 and vice versa. The latter scenario implies deaths and destruction that could have been avoided through evacuations, well-supplied shelters, and precautionary shutdowns. The first scenario implies unnecessary preventive costs. In the case of hurricanes, we all agree that it makes sense to err on the side of caution for the same reason that it is better to be five minutes early when catching a train than five minutes late.

In most emerging and developing countries, COVID-19 is causing an economic hurricane. It looks increasingly like a Category 5, but the international community and many national governments prepared for a tropical storm. To marry my metaphors, this is a recipe for a train wreck.

It did not start that way. Arguably, on the epidemiological front, the world acted quickly: more than 80 countries imposed lockdowns between March 9 and April 2 – some, like El Salvador, before they had their first confirmed case. The strategy, in Tomas Pueyo’s evocative terms, was to hit the coronavirus with a “hammer” (the lockdown) and then to “dance” with it by adopting much less stringent policies that can contain its spread while permitting a return to a semblance of normality.

The strategy worked remarkably well in places as diverse as Albania, Jordan, Israel, Lebanon, Tunisia, Costa Rica, Belize, Uruguay, Thailand, and Namibia – so well that a strategy based on testing and contact-tracing became both feasible and effective. But it did not prevent deadly peaks in Italy, France, Spain, the United Kingdom, and the United States that have been very slow to subside. Declining support for continuing the lockdown means that these countries are trying to reopen with many infectious people around.

Moreover, lockdowns failed to stop the exponential growth of cases and deaths in countries such as India, Russia, Argentina, Chile, Mexico, Peru, the United Arab Emirates, Saudi Arabia, Qatar, Oman, South Africa, and Djibouti. These countries are now between a rock and a hard place: they cannot reopen safely, but they cannot sustain lockdowns for much longer.

Beyond their varying epidemiological effectiveness, lockdowns have been economically devastating. The wreckage in advanced economies is bad enough: the UK is facing its worst recession since 1706, and 36 million Americans have claimed unemployment compensation since March. Now add to that the fact that 25% of workers in Lima, Peru, have lost their jobs, but cannot rely on their government for help because it cannot borrow at the scale of the US and the UK. Emerging and developing economies around the world will shrink by 20-40% in the second quarter, with double-digit contractions for the year. They and the international organizations fear announcing such projections because they may spook markets and make matters worse.

More bad news: the post-lockdown period will not be one of strong recovery, because economic activity will remain severely constrained by the need to contain COVID-19. For example, truck drivers coming from neighboring countries caused outbreaks in countries like Jordan and Namibia, which had been highly successful at suppressing COVID-19, prompting a further tightening of controls.

Travel and tourism will not recover at least until a vaccine is widely available. Companies now realize that operating under social-distancing protocols is harder than they expected. Capital has been flowing out of emerging markets, and credit rating agencies are on an unprecedented downgrade spree.

As a result, most emerging and developing economies will have financial needs that will be hard to meet. First and foremost, they need money just to fund huge collapses in tax revenues caused by the shrinking economy. In addition, they will be asked to help hospitals, households, and firms, just as in advanced countries.

They will not find the needed finance domestically, because everybody at home is hurting. It must come from abroad. In the past, smaller shocks have led to triple whammies: currency, debt, and banking crises. Recovery has taken not a year but a decade.

All this adds up to the worst financial crisis that the Bretton Woods institutions have ever experienced in their 76-year history. Their response so far has been both admirably fast and utterly inadequate. They wish they could do more, but the existing rules and funding parameters are inadequate to the task.

For example, the International Monetary Fund has been giving countries Rapid Financing Instrument loans equivalent to 100% of quota – a formula-determined number that typically adds up to less than 1% of a country's GDP. If the number was 800% of quota, and this amount was disbursed in the next 18 months, it would start to make a difference.

The World Bank has a woefully insufficient balance sheet, and the regional development banks even more so. They should be recapitalized rapidly, but this is unlikely to happen, because the development banks have become another area of US-China rivalry.

In addition, as I argued earlier, the US Federal Reserve and the European Central Bank should include emerging-market bonds in their asset-purchase programs. Mauricio Cárdenas, Colombia’s former finance minister, has proposed a plan that should make this more palatable by pooling credit risk.

Moreover, this crisis is bound to require many countries to restructure their pre-pandemic debt to bring claims on future income in line with unexpectedly worsened expectations. Harvard’s Carmen M. Reinhart – recently appointed as Vice President and Chief Economist of the World Bank – and co-authors have documented how long and cumbersome restructurings have been in the past. This may have been made intentional, to dissuade borrowers from abusing the option to restructure. The world now would be better served by a more efficient and expedited mechanism, such as the Sovereign Debt Restructuring Mechanism that Anne O. Krueger, then the IMF’s first deputy managing director, proposed in the early 2000s, before the US Treasury quashed the plan.

For humanity, this is a “whatever it takes” moment. To treat it as a “whatever makes us look good enough” moment would be a Category 5 mistake.