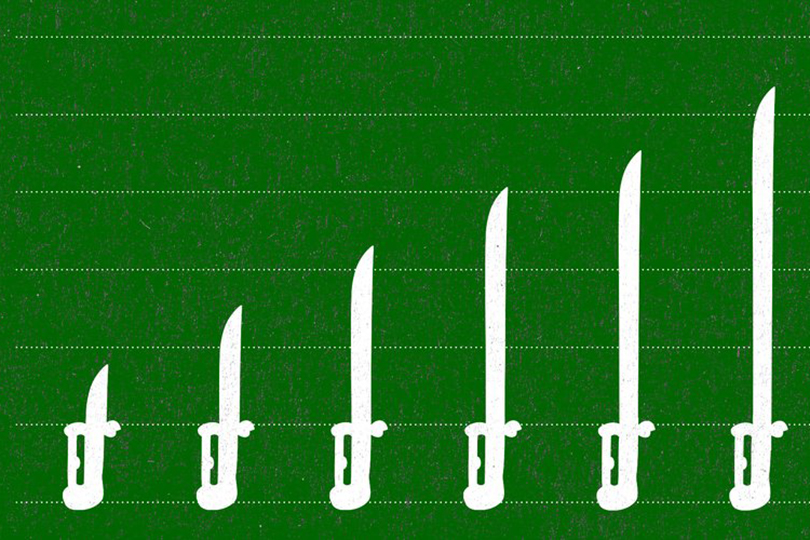 For autocratic regimes, increasing taxes could put their survival at risk.

Iconic images from the 1970s show long lines at gas stations across the United States—a group of Arab nations had imposed an oil embargo on the U.S. for supporting Israel during the 1973 Arab-Israeli War. The price of oil nearly quadrupled, causing gas shortages that hit Americans badly, while leaving countries such as Saudi Arabia so rich that they dismantled their tax bureaucracies. In the following decades, Saudi citizens paid virtually no taxes.

That is until two years ago, when Riyadh—along with other neighboring oil autocracies—imposed a new value-added tax of 5 percent on most goods and services. No one really likes paying taxes, let alone people who have never paid them, and many of those countries’ citizens complained that it imposed an unnecessary financial burden. But those governments were in a bind: Global demand for oil had been declining, and they needed to diversify their economies beyond the energy sector.

Since then, thanks to an economic crisis brought on by the coronavirus outbreak, oil demand has fallen further still, with prices at one point even going into negative territory by one measure. Facing worsening budget deficits, the Saudi government has decided to reduce spending and triple the tax it first imposed in 2018. (Neighboring states such as the United Arab Emirates have so far made no plans to increase their own taxes.) But Saudi Arabia isn’t alone in scrambling to find a solution to the consequences of the pandemic. Around the world, countries are proposing new taxes or expanding social safety nets to try to mitigate the worst of the financial strain on citizens. Yet while officials hope that many of these measures are temporary—and seem to have only a short-term recovery in mind—they could, in the long run, fundamentally transform people’s expectations of their government, potentially unleashing major geopolitical shifts in the decades to come.

In Saudi Arabia’s case, the new tax rate and austerity measures are a seemingly appropriate response for a country that almost exclusively relies on a single sector to fund its government. The kingdom’s de facto ruler, Crown Prince Mohammed bin Salman, has for years spoken of opening up his country to greater international and private investment and diversifying its economy, as well as promoting a more secular image to the outside world. (Those efforts were hindered when foreign investors pulled out after the killing of the U.S.-based Saudi journalist Jamal Khashoggi.)

But the Saudi government—a highly autocratic regime—has historically resisted taxing its citizens for a reason: Taxes empower people to demand more from their government, and they can often be a trigger for democratization. “Taxation plays a profound role in the rise of democracy,” Sven Steinmo, a political-science professor at the University of Colorado at Boulder, told me.

Taxes have effectively existed since governments have—the former being necessary to fund the latter. Yet tax regimes like Saudi Arabia’s are relatively new and uncommon, says Wolfgang Schön, a director at the Max Planck Institute for Tax Law and Public Finance. With profits from natural resources, Saudi Arabia and other Gulf countries have been able to build big governments with sizable social-welfare funds largely without asking their citizens to pay. But when “taxes are levied without any direct benefit for the citizen,” Schön told me, “the people will request an equal burden-sharing and budgetary discipline, even in nondemocratic countries.”

Indeed, world history is littered with examples of unpopular tax regimes leading to political upheaval. The American Revolution was preceded by the famous rallying cry “No taxation without representation.” The French Revolution was in part driven by a regressive tax system that, coupled with widening economic inequality, caused fierce resentment of the aristocracy. Even the Magna Carta—a bedrock document in the development of Western democracy—was agreed to by England’s King John after people rebelled against wars and taxes.

Sometimes it’s not what we typically think of as taxes that cause uprisings. When long-standing subsidies—effectively negative taxes—are removed, prices increase. That, on its own, is enough to provoke powerful revolts. When Myanmar (also known as Burma) stopped subsidizing fuel in 2007, for example, it sparked the Saffron Revolution. Sudan curbed subsidies of wheat and fuel in 2018, which sent bread prices up and helped trigger a protest movement that eventually unseated its dictator, Omar al-Bashir.

Of course, tax-related revolts don’t always lead to democracy: Although activists in Myanmar probably did contribute to that country opening up years later, they did not fully democratize the state. Even Indonesia, which saw a similar but more successful outcome when the government increased the price of gas in 1998, continues to struggle in democratic rankings in spite of now holding free and fair elections.

Direct taxes may have a different effect: Whereas lifting subsidies may set off uproar, positive taxes, especially when they’re permanent, become an ambient reminder for citizens that they should have a say in how they’re governed. And while Saudi Arabia’s new tax plan will probably not trigger a chain of events that leads to democracy in the Arabian Peninsula, it could still have a major political impact. When citizens pay taxes, Jim Krane, an expert on the geopolitics of energy at Rice University’s Baker Institute told me, they tend to have a keen interest in influencing—or even determining—how that money is spent. “It encourages participation,” he said, “and so it limits the autonomy of government.”

That’s because taxes make a government accountable to those who pay them. Democracy is often viewed as the most direct way for citizens to let their representatives know whether or not they approve of their government. But democracy is not the only form of accountable governance. “A regime can attempt to respond to the interests and demands of its citizens even if it doesn’t have formal democratic institutions, because they’re aware that if they get too far out of touch with what the citizens want, they’ve got a problem on their hands,” said Steinmo, who is also the author of Taxation and Democracy. “So it’s better for [those governments] to give small concessions.” China offers a case in point: Though deeply autocratic, Beijing must still consider public sentiment to some extent, offering its people increased economic mobility and improving standards of living. “China has a little bit of a different social contract, where the state stays in power based on its management of the economy,” Krane said

The social contract in Saudi Arabia included a one-way flow of money, from the government to the people, up until two years ago. Since that changed in a relatively short period of time, it’s unclear how the new taxes will impact the relationship between Saudi citizens and their government. Concessions could come in the form of expanding social freedoms, as the kingdom has already been doing at a creeping pace, including with allowing women to drive and run for seats on local councils.

Ultimately, as Saudi Arabia and other countries deal not just with a global-health crisis and the accompanying economic collapse but also with the constraints of their own economies, many of their actions—such as tax hikes and austerity measures—will have ramifications, intentional and otherwise, in the decades to come. When a government tinkers with its social contract without citizen input, and asks for more money from its people, there could very well be rumblings of resistance or revolt.

In the West, concern has focused on a plunge into populist authoritarianism. But a rise in democratization, or at least in social freedoms, might be occurring elsewhere—especially in areas where people feel the empowering spell of taxation.