Could the Iranian Economy Sink Rouhani? 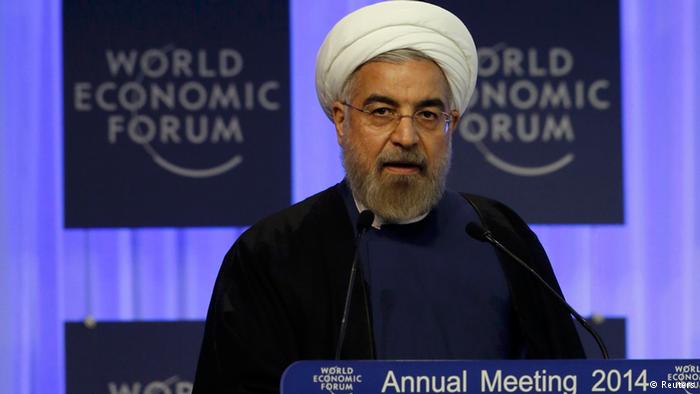 Iranian President Hassan Rouhani is expected to win re-election this May, because he has generally done what he said he would do, and because every president of the Islamic Republic before him has served two terms. But if he loses, he can blame his harsh economic policies, which delivered too little, too late.

For a “managed democracy,” Iran holds remarkably unpredictable presidential elections. And the upcoming election on May 19 is no exception, given that the incumbent, Hassan Rouhani, is facing a tough conservative challenger.

Rouhani’s opponent, Ebrahim Raisi, is ahigh-ranking cleric who is considered to be a possible successor to Iran’sSupreme Leader, Ayatollah Ali Khamenei. Raisi’s campaign has received a boostfollowing the withdrawal of another hardliner, Mohammad Bagher Qalibaf, the mayorof Tehran, who garnered one-third as many votes as Rouhani in the 2013 election.

When Rouhani was elected in 2013, Iran was suffering from 35% inflation, the national currency had depreciated by two-thirds in the previous year, and international sanctions were crippling the economy. Oil exports and output of automobiles – Iran’s leading manufacturing industry – had each declined by two-thirds, and restless industrial workers were demanding back pay.

Rouhani had campaigned against former President Mahmoud Ahmadinejad’s populist policies, promising to put jobs and production before redistribution. He said that he would control inflation, negotiate a deal with the West to end the sanctions, and restore macroeconomic stability.

By any reasonable standard, he delivered: inflation is in the single digits for the first time in three decades; sanctions have been lifted in accordance with the 2015 nuclear deal; and the exchange rate has been stable for four years. But, unfortunately for Rouhani, many Iranians who had expected their living standards and employment prospects to improve as a result of these successes are now feeling disappointed.

To be sure, the economy has started to grow again, after contracting for two years. But there is disagreement about the current recovery’s breadth and durability. Because much of the recent growth has come from a doubling in oil production, it has not increased most household incomes, or created new employment opportunities. Thus, International Monetary Fund monitors who visit Iran twice a year have projected 6.6% growth for the 2016-2017 fiscal year, but only half that for the 2017-2018 fiscal year.

Survey data show that, outside of Tehran, average real (inflation-adjusted) household expenditures fell during the first two years of Rouhani’s term, while poverty rose. In the 2015-2016 fiscal year, there were almost one million more people below the poverty line than when Rouhani took office.

And yet these outcomes do not necessarily amount to broken promises. When voters rallied behind Rouhani’s call for lower inflation, they may not have realized that prices rising at a slower rate would also mean slower income growth. And the lay public was not alone: even one of Rouhani’s economic advisers initially boasted that people were 20% better off because the rate of inflation had declined by 20 percentage points.

Moreover, Rouhani has pursued a tight fiscal policy that deepened the recession and delayed the recovery. He has kept the government’s rate of fixed investment at around 5% of GDP, which is twice what it was under Ahmadinejad, but still too low. Government fixed investment is the traditional driver of economic growth in Iran, and has been as high as 20% of GDP in good times.

Making matters worse, Iran has a major investment bottleneck, owing to collapsing real-estate values and a frozen banking system. Iran’s banks are still saddled with bad loans forced on them by Ahmadinejad to finance his populist projects. And the Central Bank of Iran has failed to get credit flowing again, even though it has been pumping money into the economy and increasing liquidity by 26% per year.

As a result, real interest rates have risen to above 10%, choking off private investment. With the state unwilling to spend, and the private sector unable to borrow, total investment fell by 9% in the first nine months of the 2016-2017 fiscal year, after falling by 17% during the same period the previous year.

Despite renewed economic growth, unemployment actually increased in the last four years. Although the economy created more than a half-million jobs each year, new entrants to the labor force pushed up the unemployment rate, from 10.1% to 12.1% – and from 24% to 29% for workers aged 15-24.

Khamenei has led the charge against Rouhani’s record on jobs. In a speech in March marking the Iranian new year, he called for a year of “production and employment,” and urged the next president to create jobs with local resources, rather than look for assistance abroad.

Rouhani’s economic strategy has clearly failed younger Iranians, who account for 60% of the unemployed, and who generally favored him in the 2013 election. But Iran’s youth will likely overlook Rouhani’s economic-policy shortcomings, and vote for him again, because they prefer his more relaxed social-policy positions to his conservative rival's stern moralizing.

Older Iranians, however, might not be so forgiving. Youth unemployment affects everyone, but particularly the adults who must house and feed the jobless. According to 2015-2016 survey data, of the 65% of men under the age of 35 who lived with their parents, 85% were single, and 24% were unemployed. Marriage and employment are the two defining elements of adult life in Iran. Without them, many young people have turned to crime and drugs, which has had far-reaching adverse effects.

Rouhani has also hiked energy prices by 50%, without increasing cash transfers to the poor. We do not know the extent to which the poor supported Rouhani in 2013; but they are less likely to do so this time. Rouhani severely criticized Ahmadinejad’s cash-transfer policy, which was designed to compensate for lost bread and energy subsidies. But even if Ahmadinejad’s overzealous attempt to deliver “the oil money to peoples’ dinner tables” added to inflationary pressures, it also seems to have reduced poverty and inequality significantly.

Still, Rouhani is expected to win re-election, not least because every president of the Islamic Republic has served two terms. But if he loses, his economic policies – which delivered too little, too late – will be to blame.

* Djavad Salehi-Isfahani is Professor of Economics at Virginia Tech, Senior Fellow for Global Economy and Development at the Brookings Institution, and a research fellow at the Economic Research Forum (ERF) in Cairo.