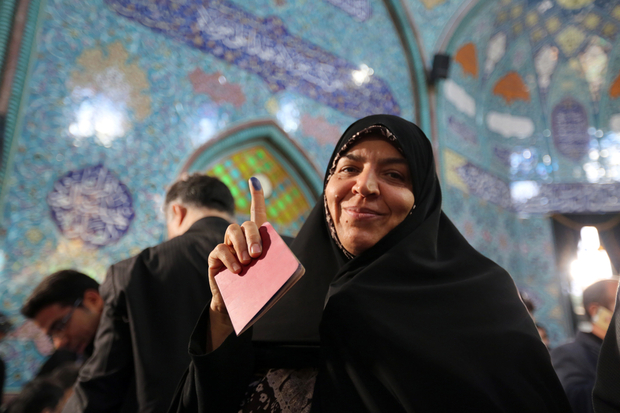 Iranians were voting across the country on Friday in elections billed by the moderate president as vital to curbing conservative dominance in parliament and speeding up domestic reforms after a nuclear deal with world powers.

About 55 million people are eligible to cast ballots that will ultimately elect 290 parliamentarians in what will probably be just the first round of parliamentary elections.

Voting in Irans elections required extra time on Friday to allow millions of latecomers to cast ballots in what is a crucial test for moderate President Hassan Rouhanis administration.

As well as picking 290 members of parliament, voters were also selecting the Assembly of Experts, a powerful committee of 88 clerics that monitors the work of the countrys supreme leader Ayatollah Ali Khamenei and may choose his successor.

A good result for a pro-Rouhani alliance with reformists called The List of Hope could help him curb conservative dominance in parliament and create an opening for domestic reforms.

But it was also a chance for the electorate to issue a rebuke just one month after sanctions were lifted under a nuclear deal between the government and world powers, meaning the outcome will be seen as a de-facto referendum on the president.

Polls closed at 10pm except in Tehran after repeated extensions had been announced to deal with queues outside polling stations.

The late finish means initial results from provinces and small cities will not come until Saturday, but in Tehran, which with some 5.5 million voters is electing 30 MPs, the outcome may take until Tuesday.

Contenders need 25 percent approval to enter parliament and, even after a last-minute withdrawal of over 1,300 candidates this week, there are still 17 hopefuls competing for every seat.

Iranians are also casting votes in a second and potentially more significant election to select the Assembly of Experts, a powerful committee of 88 clerics that monitors the work of Supreme Leader Ayatollah Ali Khamenei.

While MPs are elected for four years, the assembly will be granted an eight-year term. Should Khamenei, who is 76, die during that time its members would pick his successor.

Voting started at 8am (0430 GMT) and will close at 6pm although officials said polling stations could stay open if there are queues and voters needed more time to cast their ballots.

By early afternoon there were reports of lengthening queues stretching from polling stations in Tehran.

Supreme Leader Khamenei cast his vote early on Friday morning in a televised ceremony and urged everyone to do so quickly, as its both a duty and a right.

Everyone must vote, those who love Iran, those who like the Islamic Republic, those who love the grandeur and glory of Iran, he told a state television reporter after casting his vote. We have enemies. Elections should be such that make the enemy disappointed. We must vote with insight and open eyes.

Mohammad Khatami, a former president and reformist figurehead, was cheered as he voted in Tehran, with crowds chanting: Viva Khatami! Viva reformists!

As Irans ultimate authority, Khameneis powers outrank those of Rouhani, but the president is looking for gains in parliament to allow him to build on the nuclear deal by bringing improvements at home.

The economy has featured strongly during the election campaign as Iran faces a stubborn challenge to overcome the damage that almost a decade of sanctions caused.

The elections will also be a crucial indicator of the future direction Iranians want for their country.

I want to vote for those who care about people and country’s economy, and I think the reformists have had better performance, Masoud, a 28-year-old store owner, told Middle East Eye near a polling station on Tehrans Pasdaran Street.

Im determined to vote for moderates and have done my best to persuade others to vote for them, he said.

I expect the situation of the country to improve through reforms, said Atefeh Yousefi, 38, also in line at a polling station in the capital, adding that she regretted boycotting elections in the past.

But Saed Loresatni, a 29-year-old estate agent, said: I voted for the conservatives because they have resisted against the excessive demands of the US and other arrogant powers. The conservatives are the winners.

Voters in other cities told MEE that turnout appeared to be strong.

Ive visited a few polling stations and it seems that people are voting in favour of reformists and moderates, said Mohsen Dastury, a 29-year-old student in the eastern city of Mashahad.

Asghar Farahani, 37, a journalist in Ilam in western Iran, said he believed a majority of people there would support reformists and moderates, but said the reformists had been unable to field a candidate in the city for the assembly.

Message to the world

Raed Seydie, a 34-year-old lawyer, said the elections sent a message to the world that Iranians were free to vote for whomever they wanted, and that there was democracy in Iran, citing the participation of Mehdi Karroubi, a leader of the reformist Green Movement who alleged that vote rigging had occurred in presidential elections in 2009.

Mehdi Karroubi and those who accused the Islamic Republic of ballot rigging have also taken part [and] this is proof of my words about democracy in Iran. I should add that the extensive presence of people signals their loyalty to their country.

Mir-Hossein Mousavi, the reformist presidential candidate in 2009, and his wife, who have both been under house arrest since 2011, were also able to vote.

Rouhani has played up the potential for foreign investment which he says will bring jobs, particularly for Irans youth whose unemployment rate of 25 percent is two-and-a-half times the national average.

However, conservatives say strong economic growth will only be possible if an emphasis is placed on domestic production under a resistance economy model more in tune with the ideals of Irans 1979 Islamic revolution.

Although he returned the economy to growth after inheriting a recession, the president remains vulnerable as the benefits of sanctions relief and a return of international business will take time.

If voters support the pro-Rouhani list, a coalition of moderate and reformist candidates, the president could swing the balance of power in parliament, creating an opening for social and political reforms on which he has so far been blocked by parliamentarians.

But a one-week official campaign for the parliamentary election has been largely overshadowed by controversies over who was allowed to run for office.

Thousands of candidates were excluded, with reformists complaining that many of their most prominent figuresa had been barred, leaving them with untested hopefuls.

A total of 4,844 candidates are standing in the parliamentary election. Only 159 clerics - a fifth of the applicants - are seeking a place on the Assembly of Experts.

On Wednesday, Rouhani sent a text message urging people to vote, saying participation was needed to build the future of the country with plenty of hope, echoing the campaign message of his allies.

The main conservative faction is headed by Gholam-Ali Hadad Adel, a former parliament speaker, whose daughter is married to one of Supreme Leader Khameneis sons.

Results from outside Tehran are expected within 24 hours but the vote tally in the capital, which has a population of 12 million and is electing 30 parliamentarians, will take three days.