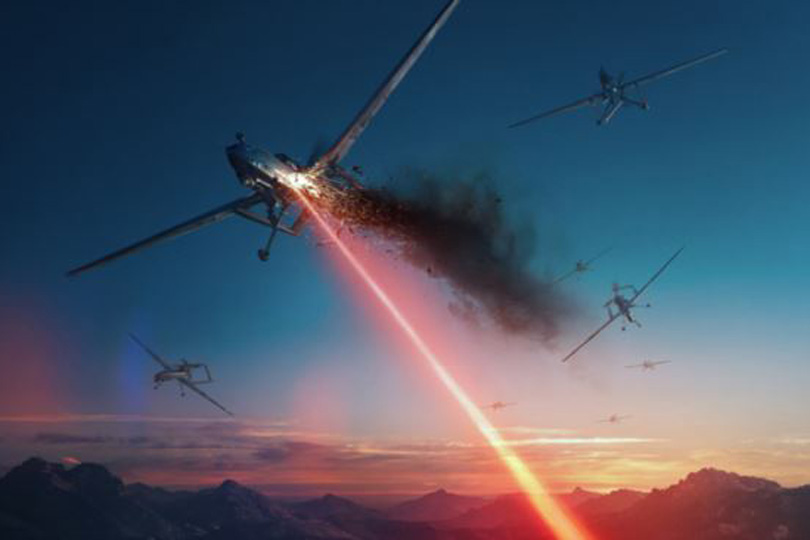 A laser battle weapon is no longer science fiction. It is deployed, operational, and on board the USS Ponce amphibious transport ship in the Arabian Gulf.

A few days ago American journalists were able to see a demonstration of the laser destroying a drone. In an instant, the drone's wing lit up, heated to a temperature of thousands of degrees, lethally damaging the aircraft and sending it hurtling down to the sea. The strike was silent and invisible.

“It is more precise than a bullet,” ship’s captain Wells told CNN.

The Laser Weapons System (LaWS) begins with an advantage. It moves, by definition, at the speed of light. For comparison, that is 50,000 times the speed of an incoming ICBM.

The cost per use? "It's about a dollar a shot," said Hughes.

This ship borne weapons is designed to stop inexpensive drones or missiles made by any hostile entity.

However, in the world of laser weapons systems, the Navy’s LaWS is just the beginning. There are lasers being tested that can target ballistic missiles in their terminal phase, attack battlefield weapons from aircraft, and even hit ballistic missiles or satellites in space.

It’s not just the US. China has introduced a battlefield laser called “Silent Hunter.” The Silent Hunter laser is powerful enough to cut through light vehicle armor at up to a kilometer away.

Israel is also interested in fielding a laser anti-missile system called Iron Beam. Although very little has been released about Iron Beam, Rafael’s research into laser weapons has been well documented. The Iron Beam appears to be a derivative of the Tactical High Energy Laser (THEL) that was developed by the US and Israel.

The design aim of the THEL system was to provide a point defense weapon which was capable of engaging and destroying short range rockets like Katyushas, artillery shells, mortar rounds and low flying aircraft.

One reason the laser has become more practical is a new fiber optics system that provides more power without the toxic chemicals of chemical lasers.

Since the exhaust of this laser is hazardous to humans, a complex exhaust system must be used to absorb and neutralize the highly corrosive and toxic deuterium fluoride exhaust gas.

However, traditional lasers didn’t have the potential of chemical lasers because they generated too much heat during operation.

That has changed. Researchers have made rapid advances in laser weapons.

According to Bob Ruszkowski, of Lockheed's secretive Skunk Works facility, new technologies are solving these problems. “The technology is getting real. It's the dawn of a new era where the tech can be made smaller and powerful enough to be put on vehicles, ships and aircraft.”

“We're really on the cusp of seeing the introduction of lasers in future systems,” he said.

The weapon tested at White Sands is about to double in power with a 60-kilowatt laser the Army plans to test in the next 18 months,” he said in a phone interview May 12.

The laser generates its beam through fiber optic cables like those used by telecom companies, said Robert Afzal, a senior fellow for laser and sensor systems at Lockheed.

“We demonstrated that we could combine large number of these fiber lasers and link them to a weapons system,” he said.

That's important for the platforms that carry them, he said. It means they don't need a large generator or cooling system and that high-powered lasers can be easily transported.

“This was the key puzzle piece that needed to be solved before we could begin to deploy these laser weapons,” Afzal said. Today, battlefield lasers can fit into a semitrailer or even be deployed on a C-130 transport aircraft.

In 2015, contractors showed that laser weapon system mounted on a C-130 could burn a hole through a truck's hood at a range of one mile.

“It was the most efficient high-powered laser ever demonstrated,” Afazal said of the test, which was designed to show what a laser could do if fired at a vehicle from an aircraft.

Afazal said. “Something like that can be easily integrated into an AC-130 gunship.”

There are still some problems that are limiting the use of lasers in other applications.

One of those problems is “blooming,” the phenomena caused by the high energy laser interacting with the atmosphere. This causes thelaser to spread out and disperse energy into the surrounding air. The best way to counteract this is with a very short burst of laser energy that destroys the target before the blooming starts. However, these shorter bursts limit the damage that the laser can do to a larger target.

The laser beam can also be absorbed, either by dust, water vapor, clouds, fog, snow, or rain. Since these limit the range, high energy lasers are only effective in clear weather as a terminal defense system, protecting a small area around the missile site.

One way to avoid this problem is to mount the laser on a satellite and then target the ballistic missile during the mid-flight phase, when it is outside the atmosphere. However, this requires a smaller laser system and a more portable power supply that can be launched.

Another problem that must be overcome is tracking. Laser tracking systems must be able to account for the movement of the vehicle it is in, and the target. The targeting system must account for the power of the laser, the time the laser must remain on target in order to “burn” a hole through the target, and the blooming caused by hot air. While inexpensive drones can be easily be defeated by the current ship-borne laser, “harder” targets like scud missiles and armored vehicles pose a much bigger challenge.

Another challenge is programming the laser to target the most vulnerable parts of missiles or vehicles. In the mid or terminal phase of a scud missile flight, a hit on the lower part of the missile, where the engine is, will not be as damaging as a hit on the warhead because the engine has been shut down. Even a hit on the guidance system, which shuts down with the engine, will not cause as much damage.

A satellite borne laser must be able to target the warhead, where heat can damage it or cause a premature explosion. Or, it can damage the missile skin enough so it may tumble out of control and breakup during reentry.

However, the most interesting application is as a battlefield weapons that can be mounted on an aircraft. Although it wouldn’t be able to destroy heavily armored vehicles, it can target lighter skinned vehicles like communications, logistics, and command vehicles.

A battlefield laser would also be capable of seriously degrading heavy armored vehicles by hitting targeting and optical gear on the outside of a tank (international agreements preclude the use of lasers to blind troops). It could also “burn” radio antenna and even weapons warheads of munitions like the TOW missile mounted out the vehicle’s exterior.

But lasers do have their weaknesses. Although proponents of laser weapons brag that lasers don’t have ammunition, they do require fuel to power the laser. And, fuels contain less energy per pound than most high explosives. That means that pound-for-pound, conventional explosives will do more damage than the same weight of fuel used in a laser.

Or to look at it in another way, a couple pounds of plastic explosive in a shaped charge will do more damage to an armored vehicle than the most advanced fiber optic laser in the same time frame.

And, as we noted earlier, lasers – unlike high explosives - are subject to the weather. That prevents the laser from becoming an “all weather” weapon on the battlefield in the near future.

In the end, the real future of the laser lies where there is no weather to hinder it – space. There, the lack of atmosphere and the distances will make the laser the preferred weapon of outer space.