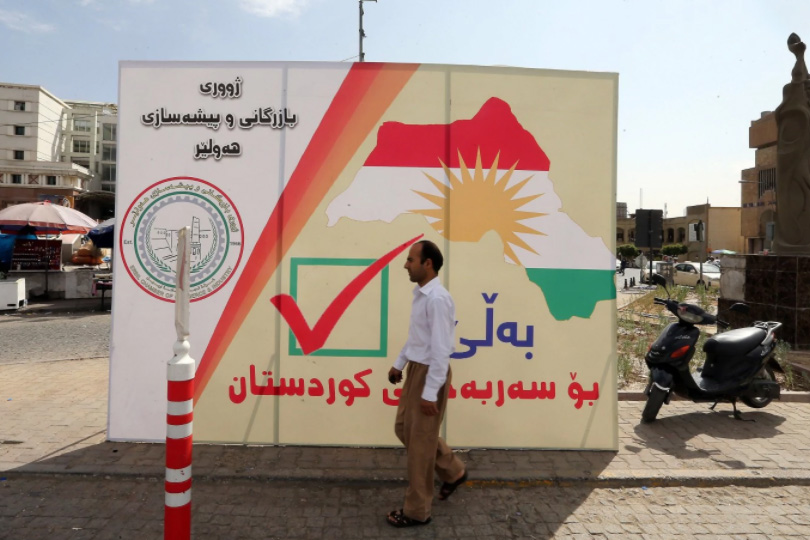 Iran blocked flights to and from the neighboring Iraqi region of Kurdistan on Sunday while holding military exercises on the border, the sharpest signals yet of its opposition to a Kurdish referendum on independence from Iraq planned for Monday.

Tehran’s extraordinary move to close its airspace came at the request of the Iraqi central government, Iranian media reported, and represents the kind of economic pressure Kurdish leaders can expect as they push ahead with a vote against the wishes of Baghdad and prominent members of the international community.

Officials of the semiautonomous Kurdistan Regional Government in northern Iraq have remained undeterred by the opposition from Baghdad, as well as neighboring Turkey and Iran, in addition to allies such as the United States and the European Union.

Iran’s military drills followed similar exercises by Turkey’s armed forces last week. Turkey, which is battling Kurdish insurgents on its soil, has called the referendum a threat to its national security.

International tensions and isolation did not dampen the festive mood in the Kurdish capital, Irbil, which has been awash with the colors of the Kurdish flag and has hosted massive rallies in support of independence. Cars have been adorned with pictures of Masoud Barzani, the Kurdistan region’s president and the leader of the independence push.

Barzani on Sunday sought to temper Kurdish expectations while reassuring international allies that the referendum is not designed “to draw the borders of Kurdistan” but to usher in serious talks with Baghdad on how to implement policies that would make them “good neighbors.”

“We are ready to give this as much time as needed,” he said at a news conference. “One year, two years or even longer in the hopes of becoming two good neighbors.”

During a competing speech that was televised live, Iraqi Prime Minister Haider al-Abadi angrily reiterated that the results of the referendum will not be recognized by his government and urged Kurds to question their leader’s motives, suggesting that the vote is a ploy to distract from their economic hardships and the bickering among Kurdish parties.

“We will do whatever is necessary to protect the unity of Iraq,” said Abadi, who has vowed to use force if unrest breaks out in disputed areas as a result of the referendum.

Hours after his speech, Abadi’s government issued an order that the Kurdish regional government hand over all airports and borders to the federal government and asked foreign countries to deal only with Baghdad on all transactions, including oil sales. The regional government independently exports about 600,000 barrels of oil a day, which has been a key point of conflict between the two governments. There was no response from Kurdish authorities to Baghdad’s order as of late Sunday.

If the vote is carried out, it will almost certainly result in economic sanctions from the Baghdad government and the threat of armed conflict. But Kurdish voters remain steadfast, saying the opposition to the referendum is serving only to strengthen their belief in their cause. They say they are prepared for any consequences, steeled by a history of oppression that has not broken them or blunted their desire for self-determination.

“Of course there might be some security and economic implications,” said Kovan Tahseen, a 30-year-old university lecturer in Irbil. “We can survive those. We have survived worse.”

On Sunday, officials from Kurdistan’s main parties agreed to hold the referendum in Kirkuk, an oil-rich city that is claimed by both the Kurdistan regional government and Iraq’s central government. Sporadic clashes stemming from the independence vote have occurred in the city.

Kirkuk has been at the heart of the debate over the referendum. The city is legally under the authority of the central government, but Kurdish forces have controlled it since 2014, when Iraq’s security forces abandoned Kirkuk in the face of an Islamic State onslaught. Many Kurds regard the city as their cultural capital and see it as a centerpiece of a century-long struggle for autonomy.

Since 1991, Kurds in Iraq have administered their territory — spread over three provinces in the north of the country — after the United States intervened in a campaign by dictator Saddam Hussein to crush Kurdish uprisings.

After the 2003 U.S.-led invasion of Iraq, Kurdish rule over their region was formally recognized by the Iraqi government, and a revenue-sharing deal to help finance Kurdish security forces was reached. But since 2014, Baghdad has cut off payments in protest of Kurdish peshmerga forces taking Kirkuk and the Kurdish regional government independently exporting oil from there. Despite unprecedented military cooperation between the two sides in expelling the Islamic State militant group from northern Iraq, the political impasse grew worse.

Iran and Turkey have said that any threat to Iraq’s unity is unacceptable. They are also worried that the referendum in Iraq will stoke the independence aspirations of their own sizable Kurdish populations.

But Kurds in Iraq say they are less concerned with international opposition than with their own prosperity, which they see as hampered by being part of the Iraqi state.

“People are exhausted,” said Goran Azad, 27, a salesman in Kirkuk. “Since I’ve been born, it’s been nothing but war. If this referendum will eventually lead to stability, I’m all for it.”

Azad said he is uniquely positioned to understand the anxieties of non-Kurds in Iraq over the vote and the prospect of an independent Kurdish state. His father is Kurdish and his mother is Turkic, one of the ethnic minorities that have a large presence in Kirkuk. And he is married to an Arab woman.