Anti-regime protests in Iran erupt across the country 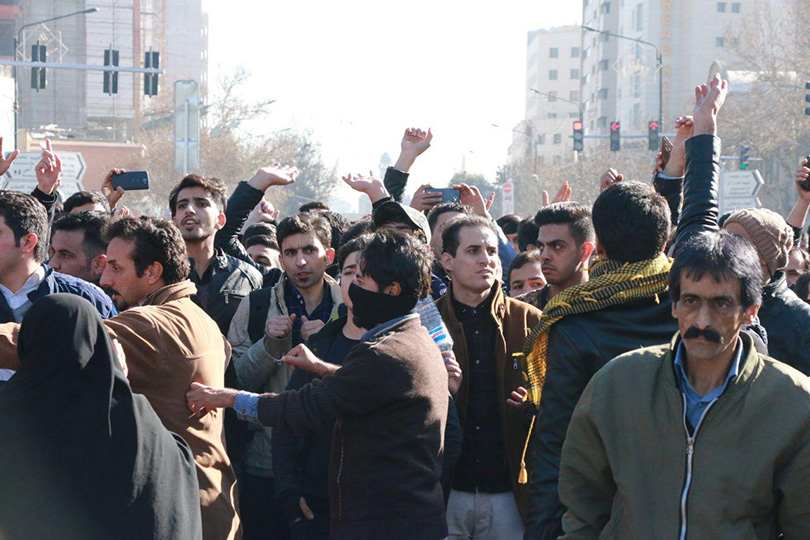 Anti-government protests have erupted in cities across Iran, including the capital, Tehran, with reports of arrests as riot police were deployed to disperse the demonstrations.

BBC Persian reported that protests, which decried deteriorating economic conditions and corruption in the Islamic Republic, also were held in the cities of Isfahan, Kermanshah, Rasht, Qom, Sari and Hamedan.

In Kermanshah, where the largest demonstrations took place on the second day, protesters shouted slogans against Iranian leader Ayatollah Khamenei, and in other cities they shouted “death to the dictator” and called for an end to ongoing Iranian involvement in regional conflicts in Iraq and Syria.

Police fired tear gas and used water cannons to break up the large-scale protests in Kermanshah’s Azadi Square, descending on the gathered crowds with batons and riot shields. The BBC reported arrests had been witnessed but did not give specific numbers.

Kermanshah, in northwestern Iran, was rocked by deadly earthquakes last month that killed 600. The widespread death and destruction in the area close to the country’s western frontier with Iraq has been blamed on poor building regulation, particularly in public housing projects.

Iran’s strictly controlled state media reported a total of 300 demonstrators gathered in the city, characterizing the protests a “call by the anti-revolution.” The country’s semiofficial FARS news agency, cited by Reuters, reported that some public property was destroyed in the demonstrations.

Protests spread Friday following demonstrations in Iran’s second-largest city of Mashhad Thursday, where at least 52 people were arrested. Videos uploaded to social media showed the demonstrators shouting, “The people are begging, the clerics act like God.”

The protests appear to have been sparked by price hikes and the perceived inability of the government to control the economy. The BBC reported that the price of eggs doubled in a week's time.

The country’s president, Hassan Rouhani, has staked his personal political capital on improving the Iranian economy. The landmark 2015 nuclear deal he signed with the U.S. and other world powers ended punishing sanctions on Tehran in exchange for Iran giving up its ambitions for a nuclear weapon.

While the economy has come out of recession and inflation has fallen, many businesses continue to struggle as a result of the lack of investment. The official unemployment rate stands at 12.4 percent.