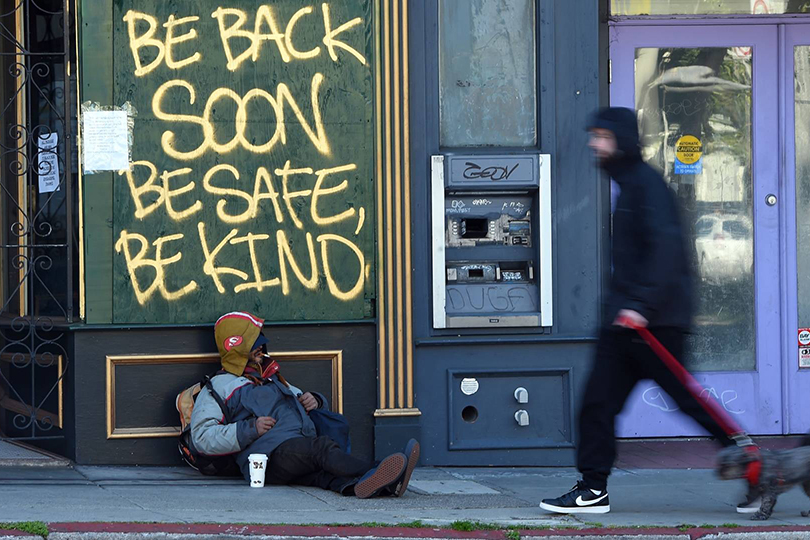 The COVID-19 outbreak ravaging the United States is exacerbating the nation’s class divide, closing small businesses and bankrupting households while many in the nation’s elite emerge relatively unscathed.

The disparity was highlighted in April when stock markets enjoyed a banner month even as 22 million people were added to the unemployment rolls.

It is a divide that has political ramifications for both parties, but especially so for Republicans, who hold the White House and the Senate majority.

Senate Republicans took the lead in drafting the $2.2 trillion CARES Act, which included a $349 billion loan program for small businesses — later bumped up to $669 billion.

That initiative has come under fire for giving loans to well-connected companies such as the NBA’s Los Angeles Lakers, as well as chain restaurants such as Shake Shack. These companies have since returned loans, but the program received a black eye.

Ashford Inc., a hotel conglomerate run by Monty Bennett, a major donor to President Trump, and its subsidiaries have received between $58 million and $70 million in small-business loans, according to news reports.

Corporate giants also have benefited from the Treasury Department’s and Federal Reserve’s credit lending facility, which was bolstered by a $500 billion appropriation in the CARES Act. This has helped corporations such as Boeing secure billions of dollars in credit. Tech giants such as Amazon, Google, Facebook and Netflix are seeing parts of their businesses soar during the pandemic, and their stock prices also were bolstered by the government’s intervention in the economy.

The disease itself has hit poor and minority communities disproportionately. One study showed 80 percent of hospitalized coronavirus patients in Georgia were black.

Darrell West, director of governance studies at the Brookings Institution, said the last time a national crisis so highlighted wealth disparities in the United States was the Great Depression, when unemployment hit a peak of 24.9 percent.

GOP senators, conscious of the political risks as their party battles to retain its Senate majority, have criticized the Paycheck Protection Program (PPP) in the CARES Act for approving loans to big businesses.

Treasury Secretary Steve Mnuchin last week said it was “outrageous” the Lakers, a franchise estimated to be worth $4.4 billion, received a $4.6 million loan, which it has pledged to return.

Sen. Rick Scott (R-Fla.) said “millions of dollars are being wasted” because of loopholes in the PPP. Senate Small Business Committee Chairman Marco Rubio (R-Fla.) threatened to use subpoenas to crack down on corporate abusers. Rubio complained on Saturday that the Small Business Administration “has refused to provide up to date information with us on round two” of PPP loans.

In another sign that neither party wants to be seen as receiving special treatment, Speaker Nancy Pelosi (D-Calif.) and Senate Majority Leader Mitch McConnell (R-Ky.) issued a joint statement on Saturday politely declining the White House’s offer of providing rapid COVID-19 testing to those on Capitol Hill.

“Congress is grateful for the Administration’s generous offer to deploy rapid COVID-19 testing capabilities to Capitol Hill, but we respectfully decline the offer at this time,” the two said days before the Senate is to return to Washington. “Our country’s testing capacities are continuing to scale up nationwide and Congress wants to keep directing resources to the front-line facilities where they can do the most good the most quickly.”

Matt Salmon, a former conservative Republican member of Congress from Arizona, said there is a lot of frustration that more safeguards were not put in place for the PPP. Many “mom and pop” businesses, he said, initially came up short.

“Many of those people were told by their big banks that you’re out of luck, you didn’t qualify this time around. I know I heard it from a lot of small-business people that didn’t qualify or got little or no response from their banks,” he said. “I think there will be repercussions.”

GOP lawmakers such as Scott and Sen. Pat Toomey (R-Pa.) are pushing reforms.

“People are seeing where the money has gone to big corporations rather than small businesses and I’ve seen in a revulsion about this that runs across both Democrats and Republicans,” said Thomas Volgy, a professor of political science at the University of Arizona.

Stock trades at the beginning of the coronavirus made by several senators have also come under negative attention. Trades by retiring Sen. Richard Burr (R-S.C.) are under investigation by the Justice Department, while trades by Sen. Kelly Loeffler (R-Ga.) have become an issue in her reelection campaign.

Burr’s attorney says Burr made the transactions based on public information, and the North Carolina senator has asked the Senate Ethics Committee to conduct a review to clear him of suspicions of misconduct.

Loeffler says the trades were made by a third-party manager and that she didn’t know about them until after the fact, but one of her opponents in Georgia’s open primary, House Judiciary Committee ranking member Doug Collins (R-Ga.), has attacked her relentlessly over the appearance of misconduct.

Loeffler and her husband, Jeffrey Sprecher, the chairman of the New York Stock Exchange, said last month they would divest from individual stocks and move into exchange-traded funds and mutual funds to “move beyond the distraction.”

Republicans have pointed out that Sen. Dianne Feinstein (Calif.), a senior Democrat on the Senate Intelligence Committee, reported selling at least $500,000 worth of shares in the biotech company Allogene Therapeutics on Jan. 31 and $1 million worth of Allogene shares on Feb. 18.

Feinstein’s office has said the trades were made by her husband, Richard Blum, and that she “has no involvement whatsoever in her husband’s financial and business decisions.”

Republicans in Alabama, Arizona, New Hampshire and North Carolina are calling for senators who might have profited off privileged information to be held accountable if they violated the law or the public trust by selling millions of dollars of stock based on information received at a Senate briefing.

“I don’t know the situation with those particular senators, whether or not they really used insider information, but the perception of it hasn’t been good and everybody knows that politicians live or die by perception,” Salmon said.

Former Sen. Jeff Sessions (R), who is running to win back his old seat in Alabama, said over the weekend that senators need to be prosecuted if investigators determine they violated the STOCK Act, which he voted for in 2012.

The battle for the Senate is likely to be determined in part by Trump’s fortunes. And the fight for the White House increasingly appears like it will revolve around how the president is deemed to have handled the coronavirus crisis.

Trump’s approval rating hit 49 percent in a Gallup poll released Thursday, matching his previous best in the Gallup survey, but other polls have showed his job approval numbers sliding over the past month.

A recent survey of 22,000 Americans across the country by Harvard, Northeastern and Rutgers universities found that every one of the nation’s governors had a higher approval rating than Trump in his or her state.

How Americans view the role of government in November will also be a factor given the unprecedented actions taken to limit the economic cost from COVID-19.

The GOP has embraced heavy spending less than a decade after it sought to shrink the size of the federal government after the last recession.

Senate Minority Leader Charles Schumer (D-N.Y.) and Pelosi argue the pandemic has highlighted the need for a strong and effective federal government.

“When you have a crisis like this, a scourge that shakes us to our bones, private industry can’t get you out of the problem. Only government can,” Schumer said on March 26. “We believe in government to help people. ... We know that the private sector while important is not the end-all and be-all.”

McConnell and some other Republicans have said that as Congress considers additional legislation to deal with the economic fallout, it must consider the nation’s fiscal future.

But there are also Republicans embracing ideas that would have not seemed possible before the crisis.

Sen. Josh Hawley (R-Mo.), a freshman senator who is seen by some as a future presidential candidate, has proposed the federal government pay 80 percent of workers’ wages, up to the national median wage, until the crisis is over.

Hawley argued in an April 8 Washington Post op-ed that the CARES Act had not gone far enough.

“That is why the next round of coronavirus relief legislation is critical. Congress must get it right. We cannot afford to make a few fixes to existing programs and hope for the best. We must think differently and be bold,” he wrote.

“During such a severe economic crisis, actions like these by large corporations who have themselves received billions in taxpayer dollars are outrageous.”