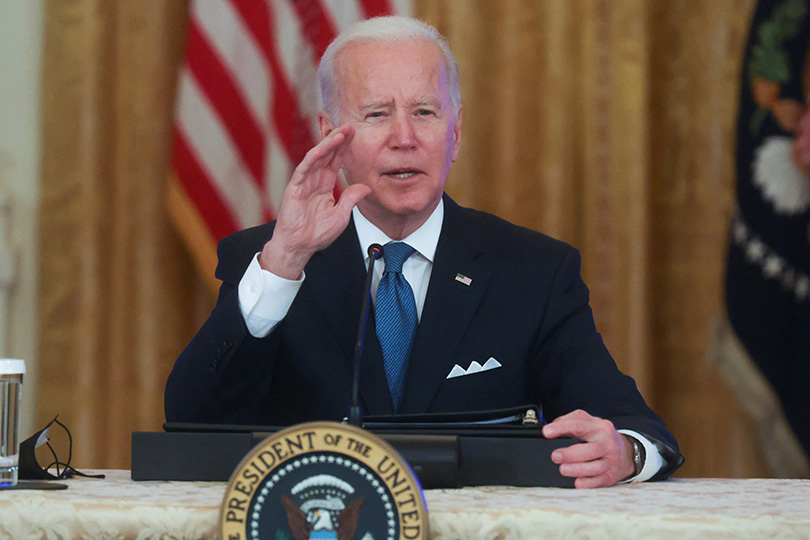 Biden held his second press conference of his presidency this week. And, although it wasn’t one of the publicized reasons, the two-hour long question and answer session was clearly designed to prove that despite stories to the contrary, Biden has the stamina and mental ability to be president.

The questions ranged from the Ukraine to politics and the fate of several of his landmark legislative initiatives. Biden agreed that his “Build Back Better” legislation would need to be cut up into smaller pieces of legislation to pass.

Biden did allude to his plummeting popularity. Early in his opening statement, Biden said he wouldn't simply accept the status quo as a "new normal.”

“I’m not going to give up and accept things as they are now...some people call it a new normal. I call it a job not yet finished,” Biden said.

On the geopolitical front, Biden said that the US isn't yet ready to remove President Trump's tariffs on China. Concerning a timeline, does he have a deadline for possible removal? "The answer is uncertain," Biden said. His top trade official is working on it.

And as oil prices continue their climb, Biden said he is doing everything he can to increase available supplies.

Later, he said that it's not too late for talks with Iran to yield another deal. “There is some progress being made, but it remains to be seen if Tehran will make a deal, Biden said in a news conference Wednesday.

He also confirmed that VP Kamala Harris will be his running mate in 2024.

Biden’s comments on the 2022 election were guaranteed to increase the divide between Republicans and Democrats as well as increase the talk about legitimate elections.

Asked about the 2022 election, Biden said, “Oh, yeah, I think it could easily be illegitimate.”

This statement was quickly corrected by the White House.

It wasn’t verbal fumbles or gaffs that caused Biden the most trouble during the press conference. Biden spent a lot of time on the Russia-Ukraine crisis. While he consistently echoed prior assessments given via White House Press Secretary Jen Psaki (that an invasion could come "at any point"), the most interesting new statements from the president gave a bit more detail as to what he's willing to do or not willing to do regarding "consequences".

The big question that remains is: given any "incursion" or "offensive" by Russia into Eastern Ukraine, will Biden order a military response in support of Kiev, or will the US stop short by merely ramping up sanctions? Biden began early in the Q&A with journalists by underscoring his belief that Putin is planning to invade Ukraine: "my guess is he will move in," Biden stated.

Biden then followed it with statements suggesting the White House really is still at the stage of 'guess work': "But as Biden himself acknowledged, it's unclear whether Putin himself has decided what comes next." He also made a distinction between a "minor incursion" and full-on "invasion" - reportedly angering Ukrainian officials.

"I believe he's calculating what the immediate short-term and the near-term and the long-term consequences for Russia will be. And I don't think he's made up his mind yet," Biden stressed. He admitted that "I don't know if Putin decided what he wants to do" - in a bit of a glaring contradiction to all the breathless admin official statements of the last two weeks asserting an "invasion" is coming. There was also this contradiction during the presser:

Biden: Decision to invade Ukraine "will depend on what side of bed Putin gets up on..."

He suggested a "minor incursion" would elicit a lesser response than a full-scale invasion of the country.

"I'm not so sure he is certain what he is going to do. My guess is he will move in. He has to do something," Biden said, describing a leader searching for relevance in a post-Soviet world. "He is trying to find his place in the world between China and the west."

Biden's prediction of an invasion is the firmest acknowledgment to date the United States fully expects Putin to move after amassing 100,000 troops along the Ukraine border.

Biden then went through different US responses.

"He's never seen sanctions like the ones I promised will be imposed if he moves, number one," the president said. "It's one thing if it's a minor incursion and we end up having to fight about what to do and not do, et cetera."

"But if they do what they're capable of doing with the forces amassed on the border, it is going to be a disaster for Russia if they further invade Ukraine. And that our allies and partners are ready to impose severe cost and significant harm on Russia and the Russian economy," he added. This might include barring Russia from "anything that involves dollar denominations"; and notably in recent months the West has threatened to cut Russia off from SWIFT - the international banking and dollar transfer system.

Despite the warnings of a major Russian incursion into Ukraine, Biden suggested that any military action would be limited and the cost to Putin would be great.

"The cost of going into Ukraine in terms of physical loss of life for the Russians -- they'll be able to prevail over time but it's going to be heavy," he said. "It's going to be real. It's going to be consequential. Putin has a stark choice. Either de-escalation or diplomacy. Confrontation and consequences."

"This is not all just a cake walk for Russia," he went on. "Militarily, they have overwhelming superiority. And as it relates to Ukraine, they'll pay a stiff price immediately, near term, medium term and long term if they do it."

Biden speculated Putin was not seeking "any full-blown war," but said he did believe he was looking for some type of confrontation.

"Do I think he'll test the west? Test the United States and NATO as significantly as he can? Yes, I think he will. But I think he'll pay a serious and dear price for it."

"He doesn't think now will cost him what it's going to cost him," he said. "And I think he'll regret having done it."

Biden’s comments caused an uproar both in Washington and the Ukraine. Ukrainian officials were deeply disappointed and angered by Biden's press event, wherein he made a distinction between a potential "minor incursion" by Russian forces vs. an all-out "invasion.” On Thursday, Ukrainian President Zelensky said, “We want to remind the great powers that there are no minor incursions and small nations. Just as there are no minor casualties and little grief from the loss of loved ones. I say this as the President of a great power.”

Although the White House tried to clarify the Biden comments, on Thursday the President sought to clarify his words at the start of a press event that was supposed to focus on infrastructure. "I've been absolutely clear with President Putin. He has no misunderstanding. If any assembled Russian units move across the Ukrainian border, that is an invasion”.

"Let there be no doubt at all that if Putin makes this choice, Russia will pay a heavy price," Biden continued. He noted this could also come in the form of a Russian cyber-attack or other form of irregular warfare.

Of course, actions speak louder than words and the US is frantically trying to beef up Ukraine’s military. US officials confirmed to CBS News that the Biden Administration has given permission to several NATO allies to send emergency shipments of American made weapons – including antitank missiles – to Ukraine to reinforce the country’s defenses. These allies include Estonia, Latvia, Lithuania, and the United Kingdom.

The thinking amongst many military thinkers is that Putin is waiting until the hard freezes take place so Russian tanks will not be hindered by mud.