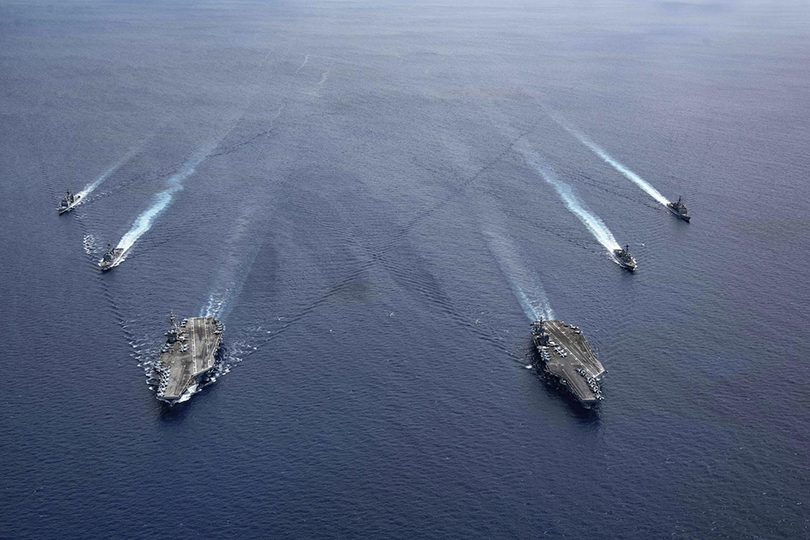 If anyone thought that Chinese American relations could not get worse, they were wrong, as President Trump and the State Department ratcheted up pressure on the Chinese government.

This week, the US State Department released a press release on the change in US government policy. The document stated, “We are making clear: Beijing’s claims to offshore resources across most of the South China Sea are completely unlawful, as is its campaign to control them.”

The day after making the South China Sea announcement, Trump signed an executive order (Hong Kong Autonomy Act) that eliminated trade benefits for Hong Kong as long as Mainland China continued its “draconian” actions against the people of that former British colony.

That was followed by the State Department’s imposition of visa restrictions on Chinese corporate executives like Huawei who “facilitate human rights violations”.

“Get out or risk the consequences,” Secretary of State Pompeo said, referring to the new sanctions on China.

Pompeo is heading to Europe next week to discuss China’s treatment of Hong Kong with American allies.

China responded by summoning the US Ambassador to “solemn representations” by Vice Foreign Minister Zeguang.

China said, “This is a gross interference in China’s internal affairs and seriously violated international law.”

These moves have raised anew concerns about a military conflict with China. Potential Secretary of Defense in a Biden Administration Michele Flournoy wrote in Foreign Affairs that the two nations could, “all too easily stumble into conflict.”

Flournoy warned that China has focused on asymmetric tactics that are “designed to prevent the United States from projecting military power into East Asia in order to defend its interests or allies.”

She continues, “The United States can no longer expect to quickly achieve air, space, or maritime superiority.”

Nothing demonstrates the thin line between deterrence or inability to project power as this week’s fire onboard the USS Bonhomme Richard, an amphibious ship that has the capability of a light aircraft carrier. It is a Wasp Class Amphibious Assault ship and its name is one of the most honored in the US Navy – going back to Revolutionary War. The Captain of the original Bonhomme Richard was the Revolutionary War hero of the US Navy, John Paul Jones.

The ship was undergoing a modernization before being deployed once again in the Western Pacific, where it would undoubtedly come face to face with the Chinese Navy in the South China Sea.

The fire started early Sunday morning. As only about 160 sailors of the 1,000 crew were onboard, the fire quickly overwhelmed the firefighters and they were withdrawn. The fire has raged over 4 days, making it the most damaging fire in the history of the US Navy – surpassing the fire on the USS Forestall during the Vietnam War over 50 years ago.

At this time, there are questions about how the fire started. It began in a storage area, where there was no work being done. Any work that required high temperatures (welding, etc.) has a “fire watch” that can quickly put out a fire.

Although spontaneous combustion can take place, it is rare and is usually quickly limited due to the compartmentalization of navy ships. Journalists have noted that there are cables and other lines used in the repair and modernization process that could keep hatches from being closed, but they are usually limited to the actual work area, not storage in remote parts of the ship.

As the fire comes under control, the major question is if the ship can be repaired or if it will have to be scrapped. At a press conference on Tuesday, the Navy was optimistic. It appears that the four engine room compartments were not damaged. And, although temperatures inside the ships may have reached 1,000 degrees, there is no evidence that the damage will be serious enough to scrap the ship.

The final answer will only be made after a Survey Team goes onboard to make an evaluation.

Even if the ship can be brought back into active service, much will have to be done. The ship’s “island,” where the bridge and air operations control are, were made of aluminum to decrease topside weight. These melted in the fire and will have to be replaced. There will also have to be replacement of cables, electronics, and structural items. The repairs could take a couple of years.

However, it is not uncommon for heavily damaged ships to be put back into operation. The battleship USS West Virginia was sunk at Pearl Harbor in WWII but was a flagship at the D-Day landings in 1944.

If the ship is more seriously damaged, it will have to be scrapped, with many of its components like the gas turbine engines being removed to be spare parts. Since the ship is already 22 years old, the cost of repair (versus the cost of replacement) may not make it economical in the long run.

If the ship is scrapped, it may very likely be replaced by the newer America Class amphibious ship which came out of the shipyards beginning in 2014. These are like the Wasp Class that the USS Bonhomme Richard belongs to but has more space for aviation operations and less for amphibious operations.

Although frequently seen in the role of a light carrier, the Wasp Class of ships are designed to embark, deploy, and land a Marine landing force. Although they can deploy a squadron of Harrier jump jets or the new F-35 fighter aircraft, it designed to primarily support helicopters. In fact, one of the reasons for the current upgrade was to make the flight deck (designed for helicopters) more resistant to the high temperatures of F-35 operations.

In the role of an amphibious assault ship and a light carrier, the LHD ships are an ideal ship for the Western Pacific operations. Not only can they carry out anti-submarine operations with its helicopters, it can use the F-35 for ground support or limited air superiority operations. Then they can land a force of Marines to capture some of the islands the Chinese have either constructed or enlarged in the last few years.

This combination of roles makes the USS Bonhomme Richard and its sister ships a real threat to Chinese power in the South China Sea.

In fact, the Chinese Navy is undoubtedly happy that the Bonhomme Richard is out of commission for a couple of years. In fact, apart from America’s nuclear-powered aircraft carriers, these amphibious ships pose the biggest threat to the Chinese Navy and its controlled islands.

All this does raise the question, “Was the fire a case of sabotage?”

Sabotage during shipyard availability periods has always been a threat. Shipyard workers are not as carefully vetted as the sailors and moving the crew off the ship during these periods makes it easier to avoid scrutiny. Frequently, ships order their commissioned officers to make random walks through the ship 24/7 to prevent potential sabotage or theft of equipment. Workers are also teamed up with sailors who stand as a fire watch while much of the work is done. All this limits the risk of sabotage.

However, there are some issues that make the potential of sabotage possible.

The first was the location of the fire. It was in the stern of the ship, where no work was being done. The storerooms contained supplies that would be airlifted to Marines on the beach. The supplies were palletized and covered in a heavy cardboard called triwall.

Usually, storerooms not being used are closed and locked to prevent unauthorized access and to limit the spread of fire.

In this case, the fire was able to spread quickly – something that should not have happened under normal procedures.

The timing of the fire is also suspicious. It occurred early Sunday morning, a time when there were few crewmen onboard to observe unauthorized activity or fight the fire. Ironically, the time was like the attack on Pearl Harbor on December 7, 1941, which was planned to hit the US Navy at its most vulnerable time.

Could China have been involved? There is no evidence to indicate that. However, sabotage is now a legitimate foreign policy tool, as seen in the recent series of explosions at sensitive military bases in Iran.

China has penetrated many sectors of the US economy and there have been arrests of Americans (some highly respected scientists) who have been working for the Chinese. It is not unthinkable that the Chinese would be able to find willing accomplices in the San Diego shipyard. These sources would be able to inform the Chinese of shipboard modernization, readiness of navy ships, and the status of repairs.

If the Chinese felt that taking out a ship like the Bonhomme Richard was critical to its strategy in the South China Sea, it could have probably been able to do it.

However, that does not make sabotage the most likely cause. In recent years, the US Navy has had several public failures like the Corona Virus outbreak on the aircraft carrier USS Theodore Roosevelt, which put it out of operation for a couple of months.

There were also several Navy collisions with commercial ships in the Pacific. These collisions were finally blamed on the lack of training of junior officers.

Is it possible that damage control training has deteriorated in the US Navy?

In other words, many of the crew-members onboard the Bonhomme Richard when the fire started were untrained in realistic firefighting.

Traditionally the US Navy has had a reputation of “Not giving up the ship.” Ships that would have sunk if in another navy were kept afloat thanks to the rigorous damage control training once required in the US Fleet. The idea that a navy ship could still be on fire for four days, while pier side would have been unthinkable.

Ironically, the first USS Bonhomme Richard caught fire and eventually sank from damage caused during combat in 1779. However, it sank only after capturing the larger and more powerful British ship HMS Serapis