Will an attack on Turkish troops in Syria change the course of the war? 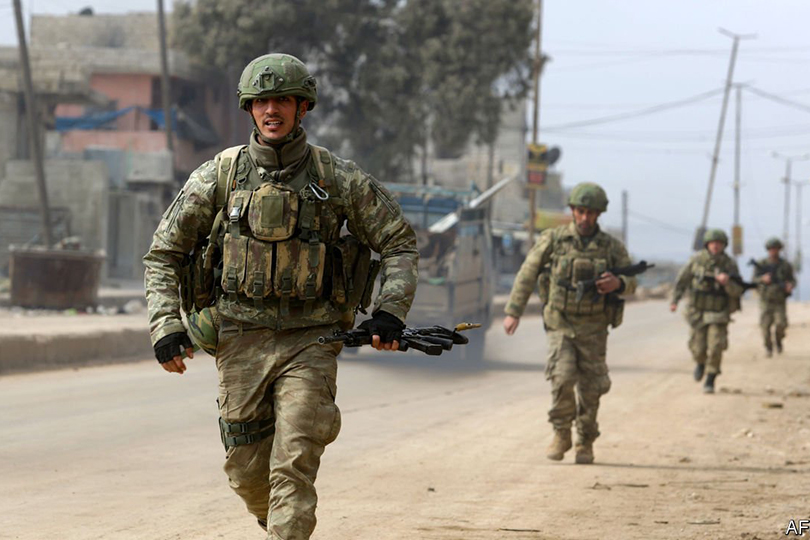 It had been decades since Turkey suffered such heavy losses in a single day of battle, let alone a single attack. The air strike that killed at least 33 Turkish soldiers in Syria’s Idlib province on February 27th risks escalating a messy civil war that has already taken hundreds of thousands of lives, created millions of refugees and dragged in foreign powers. Fears are now growing of a direct conflict between Russia, which supports the regime of Bashar al-Assad in Syria, and Turkey, which supports the rebels fighting it.

Turkey blamed Mr Assad’s forces for the air strike, even though Russian jets have been much more active in the area. Russia denied responsibility, but suggested that Turkey may have invited the attack by placing its troops alongside Syrian rebels and not informing Russia of their location. Just hours after the strike Russia sent two warships armed with cruise missiles to the eastern Mediterranean. The warships sailed through the Bosphorus, which bisects Istanbul, Turkey’s biggest city.

Talks between Russia and Turkey will aim to de-escalate the situation. But tensions have been rising over Idlib, the last rebel stronghold, where Russia and Mr Assad have been waging an increasingly bloody offensive. Their bombardment of the province, home to some 3m people, many of whom fled fighting elsewhere, has killed at least 300 in the last three months and sent another million rushing towards Turkey’s sealed border. Hospitals, schools and civilian areas have been hit. Aid groups working in the area say they are overwhelmed.

Fearing another flood of migrants, Turkey sent thousands of troops to Idlib in recent weeks to stop the offensive. President Recep Tayyip Erdogan has called for a Turkish-controlled safe zone in the region for displaced people. Recently he warned Mr Assad to move away from Turkish positions. Hours before the attack on February 27th, he claimed that the battle was shifting in Turkey’s favour after the rebels captured the strategic town of Saraqeb. But Turkey does not control the air and its positions have been cut off by the Syrian army. Over 50 Turkish soldiers have now been killed since January.

Turkey’s involvement has been costly for Mr Assad. Analysts say it has destroyed or captured scores of Syrian tanks. At least two helicopters have been shot down, probably with missiles supplied by Turkey. The Syrian army is scarred by years of war; the regime is skint, in part because of Western sanctions. Russia worries that a long war of attrition with Turkey could leave Mr Assad’s army unable to defend its gains. Those concerns may have increased on February 28th, when Turkey carried out more than 200 attacks on Syrian targets in retaliation for the air strike. It claims to have killed over 300 Syrian troops in the response, and over 2,000 since February 10th.

Diplomats have hoped for years that Russia might be able to restrain Mr Assad. They have consistently overestimated both its will and its ability to do so. Though the Russian foreign ministry is unhappy about the Syrian offensive in Idlib—because it complicates ties with Turkey—Russia’s defence ministry would be happy to see the regime conquer the province. Even Iran, Syria’s other key foreign ally, has been dragged into Idlib, a fight it had little interest in. It has dispatched planeloads of militiamen to aid the regime.

Turkey, a NATO member, has renewed its call for the alliance to patrol a no-fly zone over Idlib. On February 28th ambassadors from all 29 NATO countries gathered at Turkey’s request. So far, though, it has received only expressions of solidarity. Article Five, NATO’s mutual-defence clause, does not apply, because Turkish forces were struck on Syrian soil. America has denied Turkey’s request for Patriot missiles to defend itself against attack. The Pentagon says it has none to spare—at least not until Turkey scraps its Russian S400 missile system. President Donald Trump, for his part, wants out of Syria.

To put pressure on European countries, Turkey opened its western borders on February 28th and encouraged refugees to make their way to Greece and Bulgaria. Turkish television showed people marching towards the frontier. Mr Erdogan has previously threatened to ditch the deal that gives Turkey €6bn ($6.6bn) in exchange for stemming the flow of migrants to Europe. The act is getting old to some. “He has cried wolf too many times,” says an EU official. Refugees in Turkey have been there for years and are reluctant to move, goes the thinking of optimistic diplomats. But southern European countries complained of more arrivals in 2019, blaming Turkey. Greece and Bulgaria say they are reinforcing their borders.

At home Mr Erdogan is coming under increasing pressure. Earlier incursions into Syria to fight Kurdish rebels and Islamic State jihadists were seen by the public as noble efforts to keep Turkey safe. Now some are wondering why Mr Erdogan has turned Turkish soldiers into human shields for the rebels in Idlib, many of whom are extremists. The opposition has called for talks with Mr Assad, enraging the president. But Mr Erdogan does not appear to have a winning strategy, as Turkey sinks deeper into the conflict.