What will happen to Iraqi Shiite militias after one key leader’s death? 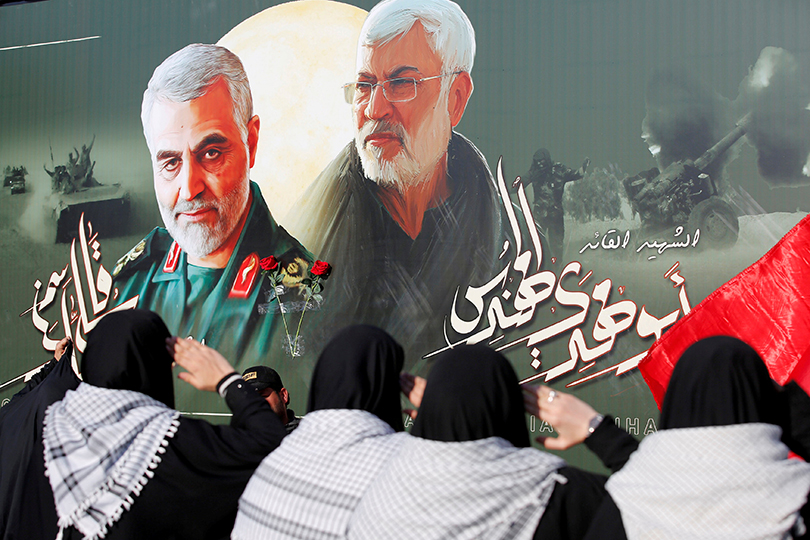 The U.S. decision to assassinate Maj. Gen. Qasem Soleimani in January inadvertently also caused the death of Abu Mahdi al-Muhandis, the powerful and influential head of Kataib Hezbollah and de facto head of the Popular Mobilization Forces (PMF). While commentators have focused on Soleimani, the death of Muhandis has broad implications for Iraq’s Shiite militia network.

The killing of a major figure at the helm of the militia network for years, along with Soleimani, the network’s most important external patron, comes at a moment of weakness and uncertainty for Iran and its allies in Iraq. In recent months, Iraqi protesters have lamented the role of Iran’s proxies and the PMF in the brutal suppression of the civilian-led movement, which has strengthened their resolve to remove these groups from power.

The political uncertainty facing Iran-aligned groups was substantially compounded Jan. 3, when a U.S. drone targeted and killed Soleimani and Muhandis. Iran and its Iraqi allies no longer enjoy the aura of invincibility that for years has shaped their grip on the Iraqi political space.

Muhandis was a critical pillar in Iraq’s wide-ranging network of Iranian proxies and militias. His death throws Iran’s Iraqi proxy network into potential disarray, opening up new battles in Iraqi Shiite politics that could lead in several directions. Iraq is bracing itself for two immediate reverberations: a potentially violent showdown between rival Shiite militia groups looking to shape and exploit the post-Muhandis landscape; and a volatile political environment in which Iran and the United States may still come into direct conflict in the fallout over Soleimani’s assassination.

WHAT ARE THE PMF MILITIAS?

Over the past decade, Shiite militias in Iraq have expanded dramatically and have transitioned into formidable political movements. Iran mobilized these groups initially in 2003 to impede the U.S. reconstruction process and extend Iran’s regional reach. They also ensured that Iraq did not become a staging ground for overthrowing the regime in Iran.

Since the advent of the war on the Islamic State, Iran-aligned Shiite militia groups have enhanced their hold on the Iraqi state and the political system. This reflects the importance and effectiveness of Iranian patronage as well as the fragility of Iraq — and the security vacuum after the fall of the Iraqi army in 2014, when the Islamic State seized Mosul.

In response to this cataclysmic event, Iran’s proxies formed and led an 80,000- to 100,000-member umbrella militia organization — the PMF. The PMF has since become a constitutionally integrated component of the Iraqi armed forces. It won widespread acclaim for its battlefield heroics against the Islamic State and has subsumed Iraq’s conventional armed forces since its inception.

Iraqi officials describe Muhandis as Soleimani’s right-hand man and a formidable political operator. He was operationally integrated into Iran’s Islamic Revolutionary Guard Corps (IRGC) more than any of Iran’s other partners in Iraq. As head of the PMF and powerful militia group Kataib Hezbollah, Muhandis played a critical role in enhancing Iran’s influence over the Iraqi political system.

Iran will probably find it more difficult to manage and maintain this network of proxies and influencers in a complex political landscape, one that is also contested by other external powers. The political space in Iraq is highly congested — and difficult to navigate and manage when it becomes unstable. Soleimani’s constant shuttling between Baghdad and Tehran before his death, for example, was a response to the crisis Iran faced in Iraq, one that was precipitated by the anti-government reform protests.

Iran has tens of thousands of fighters under its command in Iraq, and the PMF remains a nascent institution. The sheer size of this network requires an operationally and politically experienced leader. For Iran, it may take years to find a viable replacement for Muhandis.

Iraq’s Shiite militias have been locked in intense rivalry for power and resources for decades and have been moving toward a major confrontation for some time. The coming months could see two major political forces come head-to-head: Iran-aligned groups that lead the PMF; and Muqtada al-Sadr, a cleric who leads Iraq’s most powerful sociopolitical movement and commands a militia force of tens of thousands known as the Mahdi Army, which fought fierce battles against Western forces, as well as against Iran’s proxies. The Sadrist movement came in first in Iraq’s 2018 national elections. Its foremost rival, the PMF, came in an astounding second on their electoral debut.

Sadr recently announced that he had “reactivated” the Mahdi Army — which was rebranded as the Peace Brigades to expand the movement’s support beyond its traditional base. The cleric is attempting to lead the effort to oust U.S. troops from Iraq. While this might seem to demonstrate his political alignment with Iran, it has more to do with his attempts to suppress the post-Soleimani opportunity for Iran’s direct proxies to expand their influence and power at his expense.

The battle to shape the post-Soleimani (and post-Muhandis) militia landscape between competing Shiite militia groups will complicate Iran’s attempts to repair the political and operational cracks in its proxy network. The militia network in Iraq has been critical to Iran’s capacity to exert unparalleled political influence over the past decade, and reflects years of investing immense energy and resources.

Competing interests could now undermine this influence, if not reverse it — and that could present an opportunity for the United States to strengthen its position in Iraq. Given Washington’s lack of a viable political strategy and its limited ground presence and influence in Iraq, this seems unlikely to materialize, however.

Sadr and his rivals recently struck a deal that saw the cleric withdraw his support for the protesters and back a forthcoming Iraqi government — effectively paving the way for the suppression of protesters by militias — but it’s a fragile deal that could quickly unravel.

The struggle for power among rival Shiite militia groups, meanwhile, may well cross over into vital U.S. strategic interests in Iraq, such as the war on the Islamic State or the presence of U.S. troops in the country. And Washington could still find itself entangled in a violent intra-Shiite contest in the not-so-distant future, especially one that brings key U.S. allies into the conflict or paves the way for an Iranian coup in Iraq — which will increase the prospect of a direct U.S.-Iran confrontation on Iraqi soil.