How Islam treated the dangers of hunger? 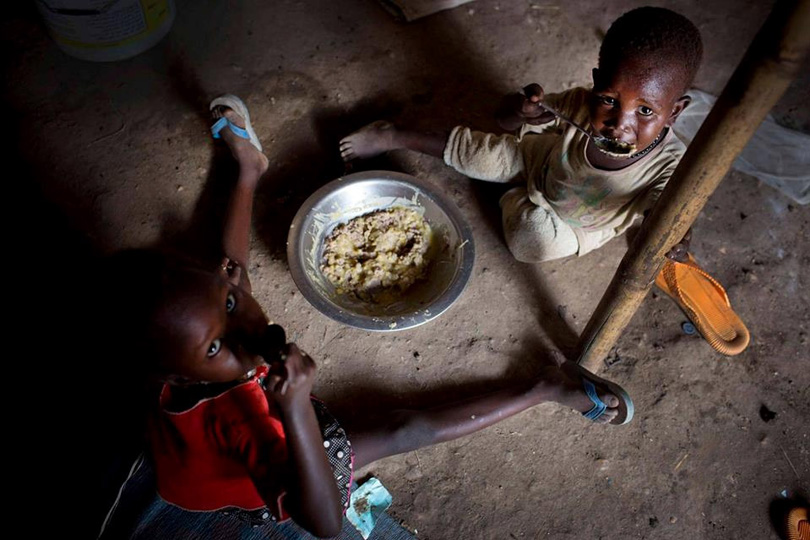 Jameel Ouda
Adam Center for the Defence of Rights and Freedom *

The need of the human being for food is one of the basic physiological needs for the survival and protection of the Man. The lack of food or minimizing its quantities will endanger his life. So, as much as Man needs air for breathing, he needs water for quenching his thirst and food to feel his satisfaction.

It was written in the International Declaration to Eradicate Hunger and Mal-nutrition that "every man, woman and child has the, irrevocable, right to free himself from hunger and mal-nutrition to develop his physical and mental capabilities, as well as preserving them. The society of today has the sources, organizational and technological and, consequently, the competence, to achieve this goal. Thus, the eradication of hunger is a joint goal for all the countries of the international community, particularly the advanced countries, as well as the countries that are able to provide assistance".

Despite that, hunger remained the prime danger that continuously threatens the life of the human being and his health. UN Food and Agriculture Organization's (FAO) statistics showed that "about 795 million people in the world have no enough access to food to have good health. This means that one person, out of nine, is within this category.

Most of the hungry people live in the developing world, where 12.9% of the people suffer of mal-nutrition, which is responsible for about half of the death cases (45%) among the children below the fifth year. In other words, we have about 3.1 million deaths annually. One child, out of six, - nearly 100 million children- suffers of weight loss in the developing countries.

What do we mean by the term "hunger" and the term of "mal-nutrition"? What’re their relations with poverty phenomenon? How the international community looks to hunger? What are the proposed solutions? Has Islam treated the hunger question? If so, why the Islamic and Arab people are ahead in the list of hunger in the world, despite their wealth that exceeds the rich and lavish countries?

The term "hunger" is used as a synonym for "mal-nutrition", which is the term to describe the people's case that their food does not consist of a certain type of food nutrition or more than enough for the minimum basic needs to provide them with energy, activity, growth, revival of dead tissues and organize their biological processes.

A number of experts said that there should be three conditions before announcing the case of famine in a certain country: 20% of the families, at least, should suffer great shortage in food and minimum ability to deal with the crisis and the acute mal-nutrition should exceed 30%, as well as the death cases should be not less than two cases for 10.000 people.

The United Nations announced a new famine in the south of Sudan (February, 2017), affecting about 100.000 people, which it is the first in six years.

There is no specific reason for the problem of "hunger". The wars and armed conflicts all over the world may be the main and basic reason for the famines in different parts of the universe, to be followed by the natural catastrophes, like draughts and other reasons, in the second level.

Poverty and weakness of the agricultural infrastructure and over-exploitation of the land, may lead to dissemination of famine in a number of countries.

The economic and social crises in different countries and times lead to the spread of hunger and entrap many people in the net of famine.

Specialists see that hunger, not only affects the person, but also imposes great ethical, humanitarian and economic burdens on the developing world. The economists estimate that each child suffers weakness in body and mental development due to hunger and mal-nutrition, is losing 5-10% of his earned income all his life.

The tensions and problems threaten the security and political stability in a number of countries, though the hunger, by itself, is a result of political and security instability that affect many parts of the world.

Hunger results in minimizing development and hinders knowledge progress that will lead to massive exodus and great defects in the social structures and demographic balances in many countries.

To the United Nations, development is a basic ingredient to combat hunger, where the rich countries will be less vulnerable for food insecurity, as well as their social protection will permit the very poor to participate in the development process to attain decent work.

Added to all that, the adoption of the modern governorace, political stability, sovereignty of law, absence of conflicts and civil wars, climate shocks and severe fluctuations in food price are some of these elements.

Despite the strenuous efforts exerted by the international community and the governments to minimize the cases of hunger and lack of food, most of the studies and strategies for combating hunger phenomenon were not successful and did not achieve their goals, irrespective of the huge amounts of money spent on these goals.

The view of Islam on hunger and poverty may be different from the inclinations of the United Nations.

One of the wisdoms of God in creating human beings made them to fill their mouths, stomachs with food. When God created the human beings made the food an important ingredient for their lives and for their continuation, where he bestowed upon them different kinds of food, which was mentioned in the Holy Quran: (Now let man look at his food, How We pour down water in abundance, Then We cleave the earth — a proper cleaving — Then We cause to grow therein grain) (Abassa: 27).

In another verse, God said: (And the cattle too He has created; you find in them warmth and other uses; and some of them you eat).( Al-Nahl: 5).

Almighty God made that the release from doomsday's inferno is to grant food to other people. (Or feeding in a day of hunger)(Al-Balad:14)., which meant granting food during famine periods.

Out of this concept, Islam sees that poverty and hunger did not stem from the scarcity of production sources or stingy nature, but the Man himself.

In these verses, following the recognition of the wealth bestowed by God to Man, it was proved that it is enough to satisfy the need of the human beings and attain all his needs. The real problem is not the stingy nature or inability to meet human demands, but from the Man himself, so when Man is "ungrateful", he made injustice in distributing the wealth and utilizing all sources granted by God. These are the main entangled reasons for the problem lived by Man since ancient ages.

The view of Islam on the money stems out from deep reality; namely that the money is, basically, is from God and given to us on His behalf, not property. The righteous man is employed to use the money in the direction wanted by God, so if he did not do so, he misbehaved this trust.

God made the existence of the poor and the rich as an examination for both sides, particularly for the rich.

God said: (The ignorant man thinks them to be free from want because of their abstaining from begging). (Al-Baqarah: 273).

Imam Ali Bin Abi Talib spoke of the same matter for the rich and the poor to examine their thankfulness and patience. (Nahj al-Balagha: 89).

Imam Ali said that the richness and calamities is a favor from God. (Nahj al-Balagah: 273).

Islam, after providing its followers with ethical principles and doctrines that will make Man as a brother for his fellow Man, put the necessary legislations against deviations, so forbade exploitation, monopoly and wasting or misusing the funds.

Sayyid Mrtadha al-Shirazi, in his book "Strategies for wealth production and poverty combating in the guidelines of Imam Ali", sees that the abidance by the philosophy of God in our universe is one of the most important strategies to eradicate poverty and hunger.

In simple words, it is the response and interaction with the saying of the Lord that what he created in earth is for Man. So, all the wealth is for all people, which means that the state does not own the territories, minerals, seas and air spaces…. They directly belong to all people, so any one who gets something, it will be his, and thus the state has to organize this process.

According to Al-Shirazi, the question of poverty, hunger and lack of food, from Islamic view point, are governed by a number of elements, including:

* Individual-personal elements where the members can control, like gambling, usury, thrifting, alms, and close human relations…..

* Elements connected with the state, its laws, government approach in ruling and economic administration, as well as their control of the wealth, how to deal with the poor and the rich and other ordinary people, such as the property of the state, stealing from government, extra-employment, military armament, mal-distribution, balance between rural and urban areas and flexibility in imposing taxes ….

* Elements connected with the state and the people, such as rational spending, social solidarity, national security, integrity, financial corruption, monopoly and others.

It is one of the independent non-profitable Non-Governmental Organizations, undertaking defending the rights and freedoms in different countries under the motto (We have honored the Man), irrespective of his color, race, religion or sect.
It aims are disseminating the legal and judicial culture in the society, providing consultancy and legal support, encouraging to use the rights and freedoms through peaceful means, as well as observing violations and breaches that might be practiced against the people or group of people and calling the respective government to adopt the standards of human rights in different directions.