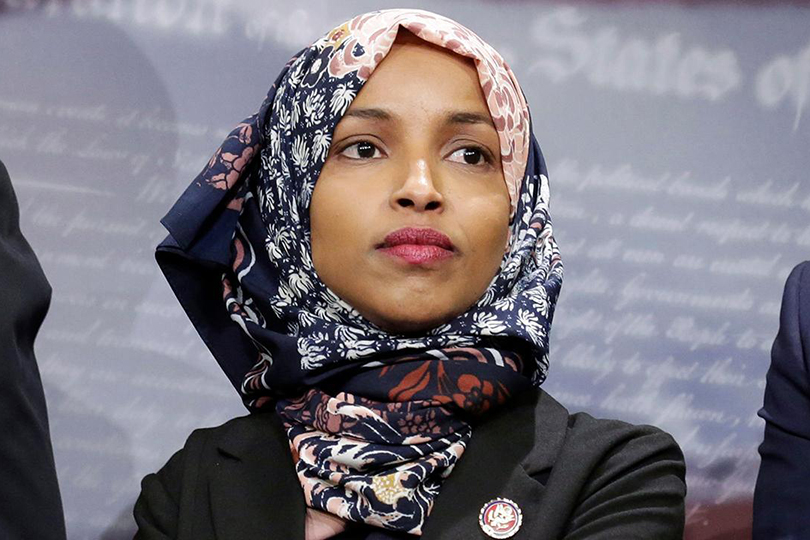 Trump supporters and protesters accusing Omar of being "anti-Semitic" over a tweet last month rallied outside the Woodland Hills, California, Hilton hotel Saturday as one of the country's first two elected Muslim congresswomen spoke inside.

Omar, a Somali immigrant, told the packed ballroom Muslims knew attacks on Islam would get "worse" under Trump and inspire attacks similar to the white supremacist-led shooting that left 50 dead in Christchurch, New Zealand last weekend.

The Los Angeles Times reports Omar claimed Trump is blunt in being the first president to simply tell Americans, "Islam hates us."

“We all kind of knew that this was happening,” Omar said Saturday. “But the reason I think that many of us knew that this was going to get worse is that we finally had a leader in the White House who publicly says Islam hates us, who fuels hate against Muslims, who thinks it is okay to speak about a faith and a whole community in a way that is dehumanizing, vilifying.”

Omar was the featured speaker at the Canoga Park Hilton hotel banquet for the Council on Islamic-American Relations or CAIR. Outside, more than one hundred protesters waved U.S. and Israeli flags and accused Omar of being anti-Semitic over an "all about the Benjamins" February tweet regarding the United States traditionally sending money to Israel. She later apologized, saying "anti-Semitism is real and I am grateful for Jewish allies and colleagues who are educating me on the painful history of anti-Semitic tropes."

"Today they gather outside to protest a Muslim woman who is in Congress," Omar told CAIR banquet attendees inside, KABC-TV first reported.

“There are thoroughly fascinating people outside who for so many years have spoken about an Islam that is oppressive, an Islam that lessens and isolates its women, and today they gather outside to protest a Muslim woman who is in Congress,” Omar continued, ridiculing the protesters. “The irony in that is very entertaining to me. I don’t think many of them realize that people like myself, and many of the people in this room, could care less about what they have to say, because we know who we are, and where we belong, and what we stand for."

Omar has been the target of several Republican attacks over a recent Washington Post piece in which she called for a two-state solution to the ongoing Israel-Palestine conflict, which has resurfaced amid Trump's Golan Heights provocation in the region. Videos also emerged online in right-wing circles purporting to show Omar taking "terrorism classes," which prompted attacks from Trump attorney Rudy Giuliani.

“What is she laughing at in recalling her terrorism classes? This represents the future of the Democrat Party? God help us," Giuliani remarked.

Omar referenced Islam prophet Muhammad's frequent attacks from critics in the Quran, comparing the critics of today to the struggles he faced: "You know that when Ilhan is facing some controversy, that that is not to be afraid of.”