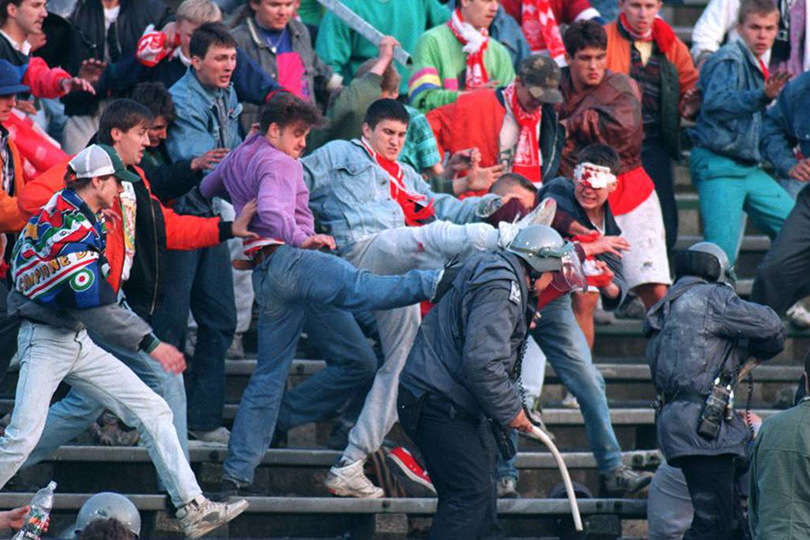 There are many reasons why even the oldest democracies, such as the US and the UK, are increasingly riven by tribal hatreds...

There are many reasons why even the oldest democracies, such as the US and the UK, are increasingly riven by tribal hatreds. But when political leaders deliberately exploit these rifts and whip up hostile emotions even further, they do immense harm to the institutions that guarantee people’s freedom and safety.

The late Alan Clark, a British politician of the Margaret Thatcher era, chiefly known for his womanizing and his hard-right views, once lamented to me the decline of the British fighting spirit that built empires and won wars. Half in jest, I suggested that this aggressive disposition was still there among British soccer hooligans who ransack stadiums and foreign towns. He replied with a dreamy look in his eyes that this was indeed something that “might be usefully tapped.”

What seemed a trifle outrageous then is now painfully real. For the hooligan spirit is indeed being tapped. Rightwing terrorism is increasing in the United Kingdom – even as Islamist violence is ebbing, at least for now. British politicians who are against the UK crashing out of the European Union without a deal receive death threats, or worse. Jo Cox, a Labour MP and outspoken anti-Brexiteer, was murdered in 2016 by a man who screamed “Britain First!” as he shot and repeatedly stabbed her.

Britain is hardly unique. In the US, extreme right-wing groups have caused havoc in such places as Charlottesville and Pittsburgh, accompanied by battle cries like “Jews will not replace us” (the “us” meaning white Christian folks). The autocratic Brazilian President Jair Bolsonaro openly extols torture. Even in Germany, violent extremism is on the rise, especially in areas that were part of the former Communist East Germany. In India, Prime Minister Narendra Modi has shown indifference, at best, to acts of political violence by Hindu extremists, often directed at Muslims.

Dictators and demagogues have always tapped the consuming resentments of people who feel that life has treated them badly. Some people are naturally drawn to violence; only the right circumstances are needed for such urges to be unleashed.

Some of this is spurred by technology. Hate and aggression that used to be kept under wraps, or confined to soccer stadiums, can now be openly expressed and instantly spread to millions of likeminded people via the Internet. This type of mob behavior is not limited to the far right. Self-righteous aggression can erupt on the left as well. The same is true of anti-Semitism. There is plenty of it in the UK Labour Party, for example.

What is particularly disturbing about the increase in political violence in countries like Britain and the US is that democratically elected leaders are actively encouraging it. President Donald Trump calls the press “the enemy of the people”; he urged supporters to “knock the crap” out of critics at one of his rallies; and he told four congresswomen of color to go back to where they came from (all but one was born in the US). More recently, Trump indirectly threatened violent retaliation against the anonymous whistleblower who exposed his efforts to persuade Ukraine’s leader to dig up damaging information about former Vice President Joe Biden, a leading candidate to challenge him in the 2020 election, and about Biden’s son, Hunter Biden. It is no surprise that a New Jersey police chief who said that Trump was “the last hope for white people” apparently took such incitement to heart, allegedly slamming a black teenager’s head into a doorjamb.

UK Prime Minister Boris Johnson is a smoother, more educated operator than Trump, but he, too, refuses to stop calling opponents of his Brexit policy traitors, or collaborators with foreign powers. A bill that would allow Parliament to stop a no-deal Brexit is, in Johnson’s words, a “surrender bill.” When MP Paula Sherriff criticized the prime minister’s language in Parliament, mentioning that MPs are frequently subjected to death threats and abuse from people using such words, he spat back that he had “never heard such humbug in all [his] life.”

The danger of this kind of rhetoric is not only that it makes violent people feel free to act on their brutal impulses. After all, if the president or prime minister says there are traitors in our midst, it is not only permissible to attack them; it is our patriotic duty. Nor is the use of abusive language just a matter of incivility – a common occurrence in democratic discourse, on all sides, despite informal rules (“my honorable friend”) to disguise it.

The most serious consequence of injecting violence into politics, even if only in words, is that it does severe damage to liberal democracy. A representative democracy can function properly only if political opponents don’t behave as though they were mortal enemies. Argument and compromise are how politicians must try to defend their constituents’ interests. But you cannot compromise with an enemy or a traitor, any more than a religious person can compromise over something he holds sacred.

There are many reasons why even the oldest democracies, such as the US and the UK, are increasingly riven by tribal hatreds. Politics is now less about interests than about culture, identity, and furious emotions stirred up in the endless echo chambers of the Internet. Not all of this is the fault of politicians. But when political leaders deliberately exploit these rifts and whip up hostile emotions even further, they do immense harm to the institutions that guarantee people’s freedom and safety.

It is hard to know whether violence will abate once the likes of Trump, Johnson, Modi, and Bolsonaro are gone. It will obviously depend on who comes next. But once people feel licensed to violate all norms of civilized behavior, because the highest political leaders have already done so, it will be difficult to reverse. The ghastly irony of our times has been that the very people who promised to make their countries great again have done the most to destroy what made them great in the first place.

When Knowledge is Powerless

Is Salafism making comeback in Egypt?