The Wisdom of Nokia's Dumbphone 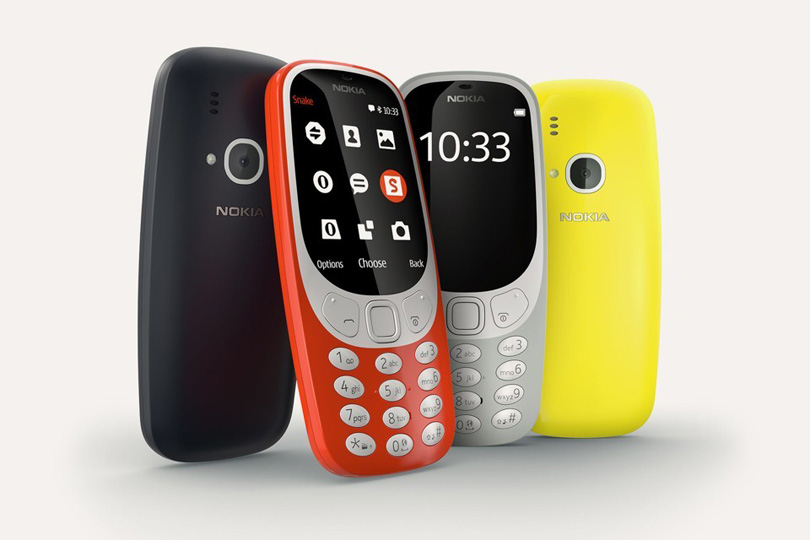 The smartphone’s ubiquity has made it boring and oppressive. A new, retro handset opens the door to a different future

They weighed heavy in pockets and jackets and bags, for they were thick and bulky, not lithe and narrow. Harried professionals never clutched one ostentatiously to say silently, “I’ve got better things to do than listen to this pitch or order this coffee.” Fashionable youth never dangled one nonchalantly from fingers as a flirty pique. Nothing was less sexy or less useful than a cell phone.

How is it possible, then, that Nokia has announced an updated edition of one of its most popular phones of the early aughts, the 3310? In short, because nothing has become less sexy or less useful than a smartphone.

First released in 2000, the Nokia 3310 emerged during the Cambrian explosion of mobile devices. Fashionless black bricks crossed the paths of colorful, candy-bar handsets. Slim, black Ericsson flip-phones shared airport security bins alongside silvered Motorola clamshells. WAP-enabled “feature phones” offered rudimentary, useless access to the internet, while the fat fingers of government officials and corporate executives mashed the keys of BlackBerry 957s and Treo 180s. Teens thumb-typed too—but texts instead of emails, on Danger Hiptops. The Nokia N-Gage even tried, and failed, to merge the mobile handset with the portable game system. Over the first half-decade of mass-market mobile devices, everything was attempted and nothing was holy.

In retrospect, the story of all these devices’ downfall is an obvious one. BlackBerry and Palm had failed to guess that smartphones would appeal to a general audience, not just to business users. They’d also mistaken the physical keyboard for a requirement. And all the rest of them, flip or clamshell or candy-bar, had assumed that phone calls and text messages would define portable handheld computing.

Instead, in 2007, Apple made a general-purpose touch-interface computer in the form of a thin glass rectangle, which others have copied and adapted ever since. 10 years later all anyone does, pretty much, is stroke and fondle one of these things, all day long. And for the privilege, consumers pay big bucks, continuously, to keep up with planned obsolescence reinvented as seasonal fashion.

The shame of a habit can only emerge once it has reached ubiquity. Even though the risk of compulsive obsession with smartphones was clear halfway into their ten-year life, the trauma of that obsession is only starting to dawn on people.

There are reasons. Years of odious abuse on services like Twitter and Reddit have finally mestastasized into resigned admission. The logic of amplifying information based on popularity, as Google and Facebook do, has finally revealed its obvious downsides. The demand of constant, unceasing attention from apps like Snapchat and games like Candy Crush Saga has begun to feel like the unpaid labor it always was.

For years, internet-driven, mobile computing technology was heralded as either angel or devil. Only recently has it become possible to admit that it might be both. Cigarettes, after all, produce pleasure even as they slowly kill.

Given the rising angst of a society run by technology, Nokia might have picked the perfect time to introduce an antidote to the smartphone. But even under today’s conditions, it is tempting to see the new Nokia 3310 merely as another example of retro nostalgia. Ha-ha, what if you could get a dumbphone instead? It would pair perfectly with a milk crate full of vinyl albums. But it’s also possible that the 3310 marks the start of a new period of technological mobility. One that offers a sense of how even the most entrenched technological habits might yet turn out differently.

Phones like the Nokia 3310 never went fully extinct, despite the geological devastation of the iPhonecene. Thanks to their low cost, feature phones have remained popular in the developing world, where they have always been more common than traditional computers. Even in sub-Saharan Africa, smartphones only overtook feature phones sales in the last two years. HMD Global, the Finnish company that licensed Nokia technology and branding back from Microsoft sees more opportunity in these markets. Late last year, the company unveiled two new, $25 feature phone models, marketed to the billions of feature phone users in Europe, the Asia Pacific, India, the Middle East, and Africa.

Since the iPhone and Android rose to prominence, high-quality, reliable alternatives to smartphones have all but disappeared in the developed world. And where they remained, they have become so uncool as to make their adoption grounds for public shame.

But there are reasons to prefer a phone as a portable communications tool instead of a compulsive, general-purpose computer. Some of those reasons recall the original uses of the cell phone. When it first became generally popular in the late 1990s, mobile handsets often were bought as insurance against surprises or emergencies. People tossed them into automobile glove boxes, or carried them in pockets or purses only when the perception of risk or the need for coordination seemed required. Those concerns persist, especially now that people have become accustomed to being able to reach one another immediately and constantly. An inexpensive, reliable handset with a long-lasting battery might turn the Nokia 3310 a second phone, or a backup phone.

Another possible use is domestic. Once mobile phones became ubiquitous, many households gave up on home phone lines. By 2012, more than half of American homes didn’t have a landline. But the decline of the home phone also had unexpected consequences. Smartphones are personal devices, while the home phone line is a shared resource. As mom, dad, and all of the kids began getting their own, private communication tools, the phone as a point of entry to the household disappeared. But there’s reason to imagine a future in which the telephonic hearth renews. A cheap, appealing device like the Nokia 3310 could be left on the kitchen counter, ready to cry its loud, familiar ring as a means of reaching the home in general, rather than one of its occupants. Anyone who has missed a service call because the iPhone was on silent on the nightstand, or awkwardly passed around a personal device with grandma and grandpa on the other end, might willingly add another line to avoid such discomforts.

Then there’s the matter of smartphones’ overall sameness. Last year, my colleague Robinson Meyer profiled the Caterpillar S60, a smartphone designed by the heavy equipment company, built for construction work. Rugged and reinforced, it can be dropped from heights, immersed, and exposed to the elements. Rob rightly called the future that the Caterpillar S60 represents one in which “smartphones become unboring.” Boredom ends not thanks to the absolution of some newfangled feature that everyone needs, but from the specific features useful in particular circumstances.

The simultaneous fragility and expense of smartphones also helps explain why the Nokia 3310 might appeal even to consumers who can afford better. Speaking to The Guardian, the industry analyst Ben Wood cited the “festival phone” and the “backup phone” as possible contexts for the handset. When working in the yard, camping, or white-water rafting, the risk of damaging or destroying a $750 smartphone makes carrying one seem foolish. But what other choice is there? Likewise, when attending a concert or sporting event, thin smartphones might risk getting lost or stolen. In these instances, a $50 Nokia 3310 offers clear benefit.

Security and privacy offer more reasons to consider a dumbphone. Smartphones are sophisticated tracking devices. GPS and motion sensors, along with the always-on internet servicing dozens of apps doing unspecified processing in the background make these devices encyclopedias of their users’ actions and behavior. While the cellular network can always be used to determine a handset’s location, the granularity and accuracy of its physical tracking is limited compared to a GPS device. And given recent examples of border agents demanding access to travelers’ smartphones, feature phones might become standard equipment for frequent travelers.

Upon arrival, the feature phone might even prove a more useful tool than the smartphone to the jetsetter. How much energy do business travelers expend managing the power and network needs of their smart devices at meetings or conferences? True, the Nokia 3310 can’t direct owners around an unfamiliar city on a map, or allow them to live-tweet an event. But perhaps the need to keep a smartphone powered and connected to the network—not to mention the compulsion to use all those apps—would be reduced given a second device meant solely for communication.

The Nokia 3310 might also offer an alternative to smartphones for younger kids. It’s much easier for a preteen to signal a pickup by phone or text than to try to guess when and where to arrive. Some parents, myself included, try to pawn off cheap, basic phones to children as they become old enough to pursue schedules outside the home. But these tools are devoid of style. They are embarrassments, without appeal, and as such they become more likely to go unused or left at home. Should Nokia rekindle the cultural allure of the feature phone, perhaps its potential as a communications tool absent the urges of the smartphone will inspire parents to stop handing over these glass-and-metal temptations to their progeny without a second thought.

It might be premature to announce the end of humanity’s love affair with the smartphone. But the relationship’s cracks are surely showing. Some have immediate consequence. Apps have contributed to a huge spike in traffic accidents and deaths, as more and more people attempt to operate finicky handheld devices while driving. The partial-reinforcement techniques baked into today’s apps and games has become more apparent to users, who seem increasingly resigned to services they also feel no option to quit. And the uniformity in design of devices has arrested their future potential. Every year another glass rectangle, affording no more or less than it promises, which is more of the same.

The smartphone’s conquest is definitive and complete. A decade after its form solidified, the contemporary citizen of the developed world has almost no choice but to own and operate one. And yet, the joy and the utility of doing so has declined, if not ceased entirely.

People called them called cell phones, or mobile phones, depending on the home continent of their carriers. “Cell phone” highlighted the empty space between communication nodes—the cells—common to North America. In Europe, where the land is flat, the nations small, and the coverage ubiquitous, versatility took center stage: the capacity to remain connected while in on the move thanks to a “mobile.” These name describe dreams as much as reality. Likewise, “smartphone” is wishful thinking as much as anything. A skeleton key, an aluminum genius, a singular device that deploys software, connectivity, portability, and design to end, finally and definitively, the ideal purpose of universal computation.

But the truly smart actor does not use one single tool, but the right tool for the job. That the right tool might always be one forged in software and activated via touch and gesture always should have been as preposterous as it is now only starting to seem. The Nokia 3310 isn’t the answer to the future of mobile telecommunications, or computing, or digital fashion, or any of the other domains in which the iPhone has pulled the wool over collective eyes. Instead it can be just what it is: one specimen in an ecosystem of technical diversity. The future promise of Nokia’s device isn’t this particular device, but the alternate, unthought future it represents.