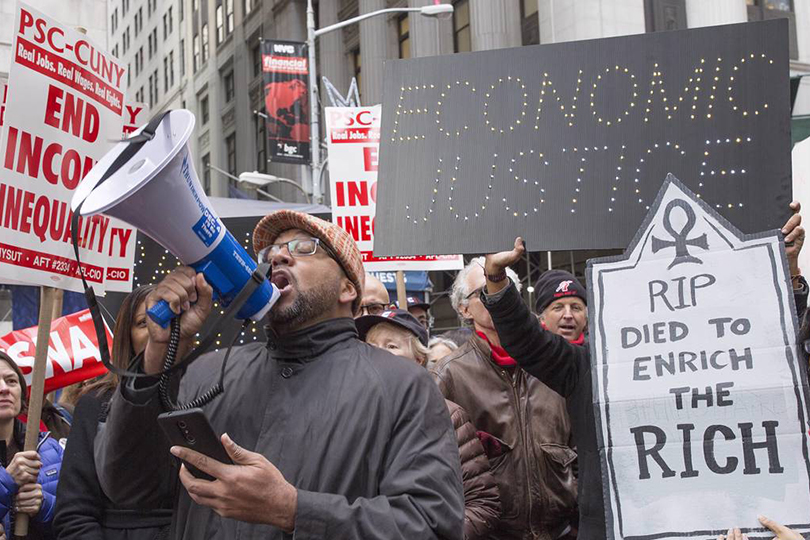 The historic protests sweeping America were long overdue, not just as a response to racism and police violence, but also as a revolt against entrenched plutocracy. With a growing number of Americans falling into unemployment and economic insecurity, while major corporations take bailouts and slash labor costs, something had to give.

The mass protests following the killing of George Floyd by a Minneapolis police officer are about systemic racism and police brutality in the United States, but also so much more. Those who have taken to the streets in more than 100 American cities are channeling a broader critique of President Donald Trump and what he represents. A vast underclass of increasingly indebted, socially immobile Americans – African-Americans, Latinos, and, increasingly, whites – is revolting against a system that has failed it.

This phenomenon is not limited to the US, of course. In 2019 alone, massive demonstrations rocked Bolivia, Chile, Colombia, France, Hong Kong, India, Iran, Iraq, Lebanon, Malaysia, and Pakistan, among other countries. Though these episodes each had different triggers, they all reflected resentment over economic malaise, corruption, and a lack of economic opportunities.2

The same factors help to explain populist and authoritarian leaders’ growing electoral support in recent years. After the 2008 financial crisis, many firms sought to boost profits by cutting costs, starting with labor. Instead of hiring workers in formal employment contracts with good wages and benefits, companies adopted a model based on part-time, hourly, gig, freelance, and contract work, creating what the economist Guy Standing calls a “precariat.” Within this group, he explains, “internal divisions have led to the villainization of migrants and other vulnerable groups, and some are susceptible to the dangers of political extremism.”

The precariat is the contemporary version of Karl Marx’s proletariat: a new class of alienated, insecure workers who are ripe for radicalization and mobilization against the plutocracy (or what Marx called the bourgeoisie). This class is growing once again, now that highly leveraged corporations are responding to the COVID-19 crisis as they did after 2008: taking bailouts and hitting their earnings targets by slashing labor costs.

One segment of the precariat comprises younger, less-educated white religious conservatives in small towns and semi-rural areas who voted for Trump in 2016. They hoped that he would actually do something about the economic “carnage” that he described in his inaugural address. But while Trump ran as a populist, he has governed like a plutocrat, cutting taxes for the rich, bashing workers and unions, undermining the Affordable Care Act (Obamacare), and otherwise favoring policies that hurt many of the people who voted for him.

Before COVID-19 or even Trump arrived on the scene, some 80,000 Americans were dying every year of drug overdoses, and many more were falling victim to suicide, depression, alcoholism, obesity, and other lifestyle-related diseases. As economists Anne Case and Angus Deaton show in their book Deaths of Despair and the Future of Capitalism, these pathologies have increasingly afflicted desperate, lower skilled, un- or under-employed whites – a cohort in which midlife mortality has been rising.

But the American precariat also comprises urban, college-educated secular progressives who in recent years have mobilized behind leftist politicians like Senators Bernie Sanders of Vermont and Elizabeth Warren of Massachusetts. It is this group that has taken to the streets to demand not just racial justice but also economic opportunity (indeed, the two issues are closely intertwined).

This should not come as a surprise, considering that income and wealth inequality has been rising for decades, owing to many factors, including globalization, trade, migration, automation, the weakening of organized labor, the rise of winner-take-all markets, and racial discrimination. A racially and socially segregated educational system fosters the myth of meritocracy while consolidating the position of elites, whose children consistently gain access to the top academic institutions and then go on to take the best jobs (usually marrying one another along the way, thereby reproducing the conditions from which they themselves benefited).

These trends, meanwhile, have created political feedback loops through lobbying, campaign finance, and other forms of influence, further entrenching a tax and regulatory regime that benefits the wealthy. It is no wonder that, as Warren Buffett famously quipped, his secretary’s marginal tax rate is higher than his.

Or, as a satirical headline in The Onion recently put it: “Protesters Criticized for Looting Businesses Without Forming Private Equity Firm First.” Plutocrats like Trump and his cronies have been looting the US for decades, using high-tech financial tools, tax- and bankruptcy-law loopholes, and other methods to extract wealth and income from the middle and working classes. Under these circumstances, the outrage that Fox News commentators have been voicing over a few cases of looting in New York and other cities represents the height of moral hypocrisy.

It is no secret that what is good for Wall Street is bad for Main Street, which is why major stock-market indices have reached new highs as the middle class has been hollowed out and fallen into deeper despair. With the wealthiest 10% owning 84% of all stocks, and with the bottom 75% owning none at all, a rising stock market does absolutely nothing for the wealth of two-thirds of Americans.

As the economist Thomas Philippon shows in The Great Reversal, the concentration of oligopolistic power in the hands of major US corporations is further exacerbating inequality and leaving ordinary citizens marginalized. A few lucky unicorns (start-ups valued at $1 billion or more) run by a few lucky twenty-somethings will not change the fact that most young Americans increasingly live precarious lives performing dead-end gig work.

To be sure, the American Dream was always more aspiration than reality. Economic, social, and intergenerational mobility have always fallen short of what the myth of the self-made man or woman would lead one to expect. But with social mobility now declining as inequality rises, today’s young people are right to be angry.

The new proletariat – the precariat – is now revolting. To paraphrase Marx and Friedrich Engels in The Communist Manifesto: “Let the Plutocrat classes tremble at a Precariat revolution. The Precarians have nothing to lose but their chains. They have a world to win. Precarious workers of all countries, unite!”