Testing Iraq’s Ability to Crack Down on Anti-U.S. Terrorism 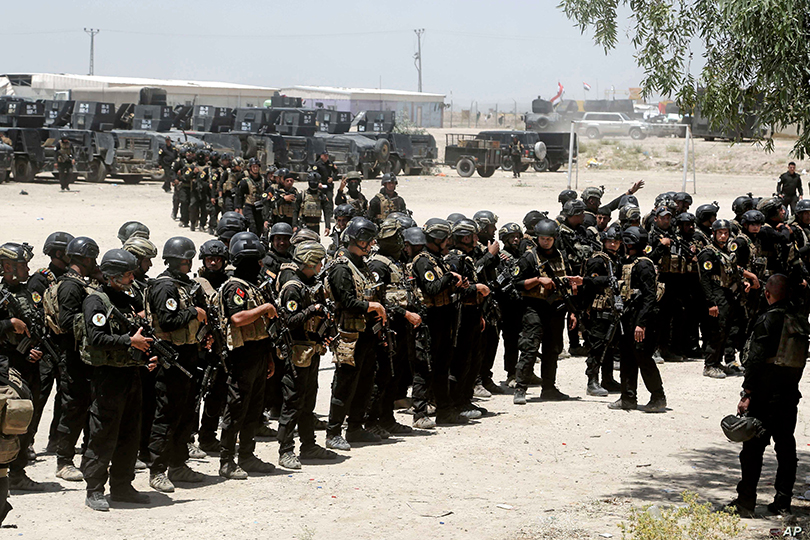 On June 25, troops from Iraq’s Counter Terrorism Service (CTS) arrested fourteen members of Kataib Hezbollah (KH) as they set up rocket attacks on Baghdad airport and the U.S. embassy. In response, the leadership of KH—a U.S.-designated terrorist organization and the top Iran-backed militia in Iraq’s Popular Mobilization Forces (PMF)—flexed their muscles in Baghdad’s International Zone, demanding that the government release the men into their custody. The incident shows that the Iraqi government is willing but not yet able to protect itself from powerful militias or enforce the rule of law and security sector reform.

EXPLAINING THE FLURRY OF ACTION

The CTS raid targeted a KH base in Dora, a district of Baghdad that sits south of the International Zone. A number of Iran-backed Shia militias have seized tracts of land in this area since 2003, often farms belonging to former members of Saddam Hussein’s regime.

Iraqi intelligence generated the evidence needed to secure a search and arrest warrant for the raid. The CTS has long employed an in-house judicial mechanism to allow for timely warrant-based raids; in this case, it was used to produce a legal order to prevent the rocket attack and detain any suspects at the site. This is the first time that the Iraqi government has tried and succeeded in foiling such an attack based on preemptive intelligence.

The arrests are extraordinary because of the impunity that KH has enjoyed in recent years, and it was inevitable that the group would push back. After the raid, KH operational commander Abu Fadak (also known as Abdul-Karim al-Zrejawi) pulled together a force of around 150 fighters in nearly thirty pickup trucks, with at least one carrying a 23 millimeter twin antiaircraft cannon and many others bearing armored machine-gun mounts. They drove to the prime minister’s residence and demanded the suspects be released to their custody.

In a compromise move, the prisoners were apparently placed under the custody of the PMF Security Directorate, nominally because they are PMF members and thus subject to their service’s military discipline. Yet the directorate is led by a KH commander, Abu Zainab al-Lami (Hussein Falah al-Lami), casting doubt on the motives behind the transfer. Prime Minister Mustafa al-Kadhimi has since called for all Iraqi security agencies to hold a joint armed services investigation of the case. If political pressure forces KH to respect the judicial committee mechanism, formal Iraqi military justice will decide the case rather than PMF internal discipline.

If the Iraqi government can hold its course and prosecute the suspects, the case would be an unprecedented formal identification of anti-U.S. violence as a terrorist offense against the Iraqi state. Prior to 2011, counterterrorism arrests of KH fighters were exceedingly rare and usually based on American intelligence that could not be provided as evidence in Iraqi courts. So-called “resistance activities” against U.S. and British personnel were characterized as non-terrorist acts in Iraqi prisoner amnesties. This situation hardly improved in subsequent years—after the U.S. mission in Iraq was renewed in 2014, not a single KH fighter was indicted for anti-U.S. terrorist acts, despite numerous rocket attacks that threatened, wounded, and killed Americans and Iraqis. Significantly, the current suspects were charged under Iraq’s counterterrorism statutes.

Given the incident’s potentially deep ramifications, KH may feel compelled to up the ante. The group has suffered one setback after another in recent months: reputational damage from its role in orchestrating protestor killings and disappearances; the deaths of Iranian Qods Force commander Qasem Soleimani (KH’s “godfather”) and Abu Mahdi al-Muhandis (the group’s Iraqi founder); U.S. and Israeli airstrikes on KH sites in Iraq and Syria; religious outcry against Abu Fadak’s promotion to replace Muhandis; and Kadhimi’s appointment as prime minister, which KH expressly forbade.

The group may therefore be highly sensitive to another humiliation; there are already signs that its equilibrium has been unsettled by the serial setbacks. KH appears more erratic and less disciplined than in the past, menacing Iraqi leaders by sending large gangs of fighters to the heart of the International Zone armed with assault rifles and even rocket-propelled grenades.

Notably, KH has a sizable military garrison inside that zone, totaling over two thousand fighters on any given day and easily reinforced on short notice. One of the group’s bases sits directly behind the prime minister’s headquarters; another is located inside the Republican Palace, the official receiving location for state visits. These posts are intended to intimidate the prime minister and have made it difficult for him to work out of either location.

If KH succeeds in shielding its fighters from justice, it will embarrass the Kadhimi government. Obvious parallels will be drawn to the July 2018 “Battle of Palestine Street” in Baghdad, when KH members were cornered with five stolen cars, fired their guns, and refused to surrender to police. During a subsequent standoff at a KH office, they would not surrender even to the interior minister himself, a senior figure in the Iran-backed Badr Organization. Instead, they were hidden from justice by the PMF Security Directorate.

The most effective security reform measures in Iraq are those conceived, executed, and explained by Iraqis, without any overt international involvement. In this case, the government fired a warning shot at KH, one that did not work entirely as hoped but still represents progress of a faltering variety. To help Baghdad continue making brave, sovereign decisions, Washington should undertake several reinforcing measures:

Encourage foreign governments to designate KH. Britain and other U.S. allies are leaning strongly toward designating the group, and U.S. officials should keep urging them in that direction, since it would fill a glaring gap in their designation lists. In London’s case, for example, KH is widely presumed to have perpetrated the March 11 rocket attack in Taji that killed a British soldier. The nature of the latest arrests might give Britain even greater impetus to designate, which could in turn spur like-minded moves in Europe.

Help Iraq ensure continuity of government. Any government’s first duty is to protect its own capacity to make independent decisions, but the Kadhimi government is struggling to find safe locations in which it can work without fear of being overrun by militias. Iraq needs strong encouragement and support to quickly develop a real security force for the International Zone and government center—one that is both willing and able to physically prevent militias from bringing heavy weapons into government facilities. International players can provide protective intelligence and encouragement through regular check-ins on the government’s security status.

Support the counterterrorism judiciary. Prime Minister Kadhimi has expressed the need to protect Iraq’s judges if rule of law reforms are to flourish. Accordingly, international players should scour their rule of law budgets and programs to find tangible, fast-track assistance options that can bolster Iraq’s special counterterrorism and anticorruption judges.

Hold KH accountable through the PMF framework. The manner in which KH secured the transfer of its men entailed openly identifying them as active-service PMF members. This nullifies the group’s frequent claim that rocket strikes and other “resistance” attacks are undertaken by group members who do not draw PMF salaries. As such, it opens the way for the Iraqi government to reduce KH salaries within the PMF, and to discipline, audit, and possibly disestablish the group’s PMF units (i.e., the 45th, 46th, and 47th Brigades).

Forensic support. The arrests will no doubt unearth a trove of evidence. Assuming this material is not handed back to KH like the suspects were, the United States should share its relevant knowledge on the group to help make sense of the new puzzle pieces. For instance, the suspects and captured materials will carry biometric signatures that could match other rocket attacks, including the lethal strikes conducted against U.S. personnel on December 27 and March 11. Over a dozen smartphones were reportedly seized in the raid, and various computers, hard drives, and GPS units may have turned up as well. All of this material could yield significant new insights into KH’s networks and communications. It might also provide proof that apparently “new” anti-U.S. umbrella movements such as Usbat al-Thaireen and Thar al-Muhandis are actually tied to KH.