Is Trump a Turning Point in World Politics? 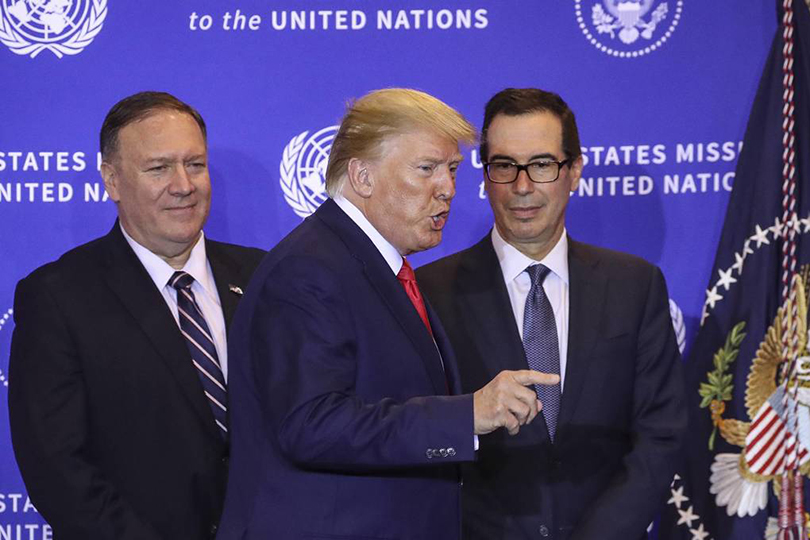 Will Donald Trump’s presidency mark a major turning point in world history, or was it a minor historical accident? Trump's electoral appeal may turn on domestic politics, but his effect on world politics could be transformational, particularly if he gains a second term.

As the United States enters the home stretch of the 2020 presidential election campaign, and with neither party’s nominating convention featuring much discussion of foreign policy, the contest between President Donald Trump and Joe Biden apparently will be waged mainly on the battleground of domestic issues. In the long run, however, historians will ask whether Trump’s presidency was a major turning point in America’s role in the world, or just a minor historical accident.

At this stage, the answer is unknowable, because we do not know if Trump will be re-elected. My book Do Morals Matter? rates the 14 presidents since 1945 and gives Trump a formal grade of “incomplete,” but for now he ranks in the bottom quartile.

Top-quartile presidents like Franklin D. Roosevelt saw the mistakes of America’s isolationism in the 1930s and created a liberal international order after 1945. A turning point was Harry S. Truman’s post-war decisions that led to permanent alliances that have lasted to this day. The US invested heavily in the Marshall Plan in 1948, created NATO in 1949, and led a United Nations coalition that fought in Korea in 1950. In 1960, during the administration of Dwight D. Eisenhower, the US signed a new security treaty with Japan.

Over the years, Americans have had bitter divisions – among themselves and with other countries – over military intervention in developing countries like Vietnam and Iraq. But the liberal institutional order continued to enjoy broad support until the 2016 election, when Trump became the first nominee of a major party to attack it. Trump was also a skeptic about foreign intervention, and while he has increased the defense budget, he has used force relatively sparingly.

Trump’s anti-interventionism is relatively popular, but his narrow, transactional definition of US interests, and his skepticism about alliances and multilateral institutions, is not reflective of majority opinion. Since 1974, the Chicago Council on Global Affairs has asked the public whether America should take an active part or stay out of world affairs. Roughly a third of the American public has been consistently isolationist, reaching a high point of 41% in 2014. Contrary to conventional wisdom, however, 64% favored active involvement by the time of the 2016 election, and that number rose to a high of 70% by 2018.

Trump’s election and his populist appeal rested on the economic dislocations that were accentuated by the 2008 Great Recession, but even more on polarizing cultural changes related to race, the role of women, and gender identity. While he didn't win the popular vote in 2016, Trump successfully linked white resentment over the increasing visibility and influence of racial and ethnic minorities to foreign policy by blaming economic insecurity and wage stagnation on bad trade deals and immigration. As president, however, according to former national security adviser John Bolton, Trump had little strategy, and his foreign policy was driven primarily by domestic politics and personal interests.

Just before Trump took office, Martin Wolf of The Financial Times described the moment as “the end of both an economic period – that of Western led globalization – and a geopolitical one, the post-cold war ‘unipolar moment’ of a US-led global order.” In that case, Trump may prove to be a turning point in American and world history, particularly if he is re-elected. His electoral appeal may turn on domestic politics, but his effect on world politics could be transformational.

The current debate over Trump revives a longstanding question: Are major historical outcomes the product of political leaders’ choices, or are they largely the result of social and economic forces beyond anyone’s control? Sometimes, history seems like a rushing river whose course is shaped by precipitation and topography, and leaders are simply ants clinging to a log in the current. In my view, they are more like white-water rafters trying to steer and fend off rocks, occasionally overturning and sometimes succeeding in steering to a desired destination.

For example, Roosevelt was unable to bring the US into World War II until the Japanese attack on Pearl Harbor, but his moral framing of the threat posed by Hitler, and his preparations to confront that threat, proved crucial. After World War II, the US response to Soviet ambitions might have been very different had Henry Wallace (who was replaced as vice president on the Roosevelt ticket for the 1944 election), not Truman, been president. After the 1952 election, an isolationist Robert Taft administration or an assertive Douglas MacArthur presidency might have disrupted the relatively smooth consolidation of Truman’s containment strategy, over which Eisenhower presided.

John F. Kennedy was crucial in averting a nuclear war during the Cuban Missile Crisis and then signing the first nuclear arms control agreement. But he and Lyndon B. Johnson mired the country in the unnecessary fiasco of the Vietnam War. In the century’s last decades, economic forces caused the erosion of the Soviet Union and Mikhail Gorbachev’s actions accelerated the Soviet bloc’s collapse. But Ronald Reagan’s defense buildup and negotiating skill, and George H.W. Bush’s skill in managing crises, played a significant role in bringing about a peaceful end to the Cold War, with a reunified Germany in NATO.

In other words, leaders and their skills matter – which also means that Trump cannot be easily dismissed. More important than his tweets are his weakening of institutions, alliances, and America’s soft power of attraction, which polls show has declined since 2016.

Machiavellian and organizational skills are essential for successful US presidents, but so is emotional intelligence, which leads to self-awareness, self-control, and contextual insight, none of which is evident with Trump. His successor, whether in 2021 or 2025, will confront a changed world, partly because of Trump’s idiosyncratic personality and policies. How great that change will be depends on whether Trump is a one-term or two-term president. We will know after November 3 whether we are at a historical turning point or at the end of an historical accident.