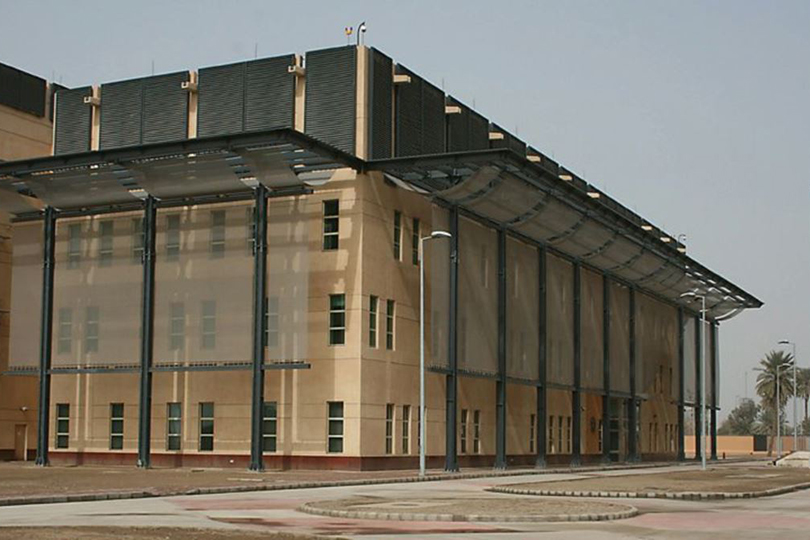 Although halting the escalation of militia attacks on American personnel is crucial, simply evacuating the Baghdad embassy and downscaling the bilateral relationship would allow Iran to snatch victory from the jaws of defeat.

On September 20, Secretary of State Mike Pompeo reportedly warned the Iraqi government that unchecked militia attacks could spur the United States to shutter its embassy and launch powerful strikes on Iran-backed militia leaders. Since then, Iraqi officials and even some militia figures have scrambled to placate Washington, with various armed groups publicly distancing themselves from attacks on diplomatic facilities. At the same time, however, the warning shocked an embattled Iraqi government that had served up some powerful blows against Iranian proxies in recent weeks, including the September 17 arrest of suspected militia financier Bahaa Abdul-Hussein, who controls a multi-billion-dollar e-payment service.

The episode underlines the corrosive effect that even nonlethal militia harassment attacks can have on the bilateral relationship, an issue that the author has previously provided analysis and updates on in July, March, and February. Prior to the most recent incidents outlined in the list below, relations had been improving markedly, with Prime Minister Mustafa al-Kadhimi visiting Washington in August and the Trump administration agreeing to start reducing U.S. forces from 5,200 to a sustainable level of around 3,000. To defuse any tensions that may sprout from Pompeo’s stark warning, the next step is to agree on practical measures to reassure Washington that the Iraqi government is providing as much protection as it can realistically muster at this time—keeping in mind that not even the U.S. military could completely stop such attacks when it had 165,000 troops on the ground.

The number and scope of operations against American, coalition, and Iraqi targets has expanded recently:

• Logistical convoys. The U.S. embassy and coalition military forces rely on the import of many pieces of equipment and consumables, some of which are destined for disbursement to Iraqi security forces. Attacks on the Iraqi truck convoys that transport this materiel increased from 14 in the first quarter of 2020 to 27 in Q2 and 25 in Q3. The quality of these attacks has increased as well, including the use of passive infrared triggers for more accurate targeting and, in recent days, daisy-chained explosively formed penetrators (EFPs).

• Foreign security details. On August 26, a roadside bomb damaged a UN World Food Programme vehicle in the operating area of an Iran-backed militia east of Mosul, wounding one occupant. On September 15, another roadside bomb exploded alongside a British embassy armored vehicle in Baghdad, causing no injuries. These attacks came almost a year after the last such bombings: a 2019 spate of militia attacks on oil company convoys in Basra.

• Rockets and drones. U.S. targets suffered 27 rocket and drone attacks in Q3, higher than Q2 (11 attacks) and Q1 (19). No U.S. casualties were caused in this quarter’s attacks; the last U.S. fatalities occurred on March 11. Yet the most recent strikes have been more accurate, aimed to land inside the U.S. embassy grounds. On September 15, the embassy’s counter-rocket, artillery, and mortar (C-RAM) system destroyed a salvo of rockets projected to strike the complex. As for drones, one was found on a roof near the embassy on July 22, apparently readied for attack with a bomb equivalent to a medium (81-82 mm) mortar shell. On September 2, a similar combination was used to attack the G4S security company at Baghdad airport, striking very accurately but causing no casualties. Some armed groups have accused this U.S.-British company of providing intelligence that pinpointed the location of Iranian general Qasem Soleimani and militia kingpin Abu Mahdi al-Muhandis, who were killed by a U.S. airstrike near the airport on January 3.

The above review paints a picture of a very active Iran-backed militia threat that is evolving in worrisome ways. The United States does not want to go through another period like that seen in December-January, when its embassy was besieged, major new deployments had to be made to the region, and the risk of broader conflict with militias and Iran was quite real. The Trump administration understandably wants to break the current momentum, since the last time such a surge of attacks occurred, the results were the death of an American in December, U.S. airstrikes, mob attacks on the embassy, the forceful but risky decision to target Soleimani and Muhandis, and an Iraqi parliamentary motion to remove U.S. forces. Pompeo’s warning might also have been spurred by classified information.

Whatever its impetus, the U.S. threat to close the embassy is a very problematic policy option, notwithstanding its immediate utility in galvanizing Iraqi attention on militia issues. Shuttering the embassy is the exact outcome that every Iran-backed militia dreams of achieving. It would be a propaganda victory of epic proportions for Tehran and its proxies, undercutting all of the progress achieved in Iraq since Soleimani and Muhandis were killed. It would also represent an even more complete withdrawal from Iraq than the one undertaken by the Obama administration in 2011, which helped pave the way for al-Qaeda’s reemergence as the Islamic State and, later, militia control over broad swaths of the Iraqi state. Not only would all U.S. diplomatic and military operations in Iraq end, but all other coalition operations would cease as well given their dependence on the U.S. presence. Many foreign powers would likely mimic Washington’s full departure—except for Iran, Russia, and China. In no scenario would this outcome serve U.S. interests.

Washington should therefore avoid invoking such an extreme measure in the future, instead working with the Kadhimi government on other kinds of intensified response options. In particular, to better protect the embassy when U.S. threat warnings indicate impending attacks, Iraqi forces could temporarily close parts of the International Zone and reinforce protection there. Similar arrangements could be made for the airport and the main airport road under certain conditions. Although completely halting rocket fire is unrealistic anytime soon, the embassy was built to withstand such attacks and is protected by the potent C-RAM system, which the Iraqi government allows to operate over the capital despite the extreme noise and occasional stray shells it generates.

Moreover, if U.S. officials have specific intelligence about a new militia threat—say, the introduction of advanced precision rocket systems—they should share this data on condition that Iraq quickly mounts an operation against it. Prime Minister Kadhimi is still the titular head of the highly capable Iraqi National Intelligence Service, and partner nations regularly trust him and his inner circle (largely INIS personnel) with sensitive information.

If the U.S. government needs to see visible signs of Iraq pushing back on militias, Baghdad’s action should be purposeful in some broader sense than just placating Washington. Rather than goading Iraqi officials into an over-ambitious “rush to failure” (e.g., attempting a military takedown of a key militia), the smartest approach is to help them take back the International Zone. Incrementally removing militias from this key piece of real estate would be deeply symbolic on a national level and, more important, protect the most sensitive Iraqi, U.S., and coalition facilities. Gradually weeding thousands of militiamen and heavy weapons out of the zone would be highly confrontational, but at least it would be worth the risk—unlike arresting a few individual militia leaders, which would have limited impact. Kadhimi is already making many positive changes to the zone’s security arrangements with U.S. assistance, so the moment is ripe for a “neighborhood by neighborhood” effort to remove fighters and weapons. Washington should rally vocal support for such a move, not only among international players with embassies in the zone, but also among moderate Shia, secular, Kurdish, and Sunni political blocs in Iraq.

While waiting for these and other measures to be implemented, the embassy is quite capable of protecting itself, as it did during last December’s showdown. Moreover, the U.S. presence has been decreased and consolidated since then—it is now concentrated at six sites rather than fourteen, each with active defenses against missiles, rockets, and drones. This multi-billion-dollar investment gives brave American personnel the resilience to weather harassment fire when unavoidable, and although the protective umbrella does not extend to supply convoys, those transport functions are fulfilled by equally brave Iraqis, not Americans. Securing the International Zone and starting the campaign to push militias out would give the embassy even firmer ground to stand on as it helps Baghdad hold fast against Iranian threats.