Washington Confuses Tactics with Strategy: The Perils of Shuttering the U.S. Embassy in Baghdad 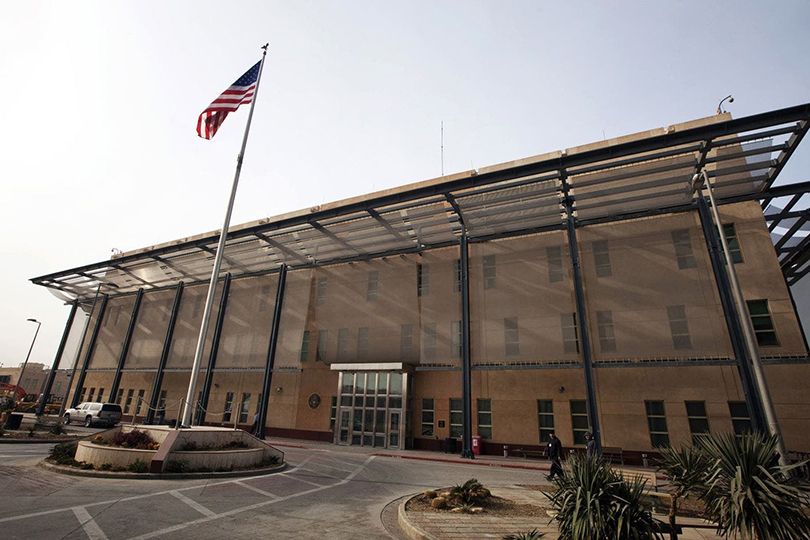 The threat to close the embassy in Baghdad delivered by Secretary of State Mike Pompeo has plunged the U.S.-Iraq relationship to a shocking low from the airy heights of Prime Minister Mustafa al-Kadhimi’s August visit to Washington. That visit signaled a significant course adjustment in the U.S.-Iraq relationship, with clear messaging by the Trump administration denoting a shift from its singular focus on Iran and the Islamic State (IS) toward a normalized, full-spectrum partnership with the Iraqi government and the Iraqi people.

Yet over the course of one week, the administration took two steps freighted with meaning: granting Iraq a 60-day waiver from U.S. sanctions on purchases of Iranian electricity and gas (contrasting sharply with the 120-day waiver issued in May), followed by the threat to shutter the embassy. Both moves signaled U.S. frustration with continuing attacks on U.S. facilities and personnel by Iran-backed Iraqi militias. The abrupt lofting of coercive tools vis-à-vis the warm embrace of an Iraqi leader only a month earlier denoted the administration’s return to narrowly dealing with Iraq in the framework of its maximum pressure campaign against Iran.

The irony in this policy about-face is that it risks undermining and alienating the first Iraqi leader whose vision for Iraq is aligned with Washington’s objectives: a politically and economically reformed country, with a reduced role for Iran. The two sides differ on timeline: Kadhimi believes in incremental progress while the Trump administration wants immediate results. Since May, Kadhimi has worked to (1) curb militia influence through methodical exercise of his power to hire and fire, (2) bolster reliable security forces, and (3) challenge corrupt financial networks. His end game is free and credible elections next year, which will usher in a new class of leaders willing to challenge the militia-run parallel state. Kadhimi prefers the sustainable outcome—that is, that Iran and its network of corrupt politicians and militias lose at the ballot box in the medium term—over the risk of near-term violence and a return to sectarian civil war.

Iran’s activities are under the microscope more sharply than ever in Iraq. How the administration plays its next steps will lay bare the realm of possibility in countering militia power. The administration’s ultimatum energized debate across the Iraqi political spectrum, propelling other foreign diplomatic missions to voice concern about militia attacks. But Washington will also need to be mindful not to paint itself into a self-defeating “retreat” from Iraq.

STRIVING FOR “NORMAL” IN THE U.S.-IRAQ RELATIONSHIP

During his visit, Kadhimi urged Americans not to view Iraq as a battlefield in the U.S.-Iran conflict but as a regional hub for mutually beneficial relationships throughout its neighborhood. The U.S. and Iraqi teams developed the framework for a right-sized relationship, in which civilian—not military—cooperation would anchor a strategic partnership, with ties across trade, business, and cultural domains. The statements and agreements in August represented positive steps toward such a relationship, and very deliberately aligned with the demands for change emanating from Iraq’s massive 2019 protests against corruption, government incompetence, and Iran’s predatory influence in the country.

This shared strategic vision for civilian partnership will require the commitment of professionals from both countries. For U.S. engagement, the irreplaceable platform is the embassy. Security for that platform is also a prerequisite. But closure should be a last step—and only after every other measure and effort is exhausted.

The United States should demand that Iraq meet its international and diplomatic obligations to secure the embassy and its staff. But doing so requires coordinating with the Kadhimi government, putting pressure on fence-sitting political leaders in Baghdad and Erbil, and getting support from counter-IS coalition allies and regional states. Kadhimi cannot risk confrontation politically or militarily without confidence that he has domestic and international support. Iraqi security forces will likewise be more assertive if reassured of foreign backing.

An embassy is the primary platform for pursuing U.S. interests in a foreign country, working to make sense of both sudden developments and subtle shifts in that country’s political and security environment. Embassy staff and an empowered ambassador enable engagement with a country’s officials and public. Additionally, the embassy is the locus through which U.S. policies and programs are implemented, including security assistance, civil society and economic engagements, and consular services. These core embassy functions will not meaningfully endure without an embassy in Baghdad. Moreover, once the embassy closes, its reestablishment will require new negotiations, timelines, and costs.

In the Iraq context, the 2018 closure of the U.S. consulate in Basra offers a revealing corollary: there, the United States lost critical visibility on the fissures that have roiled Iraq’s southern Shia heartland, the center of the country’s energy wealth. Without its window into the south, the United States lacked insight into last year’s protest movement and its hardy leaders, many of whom were targeted after agitating against Iraq’s corrupt elite, as well as militias and their Iran backers.

• The Iraqi reform agenda embraced by the United States will wither—and with it prospects for Iraq’s recovery and stability. During Kadhimi’s visit to Washington, the United States and Iraq agreed on a rich menu of bilateral cooperation that covered economic, energy, health, education, cultural relations, security, and counterterrorism concerns. Moot without a U.S. embassy, this ambitious agenda supports the recovery and stability of Iraq and provides the connective tissue for a long-term relationship.

• Iran and its allies will be emboldened and seek new U.S. targets. Notwithstanding Iraq’s aversion to becoming a theater for U.S.-Iran conflict, Iran’s leaders will view the U.S. embassy closure as both a long-sought victory and a vindication of its cultivation of militias and proxies. Given that local security forces were unable to counter the show of force at the prime minister’s residence by Kataib Hezbollah in June, the visual for the American diplomatic withdrawal will be empty embassy grounds overrun by militias and decorated by their flags. Washington will have thus encouraged more of the same attacks—not fewer—and perhaps not just in Iraq.

• The U.S. military presence will not be politically sustainable if the Islamic State is not defeated. U.S. officials are notably silent on the future of the military mission in Iraq—ever a political wedge issue—despite the possible embassy closure. Such silence stems from the fact that both Iraqi and U.S. officials recognize the mutual benefit of training, advising, and equipping the Iraqi security forces to continue fighting IS. Further, Iraqi and U.S. officials appreciate that the U.S. military provides the intelligence and logistics platform necessary for NATO and others to sustain their military missions. Kadhimi has deflected pressure to end the U.S. military mission by highlighting the strategic benefits of the broader U.S. partnership. Closing the embassy removes the fundamental premise of Kadhimi’s argument, thereby exposing him politically.

• The U.S. private sector will be deterred from taking a bet on Iraq. Since 2003, the U.S. and Iraqi governments have unsuccessfully lobbied the U.S. business community to take a gamble on Iraq’s long-term prospects as an investment venture. In August, more than $10 billion in nonbinding agreements with American companies ranging from Chevron to General Electric offered a particularly bright note. The U.S. government played a critical role in facilitating discussions between Iraq and the American private sector. Closure of the U.S. embassy would render a devastating vote of no-confidence in Iraq, and all but the most risk hardy in the U.S. business community would likely follow suit.

The U.S. threat to close the embassy in Baghdad imperils the U.S.-Iraq relationship. The administration is forcing a reform-minded leader to make an untenable binary choice: take on Iran-backed militias, militarily if necessary, or have the U.S. embassy shuttered and the bilateral relationship wither. An apparent Plan B to relocate embassy operations to the Kurdistan Region in the north or to al-Asad Air Base in the west has been met with a predictable response, as both locations have already come under direct and indirect Iranian fire. By its zero-sum approach, the United States risks enfeebling an ally and further empowering adversaries.

The central question for U.S. policymakers is whether the Iraqis have the capability and the will to fully and immediately stop militia attacks. At their 2007 peak of some 170,000 in-country, highly trained and equipped U.S. forces never completely halted Iran-backed attacks. The Iraqi security forces are overextended, underequipped, and still refielding and retraining from their 2014 collapse. Moreover, Iraq has been bedeviled by leaders who saw value in using, if not growing, the militia community for their own purposes.

Iraq today highlights the strategic consequences of tactical steps. Although Kadhimi is the first Iraqi leader willing to take on this entrenched, corrupt system from which Iran benefits, his preferred approach is an incremental one that will avoid sparking a confrontation he believes he cannot currently win. The administration has already dealt a devastating political blow—but to the wrong target. It would do better to coordinate closely and marshal the requisite collective support for Kadhimi, lest the Iraqi fence-sitters and Kadhimi’s adversaries judge he is fatally wounded by a withdrawal of U.S. backing.