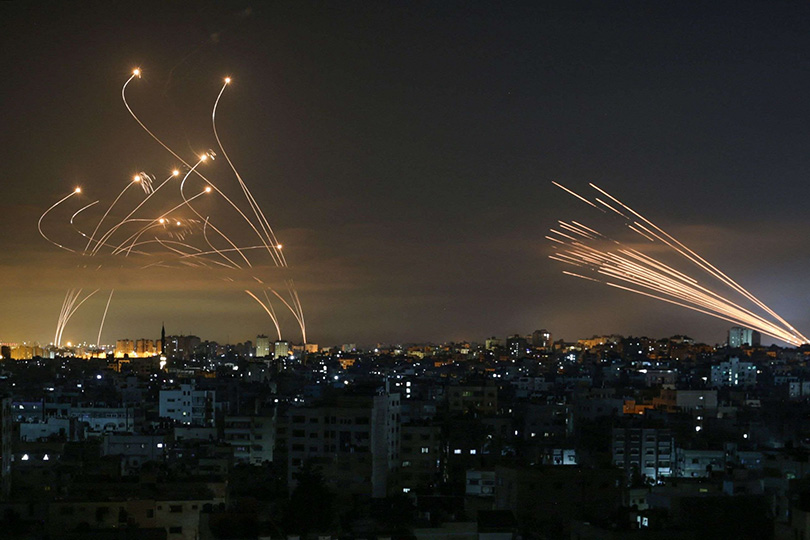 Although the ceasefire between Palestinian resistance and “Israel” appears to be holding, it is obvious from the recent conflict that the resistance organizations in Gaza has a vast rocket arsenal as well as the ability to build rockets inside its borders.

This analysis looks at the type of rockets that have been used, which ones have been built in Gaza, and their capabilities. It also looks at Israel’s Iron Beam anti-missile system and how the recent fighting may change Israel’s missile defense strategy.

Before going further, we want to look at the type of solid fuels used in these rockets because they determine the range and efficiency of the rockets.

The easiest fuel to make and the basic propellant for the Palestinian rockets made in Gaza, is what is commonly known as “Candy” propellants. These contain an oxidizer (usually Potassium Nitrate) and a sugar fuel (dextrose, sorbitol, or sucrose), which are cast by melting the constituents mixing them and pouring the liquid into a mold. These are low to medium specific impulse fuels and are frequently used in amateur rocketry. They have a specific impulse 30% lower than composite propellants that would be used in a more sophisticated rocket produced in Syria or Iran.

These sophisticated fuels use components like ammonium percholrate and aluminum or magnesium as a fuel. Some contain a rubber binder like Hydroxyl-terminated polybutane.

As one can see, using a simple rocket fuel will seriously degrade the performance and range of the Palestinian built rockets.

Rockets used by Palestinians in Gaza.

The oldest and most basic Hamas’s rocket design is the Qassam 1. It has a diameter of 115 mm, is 1.8 meters long, a range of 4.5 km and carries a warhead of 5 kg. It is made in Gaza and uses a “Candy” propellant. It is considered a less accurate rocket and has been superseded by better rockets.

This rocket is made in Iran and has better performance than the Qassam because of its composite propellant fuel. It is less than a meter long, is 107 mm in diameter, has a range of 8.5 kilometers and a 18 kilogram warhead. It is spin stabilized and is more effective than the Qassam 1.

The Qassam 2 has a longer range than the Qassam 1. It uses a “candy” propellant, is 1.8 meters long, 115 mm in diameter and has a 10 kg warhead. Like the Qassam 1, it is made in Gaza. However, it remains inaccurate and is unreliable. It is used to target populated areas.

This rocket is built in Iran or Syria and has a range of 30 km. It has a diameter of 122 mm, length of 2.8 meters and a warhead size of 18.4 kg. It uses a composite propellant. It can carry a chemical warhead.

This missile was first used this year and was responsible for 2 Israeli deaths and 60 injuries. 140 were fired. It is a new design, and little is known about it, however, its length is less than 3 meters and it has a range of 40 km.

The Fajr-3 is Iranian built but based on a North Korean design. It has a range of 43 km, a diameter of 240mm, a length of 5.2 meters, weighs 407 kg, and carries a 90kg fragmentation warhead that contains 4 to 5 kg of explosive (the rest is fragmentation materials). It is spin stabilized but doesn’t have any guidance system. Its composite propellant engine burns for 4 seconds and reaches over 530 meters per second.

This is an Iranian built rocket. Little is known about it. It is shorter than 3 meters and has a range of 55 km.

This is produced in Gaza, using smuggled Iranian components. It is less than 3 meters in length and has a range of 75 km.

This is a long range, one or two stage rockets with a length of 6.4 meters, with a diameter of 333mm. It has a 175 kg warhead and a range of 75 km. It is a Chinese design, and the critical components are made in Iran.

This rocket uses a double base propellant. These are usually compounding like nitroglycerin dissolved in nitrocellulose and have a specific impulse 10% higher than composite propellants. However, a study of the Fajr-5 exhaust indicates that the Iranians have added aluminum to the fuel, which causes metal oxide nucleation, which will also boost the specific impulse by another 10%.

Some pictures show it has movable nose fins that indicate it may have a guidance system. This is probably the Fajr-5C model, which uses GPS for guidance. Without the guidance system, it is very inaccurate.

There is no evidence that the Fajr-5C has been acquired by Hamas.

First fired in 2018. It has a length of less than 3 meters and a range of 80 km. It is produced in Iran and is reputed to be better at avoiding Israel’s Iron dome due to its trajectory.

First used against Ben Gurion International Airport in May. It is 5 meters long and has a range of 85 km.

This Iranian built rocket is about 3.5 meters long and has a range of 90 km.

This is a Syrian built rocket that can deliver a 150 kg warhead up to 180 km. It is 6.3 meters long and had a diameter of 302 mm. It can hit any target in the entire occupied Palestine.

Hamas recently announced that it was using a new rocket called the Ayyash. It is reported that it can reach all of “Israel” from Gaza and it is thought to have been used to hit Eilat. It is 7 meters long and has a range of 250 km. It was made in Iran and its range is due to its size and the use of component propellants.

Much is made of the number of Hamas rockets that penetrated the Israeli Iron Dome system. However, the psychological and political effects caused from the rockets has the same effect if not more than inflicting similar death toll that resulted from Air attacks by the Israeli planes on the Palestinians. Needless to mention, the tradeoff between expensive Israeli interceptors ($40,000 each) and cheap ($800 each) Hamas rockets meant that Israel has spent more money than Hamas.

However, it is also important to remember the limitations built into the system. It is designed to be part of a layered anti-missile system, including Arrow 2 & 3, Iron Beam, Barak 8 (a project between Israel and India), and David’s Sling that can intercept everything from long range ballistic missiles to drones.

One weakness that limits its sale to other nations is that each system only protects 100 – 150 square kilometers, which is ok for a small nation. Thus, it can only be part of a more extensive layered air defense.

Although the IDF claims that 90% - 95% of the missiles aimed at populated areas were intercepted and destroyed, the cost is proving to be a problem. As a result, Israel is pushing ahead on the Iron Beam System, which will defend against rockets artillery, and mortars. It will use a directed high energy beam to destroy targets up to 7 kilometers away. The cost is about $2,000 per shot compared to the $40,000 per interceptor used in Iron Dome.

Given its limited range, it will be a “point defense” weapon and hundreds would need to be deployed to protect all of Israel’s populated areas. That could make it as expensive as Iron Dome and its interceptors.

Iron Beam could be fielded along the Gaza border to destroy the rockets as soon as they are launched. However, the Iron Beam laser must remain fixed on the rocket for a couple of seconds to destroy it. Therefore, it is possible that the system could easily be swamped with more rocket targets than its laser could hit before they hit their targets. That makes it useful as a “last ditch” system that could target the few missiles that would lead through the Iron Dome. But it would not have the flexibility of Iron Dome.

The other problem is that Iron Beam has not been fielded yet. And, given the number of Hamas rockets that could be fired at one time, it may prove to be too limited for a practical rocket defense. Israel may prefer to design an advanced “multi-laser” system that could acquire and target several rockets at a time.

As one American analyst observed, “in the end, the best investments for Israel are bunkers for its citizens to cower in”.