One Chapter ends, Another One Begins 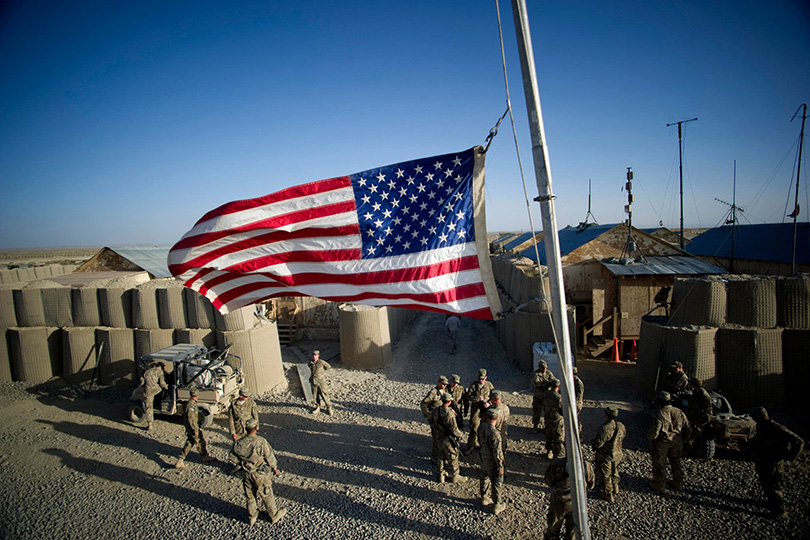 One Chapter ends, Another One Begins

In what one could call a “Middle of the Night” withdrawal, the US abandoned its largest military base in Afghanistan, Bagram air base, last week.

The sudden withdrawal surprised everyone, including America’s Afghan allies. The Afghanistan base command was unaware of the withdrawal until after the last American left.

The Afghans were left with a treasure trove of weapons like armored vehicles, small arms, and ammunition. The only problem was which Afghans would take possession of it. The Taliban started making rapid advances across the nation as pro-American Afghan soldiers abandoned their posts. The result was that the Taliban forces quickly found themselves with modern military equipment left behind by the US.

The rapid withdrawal sparked some criticism in the United States as video of the Taliban parading around with US equipment reached American TV.

However, that criticism ignored many of the facts on the ground. The US has already made it clear that they were in the final stages of withdrawal from Afghanistan. The only question was how the final stages of the pull out would take place. There was too much equipment on the ground to return to the US; a product of 20 years of war. Either the US troops would have to destroy it, which takes time, creates a public spectacle, and leaves the final group of troops vulnerable.

The other choice, which the US took, was to quickly and quietly pull out so the Taliban and other anti-American forces would have no chance to attack vulnerable US troops as they left.

The final panicked withdrawal of US forces from the top of the US Embassy in Saigon is still seared in the minds of many Americans. At least this was not the final image Americans would remember of Kabul.

However, the US still has not totally left Afghanistan. There is about a battalion of Army and Marines stationed at the US Embassy and the Kabul airport. Command of US forces in Afghanistan will revert to General Frank McKenzie, who is head of US Central Command. A new command structure will direct operations that do not deal with diplomatic security out of the US Embassy in Kabul.

The US Central Command said on Tuesday that most of the withdrawal was complete. “While the withdrawal is over 90% complete, it is not done,” said Pentagon spokesman John Kirby. “Temporary enabling forces remain in theater that are focused on providing security for a safe and orderly withdrawal. If these forces and certain contract support are still there, the withdrawal is still ongoing.”

The key to this new structure will be maintaining control of the Kabul airport. As a landlocked country with a poor road infrastructure, the airport is the key exit for any foreign interests in Afghanistan. Therefore, a large part of the US military presence will be at the airport.

However, the US is not the only nation with a battalion of forces remaining in Afghanistan. Turkey has agreed to help the US retain control of the Kabul airport. This was an important part of the talks between the US and Turkey at the NATO meeting last month.

Turkish Defense Minister Hulusi Akar spoke with American Secretary of Defense Lloyd Austin to work out details. Akar later said the two had constructive talks, but the details remain to be ironed out.

While the US will be providing airport security along with Turkish forces, the operation of the airport is in Turkish hands. The Afghans had asked for the Turkish help as one Afghan official said, “We don’t have the capacity to run the airport with Afghans alone due to the lack of expertise, nor do we have the financial ability to bring in private contractors.”

The Turkish deal includes $130 million per year, which is probably going to be paid by the US. This also includes a commitment by Turkey to defend the airport.

The US-Turkish deal appears to be helping relations between the two nations. Relations have been cooling with Turkey buying a Russian air defense system, the US cancelling Turkey’s participation in the F-35 fighter program, and operations in Syria.

However, Turkey’s help in Afghanistan is not as altruistic as it appears. Turkey and the Ottoman Empire have had good relations with Afghanistan for centuries. Afghanistan has been a critical part of Ankara’s attempt to limit Russian and Persian influence in Central Asia. The relationship was so tight that Afghanistan was frequently called “The Little Brother of the Ottoman State.” In fact, three hundred years ago, to weaken the Persian ruling family, the Ottoman’s recognized the chieftain of the Afghans Ashraf Hotaki as Shah of Persia.

Afghanistan became a modern state over a hundred years ago and it was Turkey that stepped in to help the new country with advisors and money to build infrastructure. The first public hospital was built in 1913 with the help of Ottoman advisors.

Ottoman advisors, with the concurrence of the Afghan ruling family, helped write the Afghan constitution, while including many more modern ideas of government.

Ankara’s help is also evident in the modernization of the Afghan Army. In 1920, Ottoman military leader Djemal Pasha came to Kabul to modernize the Afghan Army on more European lines, considering the lessons of WWI.

The relationship became very warm. Ghazi Khan would say when Turkey won its independence over Ottoman forces, “Turks and Afghans are brothers. Turks’ joy is our joy; their sorrow is our sorrow.

This relationship continued during the last 20 years. Although Turkey left the fighting to the other NATO countries, Turkey was involved in rebuilding the nation. In fact, Afghanistan has been Turkey’s largest international project. About 15,000 military and police officers have been trained by Turkey. There are 21 Turkish schools and four education centers helping over 7,000 students. Many NATO operations that dealt with non-military affairs and required familiarization with Islam and cultural affairs were handled by the Turks.

Given this background, it is not a surprise that Turkey is remaining in Afghanistan and keeping a military presence at Kabul’s airport.

This fits Ankara’s historical relationship with the Afghans and Erdogan’s wish to mold Turkey into a modern Ottoman Empire.

Although Turkey and Russia are currently on good terms, historically, the two nations have been at odds for the last several centuries. A strong position in Afghanistan gives it a border and influence in Turkmenistan, Uzbekistan, and Tajikistan. All three nations are considered critical in Russia’s (and China’s) desire to control central Asia.

Afghanistan also has a long border with Iran, which has been a competitor for influence in the Middle East.

And, although the US has withdrawn from Afghanistan, it still wants to have some influence in that country, while also limiting the influence of Russia and Iran. Therefore, it is natural that the US will support Turkey’s position in Afghanistan.

The next few months will be critical. If the Afghans government and the Turks can come to some sort of accommodation with the Taliban, it could help squeeze out Iran, who has helped the Taliban in the past to cause the US problems.

If the Taliban decides to try to control the whole of Afghanistan, it will have problems due to the nation’s tribal character. Turkey and Erdogan will not want to withdraw from the airport (and all foreign groups, who rely on the airport for an emergency exit and supplies). And, as was seen in recent events, it will be easy for the US and Turkey to supply arms to pro-western tribes to confront Iranian and Taliban.

It is also important to remember that US airpower remains just over the horizon in the Arabian Gulf. The Americans have made it clear that they are ready to carry out military operations in Afghanistan if necessary. If Turkey finds itself in trouble, it is expected to call for the nearest American aircraft carrier.

While the withdrawal of America from Afghanistan means the end of one chapter, the remaining Turkish influence means the beginning of a new chapter. This chapter may not have the combat operations of the past, but it will join the many chapters written in the past about Ottoman and Afghan cooperation. One factor should be considered is Taliban declared position that all foreign forces including Turkish must leave the country or will be forced out by military means.