Is Violence the Way to Fight Racism? 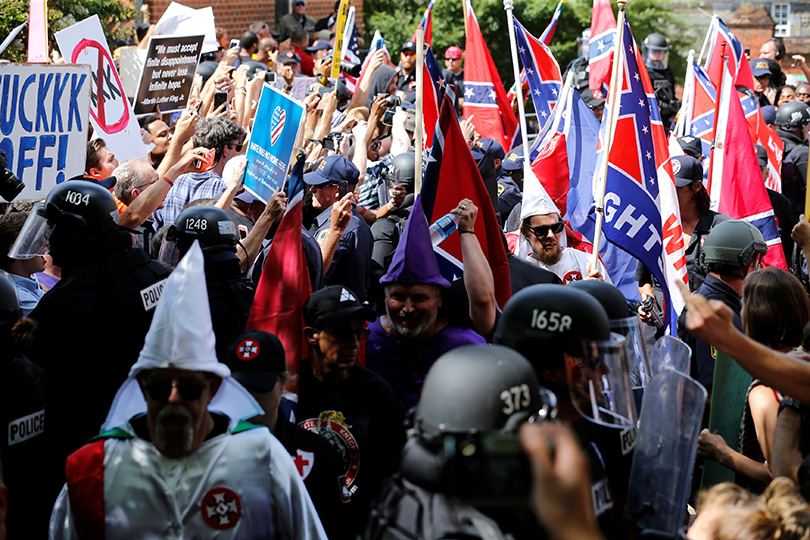 Should rallies by neo-Nazis and white supremacists be met with violence?

That question was raised by the tragic events in Charlottesville, Virginia, on August 12. White supremacists held a rally to protest the planned removal from a public park of a statue of Robert E. Lee, the leader of the Confederate army during the Civil War. A counter-protest was organized, and street fighting broke out. A woman, Heather Heyer, was killed and 19 people injured when James Fields, a white nationalist, drove his car at high speed into a crowd of counter-protesters.

At a subsequent press conference, President Donald Trump said that “both sides” were to blame for what happened. Trump’s apparent equation of racists and opponents of racism was condemned in the strongest terms, even by some leading Republicans. There can, of course, be no equating of neo-Nazis and white supremacists with those who oppose racism. But a close reading of the transcript of Trump’s remarks suggests that a more charitable interpretation is possible.

Rather than putting the racists and anti-racists on the same footing, Trump was saying that both sides were to blame for the violence that broke out. In support of that claim, he said that some on the left “came charging with clubs in their hands, swinging clubs,” and added: “Do they have a problem? I think they do.”

That statement still ignores the fact that a white supremacist used his car as a weapon, with lethal results. Nothing comparable was done by any of the anti-racists.

Still, it is true that, as journalists covering the event for The New York Times reported, some of the counter-protesters used clubs against white nationalists, one of whom left the park bleeding from the head. The Times was careful to note that many of the counter-protesters were non-violent, but in a subsequent article, the newspaper described the growth of a loose association of leftists who call themselves “antifa,” a term derived from “anti-fascist,” and are ready to fight neo-Nazis with sticks and fists.

In interviews, antifa activists explained their position. “You need violence to protect nonviolence,” said Emily Rose Nauert. “That’s what’s very obviously necessary right now. It’s full-on war, basically.” Other antifa activists said that it is not unethical to use violence to stop white supremacists, because they have already, by stirring up hatred against minorities, caused violent attacks on individual members of those groups.

The Times also spoke to anti-racist activists who disavow violence. They follow the example of the strictly nonviolent forms of civil disobedience successfully used in the civil rights movement during the 1950s and 1960s under the leadership of Martin Luther King. In contrast, antifa supporters say that racists and white nationalists are not rational, so there is no point in trying to persuade them that they are wrong. Physical force is the only thing that will stop them.

Let’s grant that the antifa activists are right about the irrationality of hard-core racist fanatics. It remains true that in the United States, and other countries where elections are the path to power, the far right can achieve its goals only by winning over middle-of-the-road voters. Even if many of these voters are also not completely rational – few people are – they are not likely to be won over to the anti-racist cause by seeing footage of anti-racists hitting racists with clubs or throwing urine-filled water bottles.

Such images convey, more than anything else, the idea that anti-racists are hooligans looking for a fight. Dignified nonviolent resistance and disciplined civil disobedience are more conducive to demonstrating a sincere ethical commitment to a better, non-racist society than clubbing people and hurling piss at them.

Violent resistance is particularly dangerous in the US because some states allow anyone to carry a firearm. In Charlottesville, a large number of white supremacists paraded through the streets dressed in camouflage and carrying semi-automatic assault rifles. If the antifa activists are going to match the racists in violence, will it be possible to hold the line at clubs? How long will it be before the deadly weapons now openly on display are also used?

Some antifa activists trace the origin of the movement to groups that fought against fascists in Europe in the 1920s and 1930s. In Germany, in the years before Hitler came to power, the Nazis’ paramilitary Sturmabteilung (Stormtroopers, also known as the “Brownshirts”) beat up, sometimes fatally, Jews and political opponents. In self-defense, the left responded with its own militias: the Communist Party’s Red Front Fighters and the Social Democrats’ Iron Front.

The result was an escalation of street violence, and a sense, among the wider public, that law and order were breaking down. Many came to believe that a firm hand was required to restore order and stability. A firm hand was exactly the image that Hitler was trying to project, and as the violence worsened, the Nazi vote rose. We all know how that tragedy played out.

Is it far-fetched to think that history could repeat itself in this way? To antifa activists who see violence as the answer to the far right, it should not be. They are the ones who are drawing the historical parallels. The Times quotes an antifa activist: “If we just stand back, we are allowing them to build a movement whose end goal is genocide.” If that is the danger, we need to find a better way of combating it than the tactic that so plainly failed in Germany.

* Peter Singer is Professor of Bioethics at Princeton University and Laureate Professor at the University of Melbourne.