Why Do Cartoon Villains Speak in Foreign Accents? 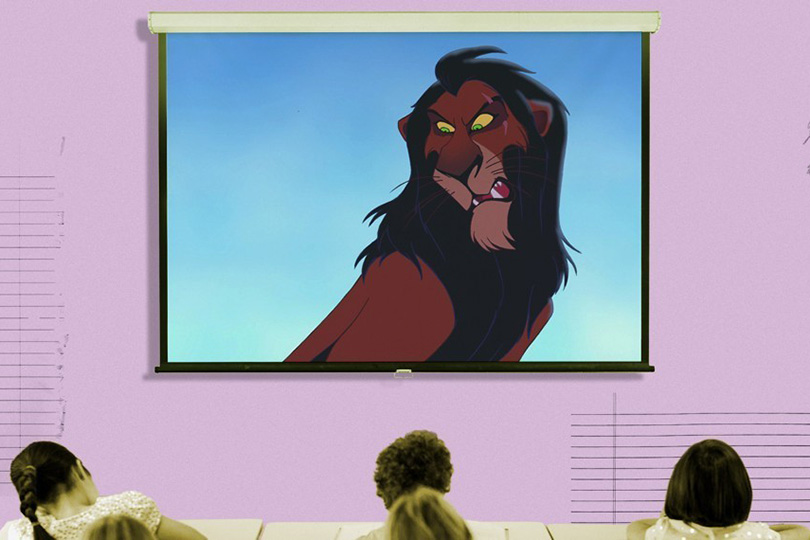 When the sociolinguist Calvin Gidney saw The Lion King in theaters two decades ago, he was struck by the differences between Mufasa and Scar. The characters don’t have much in common: Mufasa is heroic and steadfast, while Scar is cynical and power-hungry. But what Gidney noticed most was how they each spoke: Mufasa has an American accent, while Scar, the lion of the dark side, roars in British English. In a climactic scene in which Scar accuses Simba of being the “murderer!” responsible for Mufasa’s death, the final “r” in his declaration floats up into a sky bursting with lightning, and it’s hard to imagine it sounding quite as monstrous in another tone.

Gidney, an associate professor in child study and human development at Tufts University who specializes in sociolinguistics, saw Scar’s accent as part of a disturbing pattern in the film: Foreign accents and non-standard dialects were being used to voice all of the “bad” characters. Gidney also noticed that Scar’s minions, the hyenas, spoke in either African American English or English with a Spanish accent. Gidney found this trend concerning, especially since the theme of the movie could be described as “the ‘natural order of things,’” he said. “I thought it was really disturbing that it was necessary to ‘take back the jungle’ from the British-sounding evil lion, plus the African American-sounding and Latino-sounding hyenas.”

Gidney was inspired to embark on a study of language patterns in animated kids’ entertainment, teaming up with Julie Dobrow, a senior lecturer at Tufts who specializes in issues of children and media, to study how these trends play out on kids’ television shows. They’ve since analyzed about 30 shows and 1,500 characters, and they’re still at work on the project.

For their initial study in 1998, Gidney and Dobrow had a team of coders analyze 323 animated TV characters using measures such as ethnic and gender identification, physical appearance, hero/villain status, and linguistic markers. The coders tested a random sample of 12 shows, which spanned a variety of networks, air-times, and genres. Their findings suggested that lots of kids’ shows use language to mark certain traits in a given character. All but two of the shows studied correlated dialect (a term that refers here to any particular variety of a language) with characters’ personality traits in some way.

The kicker: In many of the cases studied, villains were given foreign accents. A modern-day example is Dr. Heinz Doofenshmirtz, the bad guy in Phineas and Ferb who speaks in a German(ish) accent and hails from the fictional European country Drusselstein. Meanwhile, the study found that most of the heroic characters in their research sample were American-sounding; only two heroes had foreign accents. Since television is a prominent source of cultural messaging for children, this correlation of foreign accents with “bad” characters could have concerning implications for the way kids are being taught to engage with diversity in the United States.

The most wicked foreign accent of all was British English, according to the study. From Scar to Aladdin’s Jafar, the study found that British is the foreign accent most commonly used for villains. German and Slavic accents are also common for villain voices. Henchmen or assistants to villains often spoke in dialects associated with low socioeconomic status, including working-class Eastern European dialects or regional American dialects such as “Italian-American gangster” (like when Claude in Captain Planet says ‘tuh-raining’ instead of ‘training.’) None of the villains in the sample studied seemed to speak Standard American English; when they did speak with an American accent, it was always in regional dialects associated with low socioeconomic status.

Some shows also gave foreign accents to comic characters, though British English was almost never used in this way. “Speakers of British English are portrayed dichotomously as either the epitome of refinement and elegance or as the embodiment of effete evil,” the study concludes. “What general sociolinguistic theory would suggest,” Gidney added, “is that American adults tend to evaluate British dialect … as sounding smarter.” Funny characters, on the other hand, often speak in German or Slavic accents (Dobrow offered as an example the associates of the evil Dr. Claw in Inspector Gadget), as well as in regional American dialects associated with the white working class.

Animated shows aren’t too careful in depicting how dialects actually work; they often use sloppy approximations of an accent as opposed to accurate renderings. The two generalized indicators of a Slavic accent, according to the study, are pronouncing words like “darling” as “dah-link,” and “we” as “vee.” Often, accents have a combination of features associated with a patchwork of nationalities. But what’s true in all of these cases is that the accent is portrayed as foreign in a way that’s clear to the viewer. To Gidney, the common denominator in all of these vague foreign accents is “the binary distinction of ‘like us’” versus “not like us.” “Villainy is marked just by sounding different,” he added.

But Gidney and Dobrow’s findings suggest that there’s something more specific at play than a general American bias against foreign accents. They said that the use of German, Eastern European, and Russian accents for animated villains is likely reflective of America’s hostility toward those countries during World War II and the Cold War. They have continued to find these same accent trends through the past few decades, even as the political and social climate changes and the nation’s zeitgeist is marked by different ethnic and global tensions. Gidney and Dobrow noted that, contrary to what researchers might have expected, children’s TV today is no more likely to use, say, Middle Eastern or Korean accents for villains than it was in the past. Slavic accents, German accents, and the like are still the voices of choice for “bad” characters.

Since the publication of their initial research, Gidney and Dobrow have expanded their study to better understand the rationale for accent trends by speaking with kids’ TV executives involved in casting and development. What they’ve been finding in conversations isn’t that the showrunners think this custom is “a good idea”; rather, “it’s a conventional idea,” said Dobrow. Dobrow and Gidney suggested that these showrunners are simply imitating the tactics of commercially successful shows. Rosina Lippi-Green, a linguist who has written on the uses of language in Disney movies, added that these tendencies likely have to do with the “age and training” of the showrunners themselves. In other words, showrunners may be making decisions on the basis of what was popular and successful in the shows they grew up watching.

Yet Dobrow and Gidney noted that stereotyped uses of language aren’t an industry-wide norm; they said that networks such as PBS make a concerted effort to prioritize racial and ethnic diversity and accuracy in their programming, and that progress is being made in the industry more broadly. Accent signaling is also a more subtle form of ethnic stereotyping that can coexist with improvements to the ways in which children’s shows depict the world and the people who occupy it; many of the shows that Gidney and Dobrow have studied in recent years feature a broader array of ethnicities or more females in traditionally male-dominated roles than do older shows—even shows that continue to use foreign-accent tropes. Take Kim Possible, for example: while the protagonist, Kim, is a female superhero, she also encounters many villains with non-American accents.

The next iteration of Gidney and Dobrow’s study will focus on how children are processing the messaging of animated television. They plan on having actors record basic sentences such as “please pass the water” using various dialects. The researchers will tell children ages 6 to 12 that they have a voice but aren’t sure what kind of character the speaker should be—whether it’s a villain, hero, jester, or so on—and they’ll have the kids make suggestions. The goal is to better understand kids’ tendencies in correlating dialect with character traits. It will be hard to ascertain whether kids’ perceptions are the result of television’s messaging or other sources of cultural messaging, but given the fact that TV is an important source of information for kids today, the researchers hypothesize that if they do find biases in kids’ responses that match up with the accent trends they’ve already found, then TV’s messaging has likely played at least some role.

Language tropes can have far-reaching consequences, both for kids’ perceptions of those around them and their understandings of themselves. Research has shown that kids use TV as a key source of information about other ethnic groups, as well as about their own ethnic and racial identities. Linguists have also found that not only do people make judgements about their peers’ intelligence and education levels based on language characteristics (with those who speak standard dialects usually being viewed as smarter and better-looking), but also that those judgments often shape how a person or group of people is treated. These patterns imply that when children see a correlation between evil and foreignness, or between evil and low socioeconomic status, there’s a good chance they are internalizing negative perceptions of themselves or other groups.

The study’s findings are noteworthy in part because television’s entertainment value makes it a particularly powerful mode of messaging: Kids are easily mesmerized by TV and willing to watch the same show over and over. Lippi-Green refers to entertainment as a “spoonful of sugar” with a sour aftertaste for in-the-know adults—TV and movies “take [bias] and pour concrete over it,” she said. “They etch it in.” That, according to Lippi Green, is because children learn through repetition. “You show them a pattern, you keep showing them that pattern … of course they’re going to assimilate that,” she continued.

Even civilization’s earliest storytellers likely used accents as markers of the “foreign,” Lippi-Green said. From the beginning, “people who were the best storytellers changed their voices”—doing so is, after all, one of the easiest ways to effectively mark an outsider.

So what are parents to do with the knowledge that many kids’ TV shows and movies are brimming with cultural biases? Dobrow points to intentional, collaborative TV-watching. “What’s really important is to be able to make your children into media-literate viewers,” she said. “If a parent or sibling or caregiver is there with a child watching television or a film, this ... can make anything into an educational experience.”