The End of Europe’s Chinese Dream 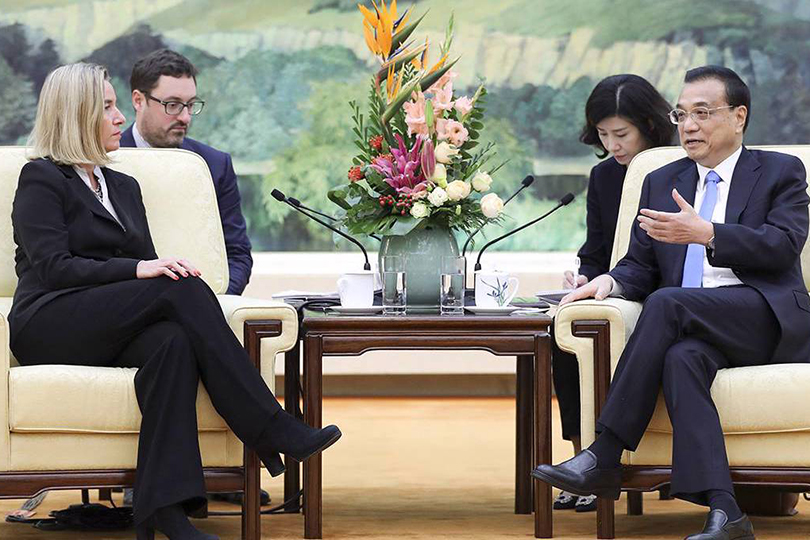 The COVID-19 crisis has pushed Europeans strategic thinking about China – already shifting because of three developments – past the tipping point. After years of pursuing closer bilateral economic ties, Europeans suddenly realize that they have become dan

The COVID-19 crisis has pushed Europeans' strategic thinking about China – already shifting because of three developments – past the tipping point. After years of pursuing closer bilateral economic ties, Europeans suddenly realize that they have become dangerously dependent on Chinese trade and investment.

A paradigm shift is taking place in relations between the European Union and China. The COVID-19 crisis has triggered a new debate within Europe about the need for greater supply-chain “diversification,” and thus for a managed disengagement from China. That will not be easy, and it won’t happen quickly. But, clearly, Europe has abandoned its previous ambition for a more closely integrated bilateral economic relationship with China.

In the past, when Europeans sought trade, economic-, and foreign-policy reforms vis-à-vis China, their hope was always to increase contact with the country while making the relationship fairer and more reciprocal. The basic goal was to expand bilateral trade and pry open the Chinese market for European investments. Even when the European Union toughened its approach toward China, its objective was still to deepen economic ties with the country. The creation of new EU instruments to screen investments and enforce antitrust measures were presented as regrettable but necessary measures to create the political conditions for closer cooperation.

In a report published earlier this month, Andrew Small of the European Council on Foreign Relations argues that the EU’s engagement with China will henceforth have a new purpose: to structure the Sino-European relationship in a way that reduces Europe’s dependence on Chinese trade and investment. The new consensus is that Europeans should be more insulated from the whims of unreliable or overbearing foreign governments, whether in Beijing or Washington, DC.

This new thinking is evident in statements from the EU’s top officials. For example, Josep Borrell, the EU High Representative for Foreign Affairs and Security Policy, recently called on Europeans to shorten and diversify their supply chains, and to consider shifting their trade ties from Asia to Eastern Europe, the Balkans, and Africa. Sounding a similar note, the EU’s competition czar, Margrethe Vestager, wants to change state aid rules to protect European companies from Chinese takeovers.3

For their part, most European governments did not want a change in strategy. Until now, they have been heavily invested in developing a cooperative relationship with China; on a practical level, they are desperate for Chinese-made medical supplies to get them through the pandemic.

Nonetheless, three factors have altered Europe’s strategic calculus. The first is a long-term change within China. The EU’s previous China policy was based on the so-called convergence wager, which held that China would gradually become a more responsible global citizen if it was welcomed into international global markets and institutions.

Instead, the opposite has happened. Under President Xi Jinping, China has become more authoritarian. As the Chinese state has increased its role in the economy and Chinese markets have become less hospitable to European companies, Xi’s signature policies – Made in China 2025, China Standards 2035, and the Belt and Road Initiative – have not only forced European companies out of the Chinese market, but have also exported China’s model abroad. China is no longer merely competing for a share of low-value-added production. It is quickly climbing up the global value chain, and penetrating the very sectors that Europeans regard as central to their own economic future.

Second, the United States has increasingly adopted a more hawkish view of China, particularly since US President Donald Trump entered the White House. Well before the pandemic, a broader “decoupling” of the US and Chinese economies seemed to be underway. This change came rather abruptly, and was a shock to Europeans, who suddenly had to worry about becoming roadkill in a Sino-American game of chicken.

Consider the way many European states are struggling to placate both the US and China over the Chinese tech giant Huawei’s role in building European 5G networks. In theory, Europe’s new skepticism toward China should have paved the way for closer transatlantic cooperation on this issue. But by assailing Europe with tariffs, secondary sanctions, and other unprovoked attacks, the Trump administration has muddied what should have been a clear choice.

But the third (and most surprising) development has been China’s behavior during the pandemic. After the 2008 global financial crisis, China seemed to rise to the occasion as a responsible global power, participating in coordinated stimulus efforts and even buying up euros and investing in cash-strapped economies. Not this time.

Consider one telling episode from the pandemic. Early this year, as the coronavirus was raging through Wuhan, EU member states shipped nearly 60 tons of medical equipment to China. Much of this came from national strategic stockpiles, and it was sent discreetly, at China’s behest. By contrast, when the pandemic arrived in Europe, the Chinese government made a big show of offering “aid” to Europe – much of which actually came with a price tag.

Worse, China has been using the cover of the COVID-19 crisis to pursue politically controversial economic deals, such as a Chinese-financed Belgrade-Budapest railway plan that was smuggled through Hungary’s legislature as a part of its COVID-19 emergency package. Similarly, Huawei has been loudly making the case for why the crisis justifies an even faster 5G rollout. And in the United Kingdom, a Chinese state-owned venture-capital fund recently tried to take control of one of the country’s top chipmakers, Imagination Technologies.

Most disturbing of all, however, has been China’s exploitation of health needs to advance its own petty political interests. For example, Chinese officials have warned the Netherlands that shipments of essential medical supplies may be withheld in retaliation for the Dutch government’s decision to change the name of its diplomatic office in Taiwan.

Since the crisis erupted, the EU has shown more of a willingness to push back against Chinese disinformation campaigns, and has adopted measures to protect distressed European companies from being bought out by Chinese investors. But the most serious moves are yet to come. Europeans will soon start turning the talk of “diversification” into action.

One way or another, the structural changes working through the global order may have eventually produced a new debate about China anyway. But now that COVID-19 has laid bare both Europe’s dependencies and China’s true intentions, a strategic shift is well underway.